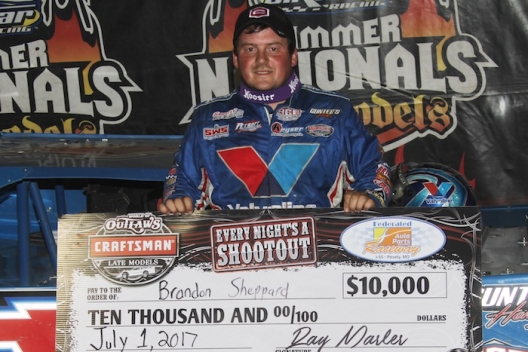 PEVELY, Mo., (July 1) — Charging to the front of the field at the drop of the green flag, Brandon Sheppard of New Berlin, Ill., led the entire 50-lap distance to earn a $10,000 payday in Saturday’s World of Outlaws Craftsman Late Model Series-UMP DIRTcar Summernationals showdown at Federated Raceway at I-55.

With Sheppard powering from his second-starting spot to cruise over the field in the early running, a three-car battle ensued for the runner-up spot between Rick Eckert of York, Pa., Brian Shirley of Chatham, Ill., and Bobby Pierce of Oakwood, Ill.

The battle for the second-place spot continued at the halfway mark, with Shirley moving past Eckert in to the runner-up position on lap 26 as Pierce and Tyler Erb of New Waverly, Texas, traded sliders for third.

A yellow flag flew on lap 28, slowing the field and the tight race for the second-place spot. Sheppard held his lead on the restart, with Pierce and Shirley making contact as Shirley moved back in to the runner-up position on lap 32.

The chaos continuing to unfold at the front of the field, a red flag fell on lap 42, as Shirley, third-running Chris Madden of Gray Court, S.C., Erb and Frank Heckenast Jr. of Frankfort, Ill., tangled in turns three and four, resetting the top five with just eight laps remaining.

Sheppard held off ninth-starting Eric Wells of Hazard, Ky., in the final circuits to score his eighth World of Outlaws victory of the season and second straight Summernationals triumph.

“We had a really good race car,” Sheppard said in victory lane. “Them guys were coming on the bottom. I was kind of nervous to get off the top there. I felt like I had a pretty good rhythm going once we got going. But I think that bottom was definitely getting better.

“The car was pretty good,” Wells said. “I felt good in the heat race. I wasn’t married to the cushion. Tonight we never really got up there. I could run the middle and bottom. We’re getting closer with this new car."

Eckert was happy to have avoided the late-race collision that knocked several front-runners out of the race and come away with a podium finish.

“That wreck happened about 15 times and just finally happened,” Eckert said. “I lost a couple of spots trying to miss it the times that it didn’t happen. It was a gift to us because we were back through the field there. I kept getting off that top because I through they were crashing. Finally they did and I was lucky enough to be far enough away from it."

Notes: Sheppard scored his second consecutive Summernationals victory and eighth World of Outlaws victory of the season. He was the winner of Thursday’s Hell Tour stop at Plymouth Speedway. … The first yellow flag waved on the opening lap when Logan Martin spun in turn four; because no laps were completed he returned to his fifth-starting spot. … Sixth-running Kyle Bronson slowed on the backstretch to draw a caution on lap 28.  … A yellow flag flew on lap 39 when third-running Bobby Pierce slowed with a flat tire. … A red flag fell on lap 42 for a tangle in turns three and four involving Brian Shirley, Chris Madden, Tyler Erb and Frank Heckenast Jr., who were all running among the top five. ... The World of Outlaws Craftsman Late Model Series and UMP DIRTcar Summernationals tour hosted a co-sanctioned event for the first time. ... The WoO tour returned to Pevely for the first time since 2013, while the Hell Tour’s last I-55 event was held in 2014.

Rolling around the high side, outside polesitter Billy Moyer Jr. took an early lead, as Morgan Bagley and Chase Junghans challenged Shannon Babb for the second-place spot. Moyer Jr. sailed over the field at the halfway mark, with Junghans reeling in second-running Babb. Moyer Jr. won the consolation, with Babb holding off Jungians to run second and transfer to the feature.

Working the bottom of the racetrack, third-starting Brian Shirley slipped ahead of Billy Moyer exiting turn two to lead the opening lap, with a yellow flag waving seconds later for a fronstretch collision involving Brent Larson and Dewayne Kiefer. Shirley held his lead on the restart, as Moyer and Gordy Gundaker battled for the third-place spot. Starting at the rear of the field, Devin Moran slid past Gundaker to run in fourth on the third lap. Shirley pulled away from the field to win the fourth heat, with Frank Heckenast Jr. running second. Moyer finished third, with Moran running fourth to transfer to the feature.

Charging to the front of the field at the drop of the green flag, polesitter Kyle Bronson took an early lead, as third-starting Tim Manville slid ahead of outside polesitter Bobby Pierce in turn four to run second. A yellow flag waved on lap three when second-running Manville jumped the cushion in turns one and two, with a charging Pierce making contact with the slowing No. 33. Manville tagged the rear of the field with both cars continuing the race. Using the restart to his advantage, Chris Madden slipped past Bobby pierce to run second, with Pierce retaking the spot one lap later. Bronson won the third heat, with Pierce and Madden rounding out the podium. Michael Kloos took the fourth and final transfer spot.

Polesitter Rick Eckert shot to an early lead, as Chub Frank advanced from his fourth starting spot to battle Tyler Erb and Morgan Bagley for the second-place position. Eckert stretched his lead at the halfway mark, as Frank continued to run side-by-side with Bagley. Eckert won the second heat, with Erb finishing second. Frank ran third, with Shane Clanton edging ahead of Bagley in the final laps to run fourth and transfer to the main event.

Sliding ahead of polesitter Logan Martin in turns three and four, second-starting Brandon Sheppard led the first lap, with Martin attempting to slide back to the front one circuit later. Third-starting Eric Wells quickly joined the battle up front, running side-by-side with Martin for the runner-up spot. Sheppard won the heat race, with Martin pulling ahead from Wells in the final laps to run second. Wells ran third, with Kent Robinson grabbing the fourth and final transfer spot.

Home-state driver Logan Martin of West Plains was the night’s overall fast qualifier, tripping the clock with a time of 12.760. Allen Murray of San Antonio, Texas, and Devin Moran of Dresden, Ohio, were among drivers failing to clock a time. Murray got in to the turn-one wall during his first lap, while Moran jumped the cushion in turns three and four, hitting the wall and exiting the track with heavy damage to his No. 9 machine.

With 41 cars on hand, the car count is up two from the Summernationals last I-55 event in 2014. ... After picking up a Friday victory at Tri-City Speedway in Granite City, Ill., Kent Robinson of Bloomington, Ind., joins WoO and Summernationals competitors at I-55. … Former I-55 WoO and Summernationals winners on hand for Saturday’s event include Billy Moyer of Batesville, Ark., and Shannon Babb of Moweaqua, Ill. Shane Clanton of Zebulon, Ga., is also a former World of Outlaws winner at the Pevely, Mo., oval. … Rocket house car driver Brandon Sheppard of New Berlin, Ill., was the winner of Thursday’s Summernationals first-ever visit to Plymouth (Ind.) Speedway. … Entering Saturday’s event, Billy Moyer Jr. of Batesville, Ark., tops the week-long Summernationals points standings presented by U-Pic-A-Part. He picked up a win in Tuesday’s Hell Tour stop at Charleston (Ill.) Speedway. … World of Outlaws competitors will finally complete a full show after Wednesday and Friday’s events at Dirt Oval Route 66 Raceway in Joliet, Ill., and Terre Haute (Ind.) Action Track were washed out. … Rusty Griffaw of Festus, Mo., currently tops the I-55 points standings, while Rickey Frankel of Quincy, Ill., was the winner of the track’s most recent weekly event on June 24.

With Friday’s co-sanctioned event at Terre Haute (Ind.) Action Track rained out, the World of Outlaws Craftsman Late Model Series and UMP DIRTcar Summernationals tour moves to Federated Raceway a I-55 for a $10,000-to-win event. The two tours are set to face off for the first time after last year’s co-sanctioned events were washed out.

World of Outlaws competitors return to I-55 for the first time since 2013, where Josh Richards of Shinnston, W.Va., picked up the victory. Brian Birkhofer of Muscatine, Iowa, was the winner of the Summernationals most recent stop at the Missouri oval back in 2014.

Billy Moyer of Batesville, Ark., and Shannon Babb of Mowequa, Ill., are among drivers who have scored both WoO and Summernationals victories at I-55. Moyer’s most recent win came in 2012, while Babb’s last came in 2010.

Saturday’s program will include time trials, heat races, consolations and the 50-lap main event. UMP modifieds and DIRTcar pro modifieds will also be in action. Hot laps are slated for 6:15 p.m. Central.