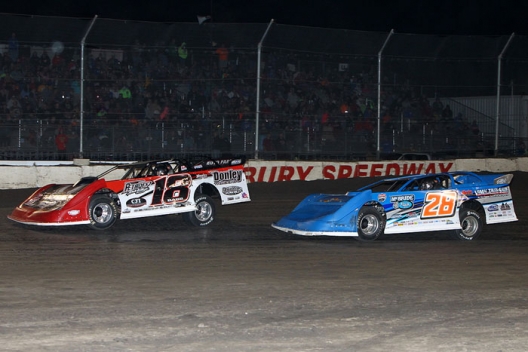 FAIRBURY, Ill. (June 24) — Surging into the lead from the second row on the opening lap, Shannon Babb of Moweaqua, Ill., led all 50 laps of the UMP DIRTcar Summernationals main event at Fairbury American Legion Speedway on Saturday night. Babb earned $10,000 for his 92nd career Summernationals victory.

Dennis Erb Jr. of Carpentersville, Ill., started sixth and followed the fourth-starting Babb directly to the front. Erb then chased him for 50 laps, but neither clear track, nor heavy traffic aided in his effort to get by the dominant machine of Babb, who enjoyed a lead as large as three seconds at the halfway mark. Erb Jr. finished second ahead of Chris Simpson of Oxford, Iowa. Brent Larson of Lake Elmo, Minn., ran a solid fourth, while 10th-starting Billy Moyer Jr. of Batesville, Ark., finished fifth.

From the outside front row, series points leader Bobby Pierce of Oakwood, Ill., took the initial lead ahead of pole sitter McKay Wenger of Fairbury. But Pierce never led a lap as Babb rocketed to the head of the field exciting turn two, bringing Erb with him. At the completion of the first lap, Babb was already in front and Erb, who started back on the third row was in his tracks.

Babb caught backmarkers by lap 10, but negotiated lapped traffic masterfully during the first half of the race. He then withstood a pair of cautions in the final 22 laps to keep Erb at bay.

“It was a nice drive,” said Babb. “I figured I had it set up for the middle. I knew Bobby was gonna be really hard to beat on top. Once I got by him I was really surprised. The car was … this Rocket Chassis has been awesome and we’ve been working on it a little at a time and it’s really, really good. They went out and tickled the track a little bit, or watered it anyhow … did like there normal preparation and I’m never really good at stopin’ and goin’ on the bottom so I just went right through the momentum in the middle and it just stuck really good.”

Babb worked the middle of the track throughout the race, rarely moving up unless traffic was an issue. Erb managed to pull to within two car lengths on lap 15. Four laps later, Babb was in heavy traffic and Erb was stuffed under his rear deck. With Babb’s car working so well from the middle down, however, the leader dared not step to the outside, especially on a racing surface that became more and more bottom dominant as the 50-lapper wore on.

“Dennis, I seen him in second. I’ve seen him pass a lot of cars here on five (laps) to go, so it wasn’t over ’til it was over,” added Babb. “He had me a little tense.”

While he could close in on the leader in traffic, there was little opportunity for Erb to make a winning pass. A day after stalking Tony Jackson Jr. for 39 laps before making a winning move to the outside at Tri-City Speedway in Granite City, Ill., Erb couldn’t muster any last-lap magic at Fairbury. He was just happy he could follow Babb to the front at the start of the race.

“Just the way the race track was, I mean it rubbered up. I knew we was gonna have to be aggressive at the start to get out there with him,” said Erb. “Luckily we got out there right behind him and ran one-two the whole race. I tried (to pass) him on those restarts a couple times, but we just couldn’t get it done. You hope you can get a shot there on that restart, maybe he’d push or something. But he had a good car too and he was able to get out there and cruise.”

Erb tried to nose under the race leader following restarts on laps 29 and 37, but he simply didn’t have enough traction on the bottom of the track to make it work.

“It was slick down there, really nothing to get ahold of,” he said. “And then up top (it) was real crumbly, so we were kinda right in that one lane that we all ran and it just seemed like, like the race track just took rubber and there was really nothing to do.”

The frontrunners repeatedly pulled away from third-place Simpson, who traded that spot with Pierce during the first half of the race. But when Pierce tangled with the lapped car of Tim Manville, bringing out the second caution, the points leader was sent to the end of the lead lap cars and was not a factor over the final 20 circuits. Simpson then stayed comfortably in front of Larson the rest of the way.

“We were alright,” Simpson said. “We didn’t really know where to go ‘cause we kept the car free in the heat race and we were pretty good in the heat. You know we rolled up there and passed (Billy) Moyer and put some distance between him. I feel like what we did to the car will definitely help us when we come back for the (Prairie Dirt Classic) so I’m happy.”

Notes: Four drivers have at least three Summernationals wins at Fairbury. Billy Moyer of Batesville, Ark., leads the way with seven, while Babb now has four. Jimmy Mars and Kevin Weaver have three each. … Fairbury hosted the series for the 28th time. … Sixteen cars were running at the finish. Eleven cars finished on the lead lap, while the other five were just one lap down. … The race was slowed by three cautions. Gordy Gundaker slowed on lap four; Pierce and Manville tangled on lap 28; the final yellow waved on lap 36.

Local favorite McKay Wenger drew the pole for the main event and will start alongside defending Summernationals champion Bobby Pierce. The 10-minute call was made at 9:40 p.m. as track officials touched up the race track with some last-minute prep. Gordy Gundaker and Dustin Nobbe took series provisionals, while TIm Manville took the DIRTcar national points provisional and Glen Thompson took the track provisional.

Working around the hub the entire distance, Mike Spatola eased by race-long leader Gordy Gundaker on lap nine and went on to win the race. Working on the high side, Ryan Unzicker edged Gundaker at the stripe to grab the last transfer spot. Gundaker finished third, and will use a series provisional to start the feature. The top three cars pulled away in the 12-lap race slowed by a single caution.

Hometown driver McKay Wenger picked up a victory in the final heat, emerging from a three-wide battle with Brian Shirley and Tim Manville. Shirley crossed the finish line in second, but was 24 pounds light at the post-race weigh-in, giving the second position to Matt Furman. Fifth-starting Billy Moyer was credited with third, while Jeremiah Hurst took the last transfer spot. The race was slowed by three cautions. Terry Starks brought out the first yellow when he spun in turn two. Tim Manville was running in a transfer spot when he spun in turn one, bringing out the second caution on lap five. The final yellow waved for Dustin Nobbe on lap eight.

Shannon Babb grabbed the lead on the opening lap from outside row one and cruised to an easy win over Daniel Flessner. Babb pulled away to win by .290 seconds. Michael Floss was third, with Kevin Weaver grabbing the final transfer spot. Taylor Scheffler spun, drawing the only caution.

As the third driver to hit the track during qualifying, Daniel Flessner of Roberts, Ill., put the UMP DIRTcar Summernationals touring drivers on notice with a quick lap of 12.822 around Fairbury's 1/4-mile oval to earn the pole for the first heat race. Other heat race polesitters include Bobby Pierce of Oakwood, Ill., Billy Moyer Jr. of Batesville, Ark., and Tim Manville of Troy, Ill. Moyer Jr. was the fastest qualifier in the second group with a mark of 13.075. ... Taylor Scheffler of Waukesha, WIsc., would have started on the second row of the first heat, but his qualifying time was disallowed when he was light at the scales. Scheffler will drop to the rear of the first heat.

Fairbury American Legion Speedway hosts Saturday's ninth round of the UMP DIRTcar Summernationals with a $10,000-to-win purse on the line at the 1/4-mile oval.

Bobby Pierce of Oakwood, Ill., leads Billy Moyer of Batesville, Ark., and Ryan Unzicker of El Paso, Ill., as he aims for a third consecutive Hell Tour crown. Unzicker has a pair of wins at Fairbury this season, including June 10's Pappy and Bob Allen Memorial.

Hot laps, time trials, four heat races and at least one consolation race precede the night’s main event with a starting field of at least 22 Super Late Models. Modifieds and UMP stock cars are also on the card.

Fairbury is hosting the series for the 28th time. ... Twelve drivers have entered the eight series races heading to Fairbury. … Jose Parga, who missed two races due to eye surgery, is back with the tour. Parga of New Berlin Ill., received UMP emergency points for the two races he was forced to sit out. … Billy Moyer of Batesville, Ark., who is second in series points entering Fairbury, has seven series victories at FALS. … Dustin Nobbe is making his first appearance at Fairbury. The 21-year-old from Batesville, Ind., said the track was about what he expected after practice. “It’s fast, but in the car it doesn’t seem that fast,” Nobbe said. “When you’re used to racing at Eldora and Florence (Ky.), it seems like you’re puttin’ out there.” Before this year’s Summernationals, Nobbe, who is currently 10th in series points, had never raced in the state of Illinois. ... There hasn’t been a repeat Hell Tour winner at FALS in the last six races. … Shannon Babb of Moweaqua, Ill., is the last repeat Summernationals winner at Fairbury (’15, ’10). … Other recent winners: Moyer (’14), Ryan Unzicker (’13), Brian Shirley (’12) and Rodney Melvin (’11). … Dean Carpenter of Coldwater, Miss., joins the series for the first time in ’17. … Jeremiah Hurst of Dubuque, Iowa, has joined the Hell Tour at Fairbury.