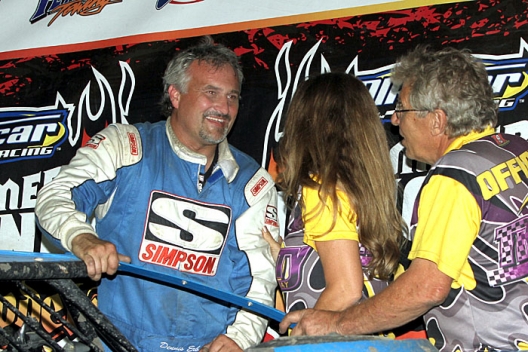 Erb made his car stick in the middle groove on the last lap, allowing him to slip around the low-running Jackson exiting turn four and giving the Carpentersville, Ill., driver $10,000 and his 21st career series victory.

Erb won by less than a length — eight-hundredths of a second according to transponders — to deny Jackson his first series victory after leading 39 laps from outside the front row.

“It must’ve been fun for everybody else, and not really for me,” Erb said after thrilling fans at the 3/8-mile oval. “We were working him pretty hard there.

“We were rolling real good in that middle there before that (lap-20) caution came out, and I just knew once the car kept going and I got heat in the tires, we were doing alright in the middle. (The surface) started getting a little dirty coming off (turn) four there, but I had to do something on that last lap.”

Erb had made high- and low-side bids on Jackson over the final 15 laps, while Simpson took a couple of shots at Jackson as well. The Lebanon, Mo., driver regretted sticking with the low groove virtually all race long.

“I needed to move up,” Jackson said, “but it’s one of them deals when you lead 39 of 40 laps on the bottom, you hate to get out of your groove.”

Erb and Jackson both slid higher than usual in turn four on the final lap, and Erb’s higher side momentum carried him to victory with Simpson, of Oxford, Iowa, just eight-tenths of a second behind in third. Shannon Babb of Moweaqua, Ill., and series points leader Bobby Pierce of Oakwood, Ill., rounded out the top five.

“I knew it was a tight battle, and I knew there late in the race we’d have people coming up behind us,” Erb said “It just all worked out for us tonight.”

While Jackson broke into the early lead, polesitter Tim Manville held the second spot 17 of the first 18 laps with Simpson, Babb and Pierce among drivers in a dogfight behind the frontrunners.

Manville’s flat tire on lap 20 knocked him from contention and brought out the race’s lone yellow as Jackson led the field back to green with Simpson and the seventh-starting Erb hot on his heels. Pierce briefly rode the high groove into the fourth position, but Babb took it right back on lap 24 as things continued to heat up among the leaders.

Simpson and then Erb and then Simpson and then Erb took their shots at Jackson, who managed to maintain the lead even with the top three all within a few lengths during the final 10 laps. Erb summoned his best charge for the final laps, nearly pulling alongside Jackson on the backstretch before rolling around him in turns three and four before winning the dash to the checkers.

Tim Manville of Highland, Ill., drew the pole position for the 40-lap feature, and the winners redrew the top four spots in the same order they won their heats. There was some discrepancy with the first printed lineup that had Shannon Babb starting second, but he knew he'd drawn the third spot. Babb came to the series trailer to check with series director Sam Driggers, confirming he was third. “Not that I should’ve told you about it,” Babb cracked about the incorrect lineup. … Series points leader Bobby Pierce said his engine sounded funny in Thursday’s victory at Spoon River, and he was right. The team hot-lapped the same car at Tri-City but switched to his other car for time trials and racing action. … Because series regular Gordy Gundaker’s team wasn’t able to finish his engine swap before the consolation race, Gundaker drove Scott Geaschel’s car in the B-main (he was required to take at least one lap in a preliminary race to be eligible for a provisional starting spot for the feature, which he got). Gundaker will start on the tail in his own car in the feature, provided it's ready to go.

Bobby Pierce snuck ahead off turn two on the first lap and raced to victory from outside the front row. He built a half-straightaway lead after two laps, leaving polesitter Billy Moyer Jr. to fend off Ryan Unzicker. The younger Moyer held on to second with Unzicker and Rickey Frankel getting the other transfer spots. Jose Parga pulled away from an early duel with Raymond Merrill in finishing fifth.

Shannon Babb won an early lead-swapping duel with fellow front-row starter Brian Shirley to grab a 10-lap victory. Shirley fell a straightaway behind Babb in the final laps but held onto second while Michael Kloos wasn't far behind in third. Dustin Nobbe got the fourth and final transfer spot in the caution-free heat after a lengthy battle with Paul Stubber more than a half-track behind Babb.

Tony Jackson Jr. became the second straight outside front-row starter to win a heat, getting the jump on Dennis Erb Jr. and turning back a mid-race charge from the polesitter to win Erb pressured Jackson from the low groove mid-race, but couldn't hang on after briefly slipping ahead. Jason Feger reeled in the top two late in finishing third while Kolby Vandenbergh got the final transfer spot. Billy Laycock was far behind in fifth.

Using his high-side runs exiting turn two, outside front-row starter Tim Manville raced to victory in the first 10-lap prelim. Polesitter and fast qualifier Chris Simpson had to settle for second with second-row starters Billy Moyer and Brent Larson getting the other two transfer spots as Moyer dove under Larson in turn three just past halfway. Oregon's Rob Mayea was a distant fifth.

Chris Simpson of Oxford, Iowa, topped 33 qualifiers at Tri-City to earn the pole starting position for the first heat. He tripped the clock in 14.872 seconds.

Tri-City Speedway hosts Friday's eighth round of the UMP DIRTcar Summernationals with a $10,000-to-win purse on the line at the 3/8-mile oval.

Hot laps, time trials, heat races and at least one consolation race precede the night’s main event with a starting field of at least 22 Super Late Models. Modifieds and B-mods are also on the card.

The 33-car field is 13 fewer than last year. … Gordy Gundaker, hampered by engine problems in recent races, lost a motor in hot laps. His team went to work swapping powerplans. To pick up as many points as he can, he also has the option of trying to find another driver’s backup car to at least take a lap in a preliminary event. … Jose Parga, who has been out of action under doctor’s since getting a piece of metal in his eye while working on his car Monday, returned at Tri-City. … Kolby Vandenbergh of Ashland, Ill., has also returned to the tour. He missed several races awaiting engine repairs. … Mark Voigt of nearby Marine, Ill., was back to Tri-City after scratching early in Thursday’s program at Spoon River Speedway. … Because Tri-City co-promoter Tammy Gundaker thought the series had a flagger, and because the series thought Tri-City had a flagger, UMP DIRTcar official Erik Grigsby was pressed into service in the flagstand just before hot laps. … Eric Huenefeld, 32, the weekly announcer at Rockford (Ill.) Speedway, ends an eight-race stint behind the microphone with the Summernationals at Tri-City. 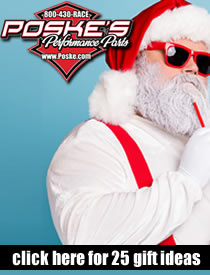