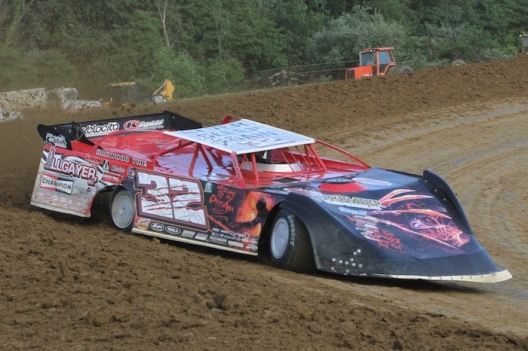 BANNER, Ill. — Not only was Bobby Pierce winless in UMP DIRTcar Summernationals action at Spoon River Speedway entering Thursday's event, the Oakwood, Ill., driver had a bit of a raw memory from his 2014 series event at the 3/8-mile oval.

Starting sixth three years ago, Pierce’s No. 32 clipped an infield tire barrier in turn four on the original start, forcing him out of the race as the last-place finisher.

Pierce pushed that mistake — and five other series losses at Spoon River — into the far recesses of his memory by leading the final 21 laps of Thursday’s 40-lap feature that paid $5,000 and improved his chances of a third straight Summernationals title.

“We’ve been close a couple of times (at Spoon River),” said Pierce, who previously had two top-five finishes including a third-place run last year. “I think three years ago I knocked the left-front off before I took the green … so to get the win here tonight feels awesome.”

Starting sixth again, Pierce got rolling on the high side before the halfway point, grabbing the runner-up spot on the 17th lap and then sweeping around race-long leader Dennis Erb Jr. of Carpentersville, Ill., on the 20th lap.

From there, only a lap-30 caution for slowing polesitter Brian Shirley of Chatham, Ill., slowed Pierce as he pulled away to win by four seconds and unofficially regain the points lead from six-time series champion Billy Moyer, who finished sixth.

“That was a lot of fun. This is probably one of my favorite Summernationals wins,” Pierce said, thanking his family and crew. “There was a lot of competition here tonight. The track was excellent. You could really go on the bottom or the top.”

“Erb, he’s one of the best on the bottom, and to pass him for the lead, and come up through that field … there was a lot of tough competition here tonight … a lot of good cars, so to win this race feels really good. The motor kind of had a little weird sound to it at the end, so I hope it’s all right.”

Erb, who got the jump on Shirley at the outset to take command, stayed in control on the low side through the first half of the race, avoiding a near collision with the slower car of Paul Stubber when Jay Sparks abruptly pulled off the track in turn one on lap 15.

Within a few laps, Pierce was sizing Erb up, blowing around him exiting turn two and pulling ahead on the backstretch.

The heavily watered surface, a few afternoon sprinkles and humid conditions allowed racing all over the track, meaning Erb’s low-groove choice was vulnerable.

“It was a little different here tonight. There was a little bit more moisture to start with, and they had a big cushion around the top tonight, so that gave them another lane up there,” Erb said. “We started up front and won our heat, to come home second tonight, I’m happy with that.”

The caution with 10 laps remaining didn’t give Erb much hope.

“(Pierce) was real good around the top,” Erb said. “Probably the only chance I had getting around him was if he pushed or something up over the cushion, but he was doing a real good job up around there — and there was no way I was going to get any higher to pass him.”

Feature notes: The feature started about 8:35 p.m. with the checkers falling about 8:50,  an early night that will benefit series regulars with lots of miles ahead in coming days and weeks. … Runner-up Dennis Erb Jr. was back in the Midwest after visiting Stuckey Enterprises in Shreveport, La., to pick up a new Black Diamond Chassis (he fielded an older car at Spoon River). … Matt Furman spun into the infield on the second lap but no caution flew and he returned to action. … Heat winner Shannon Babb of Moweaqua, Ill., held the third spot early but faded to finish 10th, the last car on the lead lap.

Driving a Rocket Chassis he recently traded for, Brian Shirley raced to victory in the final heat. It didn't come without a scare, though, as he got hung up on the high side between turns one and two on the fifth lap, allowing Bobby Pierce to briefly pull alongside. Shirley recovered, then pulled away to win while Pierce finished 1.418 seconds behind as the runner-up. Billy Moyer Jr. won a tight race for third over Ryan Unzicker while polesitter Jay Sparks, who got a poor start, held on for the final transfer spot.

Making a high-side charge early, Shannon Babb went around polesitter Chris Simpson on the second lap and edged away for a heat race victory. Babb drove hard into turn one to pull even with Simpson on the backstretch, then nipped him at the line on the second lap before drawing away. Simpson settled for second while Billy Moyer was a cose third. Brent Larson and Matt Furman — taking a spot from Tyler Bruening on the final lap — got the final two transfer spots; no cautions appeared.

New track record-holder Dennis Erb Jr. raced to a 10-lap victory from his pole position, edging away from a tight battle for second between Jason Feger and Rusty Schlenk in the early laps. Schlenk got the spot on the fourth lap and held on while Feger settled for third. Further back, Gordy Gundaker was fourth and Dustin Nobbe got the fifth and final transfer spot in the caution-free prelim.

Erb earned a heat race pole position and will go for his second series victory at Spoon River in as many years. Other heat race polesitters: Brian Shirley of Chatham, Ill., and Chris Simpson of Oxford, Iowa.

Three heat races will transfer five drivers apiece to the main event with three drivers from a consolation race transferring. The heat race winners will draw for the top three starting spots in the 40-lap feature.

Action is set to get under way at Spoon River Speedway as the high-banked 3/8-mile oval hosts the UMP DIRTcar Summernationals for the 22nd time.

The 10 drivers who have entered every miniseries event and several other regulars are set to tackle Spoon River after two off days among the last three, Monday’s scheduled day off and Wednesday’s break because of a rainout at Farley (Iowa) Speedway.

Billy Moyer of Batesville, Ark., will try to extend his points lead at a track where he’s won four series races, but none since 1999. Two-time and defending series champion Bobby Pierce of Oakwood, Ill., is his closest pursuer in the $25,000 title chase with four-time series champion Shannon Babb right in the mix.

A couple of brief rain showers hit the track in the mid-afternoon, but sun broke through within a half-hour later. Forecasts don’t call for rain until overnight. … Brian Shirley, after dropping off the WoO tour while losing sponsorship from Arnie Ranta, has unloaded a Rocket Chassis for his Bob Cullen Racing team. The Chatham, Ill., driver got the 7-race-old car in a trade with another former WoO driver, Donald Bradsher, for a Longhorn Chassis. “We’re looking forward to getting going in it,” Shirley said. … Australian invader Paul Stubber made a whirlwind trip to pick up a new Rocket Chassis after his primary car suffered significant damage in a Tuesday accident at Jacksonville (Ill.) Speedway. Stubber’s team met a representative from Shinnston, W.Va.-based Rocket in Columbus, Ohio, and swapped the wrecked car for his backup car which was ready to go. … Rusty Schlenk of McClure, Ohio, is ready for action after being rained out in five of the last six races he’s entered. ... Mark Voigt's engine lost oil pressure in hot laps and he scratched for the night; a crew member said the problem couldn't be easily diagnosed and they planned to return to his Marine, Ill., shop to make repairs.