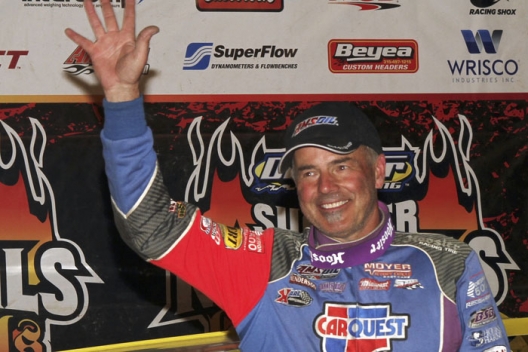 The Batesville, Ark., Hall of Famer’s car was pushing in the corners while first Shannon Babb and then Pierce challenged him, but Moyer pulled away after a restart with 10 laps remaining to win by 2.2 seconds for his first career victory at the quarter-mile fairgrounds oval.

“You just gotta do what you gotta do. … (The track) kind of reminded me of getting into the berm in those motocross days there, coming off (turn) four especially. Just kind of roll the right front up on there and the right rear against it and just off of there,” Moyer said. “It is fun, but it’s just right on the danger zone.”

Moyer, a six-time Summernationals champion who is considering his first full tour run in many years, solidified his series points lead with the $5,000 payday in beating Pierce, the two-time and reigning series champ from Oakwood, Ill.

Pierce, who rallied from his 18th starting spot in a backup car after being snakebitten in preliminaries, couldn’t maintain his rally after a lap-30 caution with his right-rear tire losing air.

Babb, of Moweaqua, Ill., ended up third with Billy Moyer Jr., the winner’s son, and polesitter Brent Larson of Lake Elmo, Minn., who led the first 10 laps, rounding out the top five.

Moyer took command with a lap-11 slide job in turn two, sliding in front of Larson with Babb following suit a half-lap later.

Moyer and Babb battled up front while Pierce rallied from his ninth-row starting spot and into third before the halfway point of the 30-lapper, a full straightaway behind the leading Moyer.

As the frontrunners battled traffic, suddenly the Moyer-Babb-Pierce train was nose-to-tail with a flurry of slower cars in front of them. Moyer made a couple of key moves to gets some breathing room, first diving between Dustin Nobbe and Scott Geaschel through turns three and four, then sliding between Bob Gardner and Mike Hammerle exiting turn four while Babb and Pierce slipped back while battling for second.

Pierce edged past Babb just before the race’s final slowed on lap 30 — the crowd roared with approval when the PA announcer revealed Pierce’s pass wouldn’t be reversed by the caution — and was right in Moyer’s tire tracks with 10 laps remaining.

But with Moyer turning up the wick, and Pierce battling a deflating tire, there was no late-race drama as the No. 21 edged away from the field.

“I knew (Pierce) came from way far back and that the track was to his liking for sure,” Moyer said. “I was just trying not to miss my marks there, and they said I had a little bit of room there at the end, I don’t know how close he was.”

Pierce, who had an electrical issue in time trials that forced him to a backup car, then had a flat tire in his heat race, felt fortunate to end the night on the podium.

“It was a heckuva night. Sometimes when bad luck strikes, it just keeps coming in full force,” Pierce said.

“I don’t know. It was a crazy night. Congrats to Billy on the win. I’m just glad that we came from like 18th back to second. I really wish this tire would’ve have went flat, though, because I really think I’d have had something for him.”

The feature was slowed four times, including for a red flag on the ninth lap when Blake Spencer’s car got upside down on the backstretch in the St. Augustine, Fla., driver’s first series feature. Emergency crews quickly attended to him and he climbed out unhurt.

The first yellow flew on the third lap with Jason Perry and Rick Salter tangling and spinning between turns one and two. A lap-seven caution appeared when Jason Feger’s engine flamed up as he slowed and rolled to the infield. He climbed out with no harm as crews extinguished the fire.

The final caution flew for on lap 30 for eighth-running Rob Mayea’s turn-three incident that ended with smoke wafting from under the hood.

While weather was pleasant most of the day, rain showers just north (before hot laps) and just south of the track (midway through the program) narrowly missed the track. ... A rainbow popped up behind the backstretch after the second near-miss. ... If Bobby Pierce is to win his third straight series race at Jacksonville, he'll have to do it from the 18th starting spot in a backup car. ... Series rookie Jose Parga of New Berlin, Ill., wasn't in action after getting a piece of metal in his eye that required surgical removal, fellow driver Kolby Vandenbergh said. ... Vandenbergh was missing his second series race with engine problems but hopes to return Thursday at Spoon River. ... Richard Frost scratched with engine problems and Australian driver Paul Stubber scratched with a wrecked car; Stubber plans to head to Rocket Chassis in Shinnston, W.Va., to get a backup car, but making it back from Wednesday's series race in Farley, Iowa, will be a challenge.

A heat-race front row featuring the two all-time winningest drivers ended with them finishing in order of their victory totals with Billy Moyer keeping Shannon Babb in check throughout the 10-lapper. Only four cars finished with Blake Spencer third and Don Hammer in fourth despite nearly climbing the backstretch wall in the final laps. Hammer spun to draw a lap-four caution, and three drivers — Daryn Klein, Bobby Pierce and Richard Frost — retired before the race returned the green. The third-running Daryn Klein and fourth-running Bobby Pierce had flat tires after contact, and Richard Frost lost power and pulled to the infield.

Polesitter Brent Larson cruised to a 10-lap heat victory, building a half-straightaway lead on runner-up Rob Mayea and running unchallenged the rest of the way. Mayea held onto second over Gordy Gundaker while Mark Voigt was fourth in the caution-free prelim. Rick Salter was further back in fifth.

Taking control when polesitter and fast qualifier Dustin Nobbe climbed the backstretch wall on the fourth lap, outside front-row starter Billy Moyer Jr. led the rest of the first 10-lap heat, holding off a late charge from Michael Kloos. Besides the Nobbe accident, a red flag appeared on the seventh lap when Aussie driver Paul Stubber's car slammed an infield tire barrier after a backstretch tangle with Jason Perry. Stubber climbed from the car apparently unhurt. Kloos took second from Ryan Unzicker on a lap-seven restart and briefly pulled alongside Moyer exiting turn two on the final lap before settling for second while Unzicker and Jason Feger finished in the third and fourth spots. Nobbe, the night's surprising fast qualifier, struggled to get the car off the wall at the end of the backstretch after leading the first three laps, but ended up pulling pitside on the lap-four caution.

Two-time and reigning tour champion Bobby Pierce of Oakwood, Ill., was third quickest in the third group, but his car had electrical issues that forced him to the infield after qualifying as smoke came from under the hood and the track emergency crew tended to his No. 32. Pierce's team unloaded a backup car, but it was unclear whether he'd be forced to drive it.

The sixth round of the UMP DIRTcar Summernationals rolls Tuesday at Jacksonville Speedway with Bobby Pierce of Oakwood, Ill., gunning for his third straight series victory at the quarter-mile oval.

Hot laps, time trials and heat races will precede a 40-lap feature for Super Late Models with a $5,000 winner’s purse on the line. A field of 22 cars entered including series newcomers Rob Mayea of Bend, Ore., and Blake Spencer of St. Augustine, Fla.