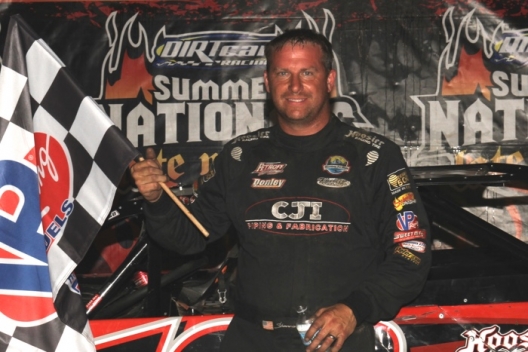 “Hell, that’s what you had to do to beat Billy Moyer,” Babb said. “He’s been fast and I just knew I had to beat him on the start.”

Babb, 43, of Moweaqua, Ill., did just that, vaulting off the outside pole in his XR1 Rocket to assume immediate command over the polesitter Hall of Famer from Batesville, Ark. The remainder of the distance then belonged to Babb, who survived a couple scary moments in lapped traffic but otherwise was never seriously challenge en route to his first Hell Tour victory of 2017 and a $5,000 payday.

The 59-year-old Moyer, who settled for a runner-up finish 1.047 seconds behind Babb, certainly took notice of his one-time understudy’s dogged pursuit of the checkered flag.

“He was on there tonight,” Moyer said of Babb. “The car looked good and he was driving it hard. I mean, he wanted that thing tonight. That’s what I told Billy (Moyer Jr.) when I come in (after the race) — he was acting like that thing paid a hundred grand or something. He was on it.

“But his car was good. When your car feels good, you can drive the heck out of it and do good. I was a little bit off so I was just kind of being conservative there. Shannon was definitely better than we were.”

Two-time and defending Summernationals champion Bobby Pierce of Oakwood, Ill., challenged Moyer repeatedly throughout the race but finished third, an improvement of one spot from where he started. Jason Feger of Bloomington, Ill., who won the last two Hell Tour events at Daugherty in 2015 and ’16, advanced from the 16th starting spot to finish fourth while sixth-starter Bob Gardner of East Peoria, Ill., was the last driver on the lead lap in fifth place.

Just eight of the 22 starters — including Australian Paul Stubber and Dustin Nobbe of Batesville, Ind., who finished one lap down in sixth and seventh, respectively, for career-best Summernationals performances — were running at the end of the feature, which was shortened to 30 laps from its scheduled 40-lap distance and made a show-up points event by UMP DIRTcar officials due to the 3/8-mile oval’s difficult track conditions. Drivers gathered at the UMP DIRTcar trailer in the pit area following three heat races that were run on an extremely dusty and rough surface — with the dust accentuated even more by the bright sun setting off turn one — to discuss the situation amongst themselves and with UMP DIRTcar director Sam Driggers.

There was nearly an hour’s delay in the racing program after the heat races so Daugherty’s track crew could rework the surface. The speedway’s condition was improved for the A-main, though it remained demanding and led several contenders, including Ryan Unzicker of El Paso, Ill., Billy Moyer Jr. of Batesville, Ark., and third-starter Mike Spatola of Manhattan, Ill., to park their cars early rather than subject them to the rigors of the full distance.

Babb participated in the post-heat discussions, but he found the surface to be more acceptable come feature time.

“The guy (Daugherty promoter Michael Daugherty) had a tough time getting the track going earlier,” Babb analyzed. “The dust was bad … when the sun was up, it was just killing him. Once the sun went down and he worked on it a little bit, he made it 90 percent better than what it was.”

Moyer related that it was “pretty miserable out there” even during the feature and that his back would likely be sore from the physical pounding he took while steering his Victory Race Car through the choppy corners, but he stuck it out to add a second-place finish to his pair of wins through the first four Summernationals events.

“We’re glad to get second I guess with all the conditions,” Moyer said.

Babb’s victory was the 91st of his career on the Summernationals, putting him four wins behind Moyer’s all-time series-leading total of 95. Babb acknowledged his former mentor by pulling alongside Moyer after the race and revving his motor at him.

“I’ll you what, we’ve had a lot of fun racing together,” said Babb, who won previously won a Summernationals event at Daugherty in 2006. “A lot of times we always joke and kid, we tell each other we’re gonna race ‘em title-for-title. Anyhow, for his age, and the rough tracks, that guy, he’s in damn good shape and does a helluva job.”

Pierce, 20, avoided pushing his Pierce Platinum car too hard so he could bring it home in one piece. He nosed underneath Moyer at least once — on lap 22 while working through lapped traffic — but, knowing that one more position wouldn’t earn him any additional points, opted not to force the issue.

“If we were (racing for full points,” Pierce said with a smile, “I might’ve thrown a little slider.”

Finding a way to overtake Moyer was just too difficult for Pierce.

“This track was really rough,” Pierce said. “Everyone knew it … that’s why a lot of cars pulled in. It wasn’t that bad on the top where we were. The bad thing is, that was really the only line that we could run, so anytime I’d get a run on (Moyer) I’d try to slide him in turn three but every time I got to the corner I was just so loose. He had that big momentum up there.

“I’m just happy we finished third. The car’s not torn up.”

Four caution flags slowed the feature. The first came on the original start when Eddie Martin of Lafayette, Ind., spun on the homestretch. Later cautions were needed on lap four for Mark Rose of Dorchester, Wis., spinning nose-first into the turn-four wall; lap six when Gordy Gundaker of St. Charles, Mo., slowed while running sixth due a dropped valve in his car’s engine; and lap 23 when Summernationals points leader Cody Mahoney of Hanover, Ind., slowed while holding sixth place with a broken driveshaft.

After the completion of the three Dirt Late Model heats run on a track surface that was rough and extremely dusty — with the dust accentuated even more by the bright sun setting off turn one — drivers gathered at the UMP DIRTcar trailer to discuss the conditions. The racers remarked that visibility was bad due to the dust, their cars were bouncing through the corners and rocks were an issue as well; Gordy Gundaker reported that his helmet shield was knocked open by a hit he absorbed while racing in his heat. ... A delay ensued as Daugherty’s track crew worked to recondition the track surface. At 9:45 p.m. — with the sun now set — the consolation was run with dust not as big of an issue as it had been in daylight. ... Due to the conditions and input from competitors, however, UMP DIRTcar director announced that the feature’s distance would be cut from 40 to 30 laps and all drivers would receive showup points. ... The feature was called to the staging area around 10 p.m.

Mike Spatola dominated the action, rolling to victory over Bob Gardner. Billy Moyer Jr. overtook Cody Mahoney to finish third. The lone caution flag flew on lap eight when Eddie Martin slid sideways in turn four while being lapped by Spatola, who just barely grazed the front end of Martin’s car with the right side of his machine. Steve Thorston, meanwhile, spun around in turn two and sat backwards with a wheel missing as the race was checkered. Kent Robinson was running second on lap two when he pulled to the infield.

Shannon Babb scored a flag-to-flag win, but Gordy Gundaker drew close enough to threaten the Summernationals veteran in the final laps before settling for second. Brent Larson finished third while Australian Paul Stubber placed fourth after slipping past Ryan Unzicker late in the distance. Jose Parga brought out a caution flag on lap three when he slapped the backstretch and came to a stop at the end of the straightaway.

Billy Moyer led all the way, keeping Bobby Pierce at bay over the final circuits to emerge victorious and move on to the heat-winners redraw. Dustin Nobbe, Jeff Riddell and Mike Staggs finished in positions 3-5 — the only other cars on the track at the finish. A red flag was briefly put out on lap six when Cody Fultz hit a tractor protecting a light pole on the inside of turn three; he was able to drive away from the scene despite damage to his car’s left side. Third-place Jason Feger pulled off the track during the pace laps after Fultz’s incident. Meanwhile, scheduled starters Chase Junghans, Brian Shirley and Mike Marlar scratched from the event, citing the evening’s rough, dusty track conditions for their decision.

Bobby Pierce of Oakwood, Ill., blazed around the 3/8-mile oval in 13.535 seconds during the first group to earn overall fast-time honors. He will start from the pole of the first heat.

Other heat polesitters will be group fast-timers Shannon Babb of Moweaqua, Ill., and Mike Spatola of Manhattan, Ill.

Thunderstorms crossed Daugherty Speedway and the surrounding area during the overnight hours and left some flooded farm fields and large puddles of water, but the racetrack took the deluge well and is ready for Sunday night’s action. Skies are now partly sunny and temperatures are in the low 80s with a stiff breeze, making for comfortable conditions. … UMP DIRTcar director Sam Driggers said a decision on Saturday night’s Summernationals feature at Peoria, which was stopped by rain just short of the halfway point (20 of 60 laps completed with Billy Moyer Jr. of Batesville, Ark., leading), will soon be announced by series and track officials. The race will not be completed on Monday’s Hell Tour off day, Driggers noted. … Three former Summernationals winners at Daugherty are in this evening’s field: Jason Feger of Bloomington, Ill. (2015 and ’16), Shannon Babb of Moweaqua, Ill. (’06) and Billy Moyer of Batesville, Ark., who won the track’s first-ever Hell Tour event in 1999. … Hot off a $12,000 Lucas Oil Late Model Dirt Series triumph Saturday night at Magnolia Motor Speedway in Columbus, Miss., Mike Marlar of Winfield, Tenn., is in the Daugherty pits ready for action. He made a 10-hour overnight haul to start a stretch of Summernationals competition. ... The Hell Tour's opening-week points battle sponsored by DirtonDirt.com concludes tonight; Cody Mahoney of Hanover, Ind., leaves Billy Moyer by four points in the chase for the $2,000 champion's prize.

After Saturday night’s 60-lap feature at Peoria (Ill.) Speedway was stopped by rain on lap 20, the UMP DIRTcar Summernationals moves on for Round 5 at Daugherty Speedway.

The 3/8-mile oval is hosting the Hell Tour for the third straight year and the 11th time in series history. Jason Feger of Bloomington, Ill., will shoot for his third straight Summernationals triumph at the Michael and Kim Daugherty-owned track after capturing the 2015 and ’16 events.

Hot laps are scheduled to begin at 6 p.m. EST.