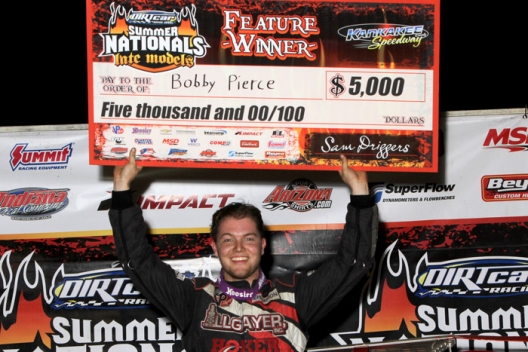 Rebounding from a ninth-place finish in the Hell Tour opener, the 20-year-old sensation from Oakwood, Ill., was dominant in Round 2 on Thursday night as he rolled to a flag-to-flag victory in the 40-lap feature at Kankakee County Speedway.

The $5,000 triumph marked the second year in a row that Pierce has captured Kankakee’s Summernationals event and was his 19th career win on the grueling circuit, which is scheduled to contest 29 races in 32 nights.

Pierce surged off the outside pole in his family’s Pierce Platinum car to grab the lead from polesitter Gordy Gundaker of St. Charles, Mo., at the initial green flag and never looked back. The two-time and defending Summernationals champion was never seriously challenged as he built as much as a full straightaway edge before crossing the finish line with a more modest margin of 0.768 of a second over Cody Mahoney of Hanover, Ind., who duplicated his runner-up finish in the previous night’s series opener at Brownstown (Ind.) Speedway.

Shannon Babb of Moweaqua, Ill., finished third after finally overtaking Gundaker for the spot on lap 38. Gundaker, who battled through the loss of power steering in his car just five laps into the race, settled for fourth place to register his career-best Summernationals performance and Ryan Unzicker of El Paso, Ill., advanced from the 11th starting spot to finish fifth.

Pierce conceded that the win was very satisfying after he was surprisingly not in the mix at the front of the field 24 hours earlier at Brownstown. Saddled with the 17th starting spot in the feature, he made headway to reach ninth place but couldn’t climb higher because the track surface went away.

“Last night, I think, I just wasn’t on my game in qualifying and we weren’t quite prepared for the track slicking off that quick,” Pierce said of his Brownstown effort. “We qualified bad, had a tough heat … eventually we got to the front in the feature, but it rubbered up (to stop his advance).

“It feels so great,” he continued. “Heck, last year we knocked off the first one (his 2016 win at Kankakee came in the Hell Tour opener), and this time it took us till the second race. Maybe we’ll just keep carrying this momentum. Every year I just want to win as much of these as possible. All these tracks are so close to home and they fit my driving style most of the time. I just really love coming to all these little tracks, up on the wheel … it’s a lot of fun.”

Pierce’s road to the top Kankakee prize wasn’t as easy as it might have looked, though. He had to figure out the tricky layout of the third-mile oval and survive several scares — some of his own making, some a result of dealing with heavy lapped traffic.

“Both of these corners are different,” Pierce said of Kankakee. “You got one and two, it’s always kind of slick and smooth, and three and four, it normally has a curb up there. The bottom was really good all the way around honestly — (in) three and four, the bottom was the best I’ve seen it in I-don’t-know-how-long.

“Gordy was really pressuring me there in the beginning and I was wondering if I should’ve moved down. But then I just got that momentum going on top and I almost fell off one and two, hit the curb in three and four, jumped the cushion. I didn’t want to break the j-bar out of it, so I started taking it a little easier and actually got faster when I did that.

“Then I got in that lapped traffic,” he added. “I told them down in victory lane, I was like, ‘That’s a part of Summernationals. That’s the Hell Tour right there.’ You’ve got to deal with that stuff. There was tires on the racetrack, in the middle of the track — an actual tire (a inside marker tire was shoved up off the infield in turn two at one point). It was crazy.”

The ninth-starting Mahoney, 30, slid past Gundaker for second on lap 16 and appeared to be a possible threat to Pierce, but the former Don O’Neal crew chief wasn’t able to get close enough to make a bid for his first-ever Summernationals triumph. He felt he had a winning Bowman Motorsports machine under him, though.

“Man, I really did,” said Mahoney, whose back-to-back second-place finishes gave him the overall Summernationals points lead and the top spot in the DirtonDirt.com-sponsored opening week points battle. “I just got held up there by some lapped traffic, and then once I got clear then I was wanting more lapped traffic to back (Pierce) back up. I think on open racetrack we were better than he was, and man, if I had a shot to win one, that was gonna be one.

“But it feels good to finally get to race with these guys two nights in a row and run that competitive with them. Hat’s off to those guys down there at Stuckey Enterprises and Black Dimaond for building such a good race car. It’s definitely turned our program around a little bit.”

The 43-year-old Babb threw caution to the wind to make a late-race rally and claim a third-place finish in his XR1 Rocket.

“We gambled and went soft on tires,” said Babb, who started sixth but lost several positions in the race’s early laps. “I drove around the track and it looked like it was wet as can be … they had four inches of rain (in the previous days). But this place was hard and it blew off quick. When we rolled around there on that parade lap it just dried it up.

“They threw the green and I seen (third-starter) Billy (Moyer) drop and I dropped (due to soft tires) … I was like, I gotta make something happen. I looked at my guys under the cautions and I wanted to head in and get a (harder) 30 (compound tire), but it’s a long ways from the tail and it’s a short race. The longer we ran … I can’t say it got any better, but everybody else got slower — that bottom slowed down — and I was able to go up and pick up some positions.”

Three caution flags slowed the race. The most significant incident came on lap two when Mike Spatola of Manhattan, Ill., Brent Larson of Lake Elmo, Minn., Kolby Vandenbergh of Ashland, Ill., and Adam Bowman of Seymour, Ind., tangled between turns one and two. Other cautions were put out on lap six when Jose Parga of New Berlin, Ill., slowed and lap 10 when Spatola slowed through turns one and two.

Gordy Gundaker was all smiles after pulling off a white-flag pass of Kevin Weaver to capture the second heat — and then his spirits rose even higher when he picked the pole position for the 40-lap feature. “I was stuck so hard (on the bottom),” the second-year Summernationals traveler said. “I felt really good.” … Gundaker will share the front row with Bobby Pierce, who will chase victory in Kankakee’s Hell Tour event for the second straight year. … After failing to qualify for Brownstown’s Summernationals opener, Chase Junghans starts fourth at Kankakee. He knows he has an uphill climb, however. “We’re gonna have to be a little better to beat that 32 car (Pierce),” he said. … Mike Spatola’s heat-race trouble while running second was a blown right-rear tire that thoroughly tore up his car’s bodywork. He came back to finish second in the consolation and move on to the A-main. … Provisional starters for the feature are Dustin Nobbe, Jay Morris, Jose Parga and Steve Thorsten.

Bobby Pierce dominated the action, leading all the way as he beat Shannon Babb to the finish line by 1.185 seconds. Cody Mahoney was a solid third while Jason Feger overtook Brent Larson on the final circuit to place fourth. Mike Spatola brought out the race’s lone caution flag when he slowed on lap six while running in second place.

Gordy Gundaker slid past Kevin Weaver for the lead coming to the white flag, giving him a victory in the prelim. Billy Moyer Jr. finished third while polesitter Ryan Unzicker slipped to fourth in the caution-free event.

Billy Moyer controlled the action from start-to-finish, beating Chase Junghans to the checkered flag by 2.102 seconds. A caution flag flew on lap four for Adam Bowman, who smacked the homestretch wall and was towed to the pit area.

Billy Moyer of Batesville, Ark., turned the overall fastest lap in the 29-car group qualifying session, circlling the third-mile track in 13.813 seconds to earn the pole position for the first heat.

Jay Morris of Watseka, Ill., slid off the track in turns one and two during his second qualifying lap when his car's right-rear brake rotor broke. His car hit a concrete and was towed to the pit area with significant right-front damage.

Some spots of mud remain in Kankakee’s pit area from recent heavy rains, but the skies are sunny and the temperature has reached 90 on the second night of the Hell Tour. … Jason Feger of Bloomington, Ill., will drive the Longhorn Race Car he debuted in Wednesday night’s Summernationals opener at Brownstown. The machine — the same chassis that Tim McCreadie of Watertown, N.Y., drove to a fourth-place finish in last Saturday night’s Dream at Eldora Speedway in Rossburg, Ohio — was purchased from Longhorn at Eldora by Feger’s teammate Tim Lance Jr. and Feger traveled directly to Longhorn’s shop following the Dream to pick it up. … Kevin Weaver of Gibson City, Ill., will make his ’17 Summernationals debut in his Black Market chassis, a mount built by Dane Tilstra of Onarga, Ill., in which Weaver has made the majority of his starts this season. … Former Kankakee Summernationals winner Mike Spatola of Manhattan, Ill., is making his first visit to the third-mile oval since last year’s Hell Tour event. He enters the action with momentum; he has two wins and two runner-up finishes in his last four starts with his Billy Moyer Victory Race Car. … Frank Heckenast Jr. of Frankfort, Ill., was behind the wheel of his cousin Spatola's second car for the night because his own team was ready to leave Friday for World of Outlaws action in Canada. ... Rick Eshelman, who has announced all the Summernationals events for the past two years, can’t make it three Hell Tours in a row due to his commitments as the World of Outlaws Craftsman Late Model Series announcer in 2017. But he’s still planning to call 14 Summernationals shows between his WoO races, including tonight’s Kankakee program. Eric Huenefeld of Freeport, Ill., will announce the next seven events with Eshelman tending to his WoO duties, while ’16 WoO announcer Matt Prieur will man the microphone for the circuit’s concluding swing next month through Michigan and Ohio.

Billy Moyer of Batesville, Ark., has won nearly one-third of the Summernationals races at Kankakee, claiming a record eight victories at the track. The 59-year-old, who is in tonight’s field after capturing Wednesday night’s Summernationals opener at Brownstown (Ind.) Speedway, scored his first Hell Tour triumph at the 3/8-mile oval in 1987 and his most recent came in 2014.

Other past Summernationals winners at Kankakee who are on hand tonight are last year’s victor Bobby Pierce of Oakwood, Ill., Shannon Babb of Moweaqua, Ill., Mike Spatola of Manhattan, Ill., and Frank Heckenast Jr. of Frankfort, who recorded his first-ever Summernationals triumph in the 2015 event.

The evening’s drivers’ meeting is scheduled to begin at 6 p.m. with hot laps to follow. Group qualifying will be utilized to set the heat-race lineups.