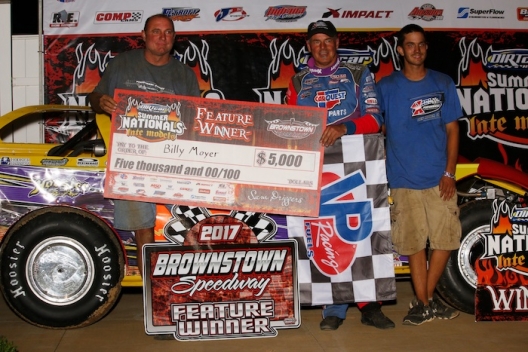 BROWNSTOWN, Ind. (June 14) — It was more than two decades ago that Billy Moyer of Batesville, Ark., scored his first career Hoosier Dirt Classic victory in the 1985 edition of Brownstown Speedway’s annual event. Years later, the Hall of Famer continues to pile up victories, notching his 94th career UMP DIRTcar Summernationals triumph in Wednesday’s tour opener at the quarter-mile oval.

Slipping under polesitter Jackie Boggs of Grayson, Ky., in turns one and two on lap 37 of 40, the second-starting Moyer led the rest of the way to earn a $5,000 payday in his third victory of the 2017 season.

“We come off such a dismal run,” Moyer said after the race. “I guess we ran 12th (at Eldora) last weekend. It’s not anything like we wanted to do. We went back to the drawing board, changed some stuff this last week and that Victory Race Car is digging. I’m real happy with some stuff we’re doing.”

Redrawing to start on the pole of Wednesday’s 40-lap feature, Boggs shot to an early lead, with the frontrunners approaching the tail of the field by lap 15. Using the lapped traffic to his advantage, Moyer briefly pulled ahead of Boggs on lap 17, just as the race’s lone yellow flag waved.

Boggs held his lead on the restart, but was unable to hold off Moyer in the final laps. Slipping up the track ever-so-slightly, Moyer was able to pull ahead of Boggs in turns one and two on lap 37, leading the final four circuits for his 819th career victory.

“The sea parted there for me,” Moyer said. “Our cars were pretty darn equal. (Boggs) had different tires on than I had and he was good in the short run. Right before that first yellow come out, when we got to lapped traffic, it didn’t seem he was maneuverable at all and I kind of thought, ‘I’ve got him where I need him.’

“I don’t know what happened there. Parts of it was rubbered-up, but it wasn’t asphalt-type of rubbered up. I tried a bunch of different games. I would ride a while, charge it a while. Then finally I started to tear the right-rear tire off of it and it seemed like I got a little better. Then come the push through the middle. I didn’t know who it was behind me for sure, but I could hear them at times. It all worked out good.”

Debuting a new car, Cody Mahoney of Madison, Ind., finished runner-up, with Jason Jameson of Lawrenceburg, Ind., rounding out the podium in third. Boggs slipped back to run fourth at the checkers, with Steve Casebolt of Richmond, Ind., notching a top-five finish.

“The race car was real good,” Mahoney said. “That was our first night out with it. We didn’t arrive until 6:30. We’ve been busting butt, waiting on parts and stuff. I’ve got to thank everybody at Stuckey Enterprises and Black Diamond for getting that thing done and building a really good race car. We’ll keep working on that. I feel like we’ve got something to work on to get a lot better with.”

After nearly slipping over the berm in turns three and four early in the race, Jameson was happy to bring home a third-place finish.

“It was just a train race and the rubber just kept moving down,” Jameson said. “I was just following them. I screwed up there early and almost cost myself a lot more spots than I did. But I’ll take it after last weekend."

Notes: Moyer captured his third victory of the 2017 season and his 94th career Summernationals victory. The Hall of Famer is a four-time winner of the Hoosier Dirt Classic. … The race was slowed by a single caution when Jeremy Hines spun in turn four on lap 17. … The tour boasts its richest points fund ever. In addition to $25,000 to the champion (out of a $55,000 postseries points fund), $5,000 will be distributed about the top 10 drivers each week of the tour. … Summernationals competitors travel to Kankakee Speedway on Thursday for another $5,000-to-win event.

Shannon Babb of Moweaqua, Ill., was forced to go to a backup car after losing an engine on the final lap of his heat race. He is among Wednesday’s four provisionals for the 40-lap feature based on last year’s UMP nationals points standings. … Other provisionals went to Bob Gardner of East Peoria, Ill. and Kolby Vandenbergh of Ashland, Ill. (based on last year’s Summernationals standings), as well as Matt Bex of Avoca, Ind. (Brownstown track provisional).

Working around the inside of the racetrack, third-starting Devin Gilpin shot to an early lead. Outside polesitter Bobby Pierce slipped ahead of Gilpin to take the lead on the third lap, as Kolby Vandenbergh fought off Bob Gardner and Scott James for the third-place spot. A yellow flag waved on lap five when Jose Parga spun exiting turn two. Scott James slowed to draw a caution on lap nine. Another yellow flag waved on lap 11 for Brian Mullins. Pierce led the final lap to win the consolation, with Gilpin holding off Gardner to take the second and final transfer spot.

Charging to the front of the field at the drop of the green flag, polesitter Jackie Boggs to an early lead, as Billy Moyer Jr. advanced to run second. Pulling away at the halfway mark, Boggs dominated all 10 laps. Moyer Jr. finished runner-up, with fifth-starting Brent Larson finishing third. Jared Bailey improved from the sixth starting spot to run fourth and transfer to the feature.

Polesitter Cody Mahoney lead the opening lap, with fourth-startingJeremy Hines working around the top side to run in second. Mahoney held is lead at the halfway mark, with Gordy Gundaker and Kent Robinson in a tight battle for third. Mahoney won the third heat, with Hines finishing runner-up. Gundaker outdueled Robinson to run third, with Robinson taking the fourth and final transfer spot.

Advancing from the second row, Billy Moyer shot to an early lead, as a three-car battle ensued for the runner-up spot between Steve Casebolt, Jason Feger and Tanner English. A yellow flag flew on lap three when Nathan Vawter spun in turn four. Moyer held his lead on the restart, as second-running Casebolt fought back challenges from English. Moyer won the heat race, with Casebolt and English rounding out the podium. Feger finished fourth to transfer to the feature.

Polesitter Jason Jameson jumped to the lead on the first lap, with fourth-starting Shannon Babb charging around the high side in turns one and two to move in to the second-place spot. Jameson and Babb raced side-by-side at the halfway mark, with a smoking Babb pulling off on the ninth lap. Jameson won the heat race, with Ryan Unzicker, Chad Stapleton and Rodney Melvin transferring to the feature.

With 32 entries, the car count is up three from the 2015 Summernationals opener at Brownstown. … Summernationals veterans Billy Moyer of Batesville, Ark., and Shannon Babb of Mowequa, Ill., are both former winners of Brownstown’s Hoosier Dirt Classic. The first of Moyer’s victories came back in 1985, while Babb’s first came in 1998. … Other Summernationals veterans in the pit area at Brownstown include defending series champion Bobby Pierce of Oakwood, Ill., Ryan Unzicker of El Paso, Ill., and Jason Feger of Bloomington, Ill. ... Devin Gilpin of Columbus, Ind., is the most recent winner in Brownstown’s weekly Late Model action, while Steve Casebolt of Richmond, Ind., and Tanner English of Benton, Ky., each have special event victories at the racetrack this season. … Jared Bailey of Bedford, Ind., is the current Brownstown weekly points leader. … Among drivers planning their first-ever run on the Summernationals tour is second-generation driver Dustin Nobbe of Batesville, Ind. … Jackie Boggs of Grayson, Ky., is making only his second-ever appearance at Brownstown. … Rodney Melvin of Benton, Ill., is back in action for the Summernationals opener. His last Hell Tour victory came back in 2012 at Highland (Ill.) Speedway. … There are also 24 UMP modifieds on hand.

The UMP DIRTcar Summernationals is set to kick off its 32nd year of action on Wednesday at Brownstown (Ind.) Speedway. The tour’s 2017 schedule boasts 29 races in 32 days.

Summernationals competitors return to Brownstown after last year’s series stop at the 1/4-mile Indiana oval was rained out. Dennis Erb Jr. of Carpentersville, Ill., was the winner of the 2015 and 2013 tour events at Brownstown, but he is not scheduled to be on hand for Wednesday’s Hoosier Dirt Classic. Other recent Hell Tour winners at Brownstown include Billy Moyer Jr. (2012), Shannon Babb (’11) and Billy Moyer (’10).

Wednesday’s program will include time trials, heat races, consolations, and the $5,000-to-win main event. UMP modifieds and super stocks will also be in action. Hot laps are slated for 6:30 p.m. Eastern.