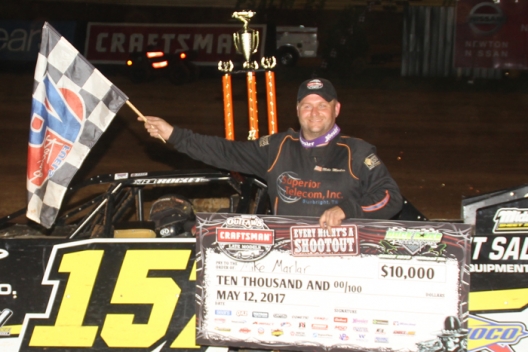 WHEEL, Tenn. (May 14) — Mike Marlar had no choice but to be patient — both as he tried to wrestle the lead away from Brandon Sheppard, and as he tried to protect his own lead as the two raced toward the checkered flag in the waning stages of Sunday’s 50-lap World of Outlaws-sanctioned race at Duck River Raceway Park.

“Then he pulled back out on me. I thought, if I do this, here’s how I gotta do it. So I started moving around and taking different lines and I was able to get by him.”

Once in the lead, Marlar appeared as though he’d drive away and hide. Behind Sheppard, 2011 series champion Rick Eckert of York, Pa., finished third, some 1.819 seconds back. Brandon Overton of Evans, Ga., was fourth, while Steve Francis of Bowling Green, Ky., finished a distant fifth, though it was his best World of Outlaws finish in four series starts this season.

Starting from the pole, Sheppard beat fellow front-row starter Devin Moran of Dresden, Ohio, into turn one on the opening lap and managed to build comfortable leads despite a series of early cautions. First Moran gave chase, and finally, after Moran went pitside with a flat tire on lap 23, Marlar picked up the trail. Marlar pulled even with Sheppard on the restart, but couldn’t make his pass attempt stick. It wasn’t until 10 laps later that he finally wrangled the top spot.

“I should have known it was time to start moving around,” said Sheppard. “I felt the middle start giving up on me. My crew was telling me that I had a pretty decent lead there for a little while. Then after that restart, I messed up getting into (turn) one and he just took advantage of it and he did a good job. Overall, I’m pretty happy.

Only slower cars impeded Marlar’s progress. He pulled away from Sheppard and wasn’t threatened again until he ran upon the back markers with just a handful of laps remaining. That’s when he had to exercise a little more patience.

“The whole track was blocked and it was definitely concerning,” said Marlar. “But I just thought, I just gotta plug … even when I can’t get by ‘em … I just gotta plug the hole so nobody else can. So I just tried to pick the fastest car that I was behind there and hoped that he could get an edge on the guy beside him. I was getting through them, but I was definitely having to be real meticulous about doing it.”

Marlar seemed to be on cruise until catching a gaggle of cars with two laps to go. He had no choice but to wade into the middle of them, even as they diced for position at the back of the field.

“I knew (Sheppard) had to be all over me and I just had to stay in the lane that was moving the best,” said Marlar. “So I was just able to do that and I was able to get to the outside of Eric (Wells) and just kinda plug the hole more or less. Really I just had to kinda ride it out that last lap or two and hopefully nobody else moved so (Sheppard) couldn’t go anywhere.

“I think there was a lot of impatience going on there and I honestly just tried to get behind the most impatient guy and thought he might make a hole for me and it worked out. The guy I was behind got a little more aggressive there and I was able to get further up in the hole.”

Notes: Mike Marlar's previous World of Outlaws win came at Tazewell (Tenn.) Speedway on April 12, 2014. ... Nineteen of the 20 starters were running at the finish, with 14 still on the lead lap and the remaining five scored just one lap down. ... The race was slowed by four cautions. ... Brian Shirley of Chatham, Ill., rallied from 20th to seventh after bringing out the first caution on lap five. Shirley hooked the cushion in turn one and jumped the wall. With the back of his car stuck on top of the wall, he rode it through turn two, where he finally got back on all fours at the exit of the track where the wall ends. ... The 20 drivers represented 10 states. ... Devin Moran of Dresden, Ohio, jumped the start of the third heat race and was docked one row. After a second restart, he chased Frank Heckenast Jr. of Frankfort, Ill., for six laps before finally getting by and into the redraw position. ... Morgan Bagley of Tyler, Texas, broke a rocker arm during hot laps, but made repairs in time for his heat race. ... With his sixth-place finish, Tyler Erb of New Waverly, Texas, was able to leap Chris Madden of Gray Court, S.C., and move into second in the WoO points standings. Erb entered Duck River trailing Madden in the points race by just two points, while he finished five spots in front of Madden on the track.  ... The race was originally scheduled for Friday night, but reset for Sunday due to wet weather in the area. ... The WoO feature was finished before 9:30 p.m.