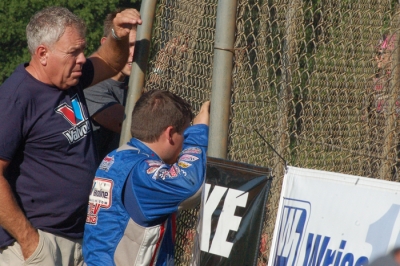 WHEEL, Tenn. (May 14) – After Sunday’s heat races were in the books and the redraw for driver’s starting spots for the first three rows were complete at Duck River Raceway Park, track officials made an impromptu decision to rework the surface of the quarter-mile oval. | RaceWire

The 14 drivers in the speedway’s Crate Late Model division had already been called to staging, creating a logjam of cars and drivers alike at the entrance to the track. The longer the process took — about 25 minutes total — the more the grumbling rippled through the crowd of curious onlookers.

The result was a racy surface unlike the sunbaked track that drivers competed on during preliminary action earlier in the day. By night’s end, the grumbling — which had come primarily from drivers in support divisions — had subsided and competitors had high praise for the track that provided two- and three-wide action throughout the 50-lap World of Outlaws main event.

“They made it better really. They did,” said World of Outlaws winner Mike Marlar of Winfield, Tenn. “It was kinda crumbly in the heats and it was a little bit harder to pass. When they went out there and tilled it up and put a little water on it, it just kinda packed the whole track down tight and there really wasn’t no preferred line.

“There was a lot of different lanes you could run on in the feature, so I really think they helped it a bunch. It was real racy after they worked on it, so they must know what they’re doing.”

Marlar, who has had a fair measure of success at Duck River, attributed his win to his ability to move around on the track and find a better way around race leader and polesitter Brandon Sheppard of New Berlin, Ill. Ironically, Marlar attributed part of his success to the lessons he learned while racing in Sheppard’s home state a few days earlier.

“This is just a racy racetrack. I have won a few here, but not always the same way,” Marlar said. “You’ve got a little different approach every time you race here. It’s got a little bit of character to it. You know, I went up there last night and run some of them Midwestern races — well, over the weekend we run some of them Midwestern races (in Illinois) — and that stuff will toughen you up a little bit on really moving around. So I moved around a little bit more and that was definitely helpful.”

Sheppard, who was making his first-ever visit to Duck River, led 34 laps before giving way to Marlar. Even in defeat, he was equally complimentary on the racing surface.

“The track is super fun to race on,” said Sheppard. “Maybe if I had a little more experience, I would’ve known to move around a little bit there. But congrats to Mikey and good job to Rick. I had a lot of fun and I’m looking forward to coming back next year.”

Long after the lights had been dimmed and most of the haulers had been loaded up at Duck River Raceway Park on Sunday night, Mike Marlar slipped relatively unnoticed through the speedway’s grandstand paddock area. Already cleaned up and changed back into his street clothes, the Winfield, Tenn., driver clutched his newly-won trophy, the just-acquired hardware he’d been given for winning his second-ever World of Outlaws main event.

In the parking lot, Marlar stopped to talk to David Earl Gentry, the local racer who grew up just a few miles from Duck River, cutting his teeth at the quarter-mile bullring before eventually going on to win the 2006 Southern Regional Racing Series title, as well as a pair of NeSmith Chevrolet Dirt Late Model Series championships.

On Tuesday, Gentry will bury his father, 72-year-old David Earl Gentry, Sr., who passed away Friday from injuries suffered in an automobile accident last week. Marlar sought out Gentry to offer his condolences. Without fanfare, Marlar also offered Gentry his World of Outlaws trophy, both as a token of sympathy and a symbol of support.

“I know he’s got a lot of trophies, but I just wanted him to know that us racers, we really do care a lot about each other. I just wanted to let him know that he had some racers thinking about him. That’s all I could do. It wasn’t much, but at least he knows when he looks up there (at that trophy) that he’s got some racers that’ll stick behind him if he ever needs something.”

In 12 series races this season, non-World of Outlaws regulars — drivers not inside the top 13 in points — have just three victories. However, two of those three wins by non-WoO regulars happened this weekend, making WoO regulars 0-for-2 in Tennessee.

Mike Marlar of Winfield, Tenn., earned a victory at Duck River Raceway Park in Wheel, Tenn., on Sunday evening, while Brandon Overton of Evans, Ga., kicked off the weekend with a win at Smoky Mountain Speedway near Maryville, Tenn., on Saturday. While Overton is a native Georgian, his affiliation with the Crossville, Tenn.-based Dream Team, owned by Chip Stone and headed by Crossville’s Randy Weaver, makes Tennessee teams perfect in defending their home turf against World of Outlaws invaders this season.

Going back through the 2014 season, Tennesseans (or Tennessee-based teams in Overton’s case) have won six of the eight World of Outlaws races contested in the Volunteer State.

In 2014, Marlar won his first-ever WoO feature on April 12 at Tazewell Speedway. That same season, Darrell Lanigan of Union, Ky., won at Duck River. In 2015, Billy Ogle Jr. of Knoxville, Tenn., won at Tazewell, while Scott Bloomquist of Mooresburg, Tenn., won at Smoky Mountain. In 2016, Dale McDowell of Chickamauga, Ga., (just barely over the state line near Chattanooga) captured the WoO main event at Duck River and Bloomquist went to victory lane again at Smoky Mountain.

The tour returns for its last Tennessee stop of ’17 on June 2 at Tazewell Speedway.

Both World of Outlaws winners over the weekend had something in common. Each collected their second-series victory. Brandon Overton of Evans, Ga., who won Saturday at Smoky Mountain Speedway in Maryville, Tenn., first won at Lernerville Speedway in Sarver, Pa., on June 25, 2016. Mike Marlar of Winfield, Tenn., who won at Duck River Raceway Park in Wheel, Tenn., on Sunday, picked up his first-ever WoO win at Tazewell (Tenn.) Speedway on April 12, 2014. “I love racing with the World of Outlaws. I don’t get to do it a lot, but when they come to Tennessee or sometimes I venture out and go racing with the World of Outlaws. They're an awesome group of guys to race with and just awesome officiating, just the whole deal. Craftsman really got behind that deal big, so it’s fun to go race at the top level like this. … The 20 entrants at Duck River were the fewest for the series this season. The May 6 race at Fayetteville (N.C.) Motor Speedway 21 cars. Only three DRRP regulars, Eric Hickerson, David Seibers and Brad Skinner, attempted to qualify for the program. Seibers of Chapel Hill, Tenn., is the only one of the three who races primarily at Duck River, as both Hickerson and Skinner follow follow the Southern All Star series.