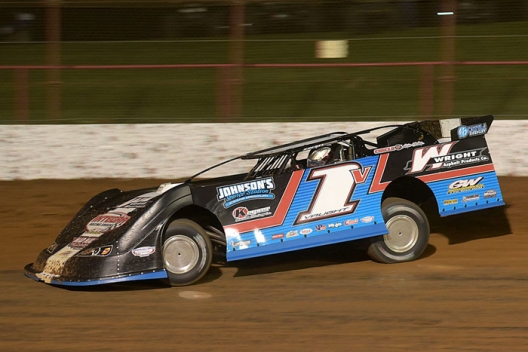 Todd Boyd/photosbyboyd.smugmug.com
Will Vaught heads for a $2,000 victory at Lucas Oil Speedway.
What won the race: Will Vaught of Crane, Mo., used a restart with five laps to go to get around race leader Tony Jackson Jr. of Lebanon, Mo., when Jackson jumped the cushion getting into turn one. The third-starting Vaught then led the rest of the way for a $2,000 victory in the Lucas Oil Midwest LateModel Racing Association season opener, finishing the event 0.867 seconds ahead of runner-up Terry Phillips of Springfield, Mo.
Quotable: "We'll have to improve (Saturday) because Tony probably had the best car," Vaught said. "But he was in the wrong place at the wrong time and we compensated."
Key notes: After an I-80 rainout last weekend, the event opened up the season for the MLRA series. ... The feature was slowed by one caution flag on lap 20. ... Payton Looney led at the drop of the green but lost the spot to Jackson on lap five. ... Looney was running third on the last restart but slipped up the track and got shuffled back to eighth. ... Series action continues Saturday at Lucas Oil Speedway with a $3,000 top prize on the line.
On the move: Phillips started 12th and finished second.
Winner's sponsors: Vaught's Rocket Chassis is sponsored by Johnson's Service Station, Wright Asphalt Products, Keyser Manufacturing, Integra Racing Shocks and GW Performance.
Points chase: Jesse Stovall of Galena, Mo., is the defending series champion. Stovall won the 2016 title by 118 points over Terry Phillips.
Car count: 41
Heat race winners: Will Vaught, Rodney Sanders, Cole Wells, Payton Looney
Consolation race winners: Chase Junghans, Randy Timms
Next series race: May 4, Lee County Speedway (Donnellson, IA) $3,000
Editor's note: Results and race details are unofficial.