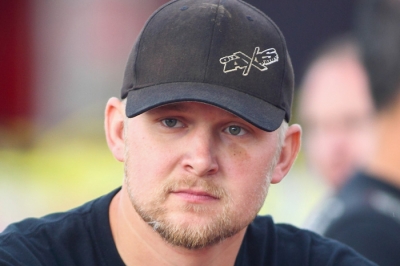 Will Vaught plans to increase his racing schedule this season after entering only about 15 Late Model dirt events in 2016. First up is this weekend's fourth annual Lucas Oil Midwest LateModel Racing Association Spring Nationals presented by RacingJunk.com.

But don't expect Vaught to return to his days of high-volume competition anytime soon.

"I don't really have a schedule," the 30-year-old from Crane said. "It all figures around what the kids are doing. But yeah, we are going to race more than we did last year. We didn't even race for the first time last year until July."

Rust probably won't be a concern when Vaught pulls his Rocket Chassis onto the Lucas Oil Speedway dirt Friday and Saturday for the season-opening MLRA programs. He was highly competitive in his few events a year ago, including a first-ever win at Wheatland in MLRA's Larry Phillips Memorial over Labor Day weekend.

It's just that his own racing is not at the top of the priority list these days. Along with overseeing two businesses — Circle V Auto Sales and Johnson's Service Station in his hometown — Vaught and wife Ashtin have two busy youngsters.

Not only are son Maddox (7) and daughter Mallory (5) involved in youth basketball and for Mallory cheerleading competitions, the kids have budding racing careers of their own.

Both are in quarter-midgets, winning their respective events last weekend at the inaugural Southwest Missouri Quarter Midget Association event on the Lucas Oil Speedway Slick Track behind the main grandstands. They also have racing events this year planned in Tulsa and Granite City, Illinois, along with more Ozarks-area stops in Wheatland.

"They did good and had fun," Vaught said of the youngsters' first races at Lucas Oil Speedway. "But yeah, we're running around and busy all the time."

Vaught wouldn't trade it for anything.

Even more so when he find the time, like this weekend, to climb behind the wheel of his own race car. Propped by sponsors Wright Asphalt Products out of Texas along with Midwest Sheet Metal, DW Performance and Integra Shocks, Vaught remains fast.

"It's a little harder to keep up with technology, but I have good people who are helping me," Vaught said of the challenges presented by racing less. "By not racing all the time, we keep it more baseline and don't get out there in right field as much. That maybe keeps us more consistent, I guess.

"We really should have won three $5,000 or more races last year. At Salina (Oklahoma) we led every lap until the last two, when we blew a tire, against a lot of the big guns," Vaught said. "Our average last year was very good. We kind of jumped back in and were very competitive.

"Hopefully this year, we can do the same. For me, we'll race around the kids' schedule and try to have some fun.”

Notes: Friday’s MLRA feature winner will collect $2,000 with Saturday's winner earning $3,000, plus $500 in bonus money in memory of Ron Jenkins, the original builder of Wheatland Raceway. … USRA modifieds and street stocks are also in action with former NASCAR driver Ken Schrader competing in the modified division. … Gates open at 5 p.m. both nights with hot laps at 7 and racing at 7:35. … For more information, visit lucasoilspeedway.com.