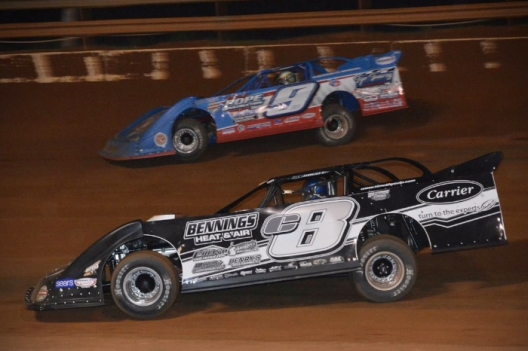 After continuing a dramatic turnaround of his 2017 season with his first-ever World of Outlaws Craftsman Late Model Series triumph in the 3/8-mile oval’s 40-lap feature, the 27-year-old driver from Prattsville, Ark., struggled to put the biggest win of his career in perspective.

“ ‘Wow!’ is all I can say,” Culp said during an emotional victory lane ceremony after becoming the sixth different winner in as many WoO events this season. “I can’t even believe it … I just can’t believe I won a World of Outlaws race. That’s amazing.”

Just over one week removed from an unsanctioned Pelican 50 win at Ark-La-Tex Speedway in Vivian, La., in his first start in an XR1 Rocket car following the dissolution of his involvement with the GRT house car program, Culp showed his newfound strength on an even bigger stage. He overtook race-long pacesetter Devin Moran of Dresden, Ohio, for the lead on lap 26 and controlled the remainder of the distance to pocket the A-main’s $8,000 top prize.

WoO points leader Brandon Sheppard of New Berlin, Ill., who outdueled Culp to capture Friday night’s 50-lap WoO event at Whynot, finished third after starting from the outside pole. He lost second place to Culp on a lap-six restart and kept Mark Richards’s Rocket house car in the show position the rest of the way.

WoO regular Morgan Bagley of Tyler, Texas, appeared headed toward a top-five finish at his home track — a speedway that his father, Ronnie, co-owned during Morgan’s adolescence — until a deflating left-rear tire finally went flat on the final lap, dropping him from fourth place to a dismal finish of 19th.

Culp had no such problems during his march to a victory that left his frustrating Georgia-Florida Speedweeks performance — just one feature start in seven tries — a distant memory.

“Man, to be able to run with these guys is amazing, let alone win,” said Culp, who used Clements power in a machine that’s fielded by his father-in-law Mark Bennings. “It exceeded all my expectations. I just can’t wait to get to the next track now.

“Since we unloaded (the car) brand-new out of the box, it’s been a Rocket — it’s living up to its name. I can’t thank all them guys at Rocket enough. They’ve helped me a ton.”

Culp, who started third, chased the polesitting Moran until shortly after the race’s halfway mark. The Louisiana native drove by Moran for the lead on lap 26 and — this time — stayed there.

“I knew that top was getting dirty because of all them lapped cars were in the bottom,” said Culp, who gave credit to Wendell Wallace of Batesville, Ark., for the help the Dirt Late Model veteran has provided in recent weeks. “So I knew if I just held my own and bided my time and we’d have a few cautions and hope we picked the right tire … we’d have a good shot at it.

“It’s been a dream weekend just to be able to run with these guys and be competitive,” he continued. “It’s just unreal really for a guy like me to come out here and be able to run with these guys. It’s probably gonna take a couple days for this one to sink in, but after we lost that one Friday night, I was hungry for another one. We’ve been hungry ever since we got in this car and I think we’re just gonna keep getting better.”

Moran, meanwhile, fell short of his coveted first-ever WoO victory. He slipped a bit too high on lap 26, opening the door for Culp to gain command of the first WoO event since 2010 at Lone Star.

“It was hit-and-miss,” said Moran, who logged his best WoO finish of 2017. “The track got kind of dirty once they started mucking and gumming around the bottom and it made it hard to steer. I pushed up there and let Timmy by … but he was good, so congrats to him on the win.

“I wanted (the first WoO win) to be tonight. We had the spot to start, but it is what it is.”

Moran, who was the highest-finishing WoO rookie, was encouraged by his runner-up outing.

“We’ve been struggling a little bit once the track slows down,” Moran said. “We went and tested yesterday (at Ark-La-Tex) … it’s awesome to get out here and have a podium finish. Hopefully we can keep the ball rolling next week.”

Sheppard, 24, wasn’t quite fast enough to seriously challenge for a second straight win.

“I don’t think we tightened up enough,” Sheppard said. “They could get around that bottom a little bit better than I could, and (turns) one and two was just too dirty on the top for me to get a run going. There at the end I just let it hang out to see if I could do anything with him, but they did a real good job.”

Jared Landers of Batesville, Ark. — making his first start since a torn carotid artery sidelined him indefinitely last August — brought out the first caution flag when he slowed on lap six in his David Peterson-owned machine. Shane Clanton of Zebulon, Ga., triggered caution conditions on lap 17 when he slowed while running in fourth place while Joey Coulter of Charlotte, N.C., caused the final slowdown on lap 34 when he fell off the pace.