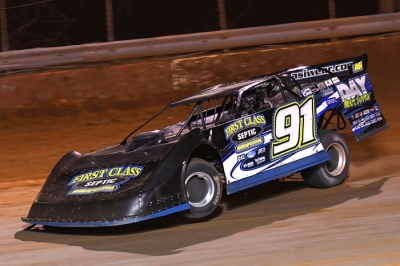 Tyler Erb is fourth in the WoO points chase. (dt52photos.com)

Tyler Erb of New Waverly, Texas, has good reason to be overly anxious for this weekend’s World of Outlaws Craftsman Late Model Series tripleheader that visits tracks in Mississippi, Arkansas and his home state.

For starters, all three races — Friday at Whynot Motorsports Park in Meridian, Miss., Saturday at I-30 Speedway in Little Rock, Ark., and Sunday at Lone Star Speedway in Kilgore, Texas — come on turf that the fast-rising 20-year-old knows better than virtually any other track on the WoO schedule.

“Hopefully, these will be the three best races we’ll have all year,” Erb said. “They’re all pretty much around our house at tracks we’re familiar with.”

Beyond that, however, is the simple fact that the weekend will allow Erb to get back to the relative sanctuary of WoO competition after what was a rather rough month for him. He didn’t spend the entirety of the time period since the end of his head-turning Georgia-Florida Speedweeks trip in February prepping his equipment and enjoying some downtime. For nearly half of the break, Erb was flat on his back.

Upon returning home from Florida in late February, Erb underwent surgery to have his tonsils and adenoids removed and a deviated septum in his nose repaired in an effort to correct sinus issues he’s been suffering. With a followup procedure adding to his recovery time, it took him until this week to feel truly ready for competition again.

“I was getting terrible sinus infections and was congested all the time so they said having this done would help all that,” Erb said. “They broke my nose to fix (the deviated septum), too, so I was pretty out of it for a couple weeks.

“It was terrible,” he continued. “I’d rather go fishing or something (during a lull in the racing schedule). I had to lay in bed for like 10 days and not do anything.”

Erb “wasn’t really 100 percent” when he decided to return to the cockpit for last Friday night’s unsanctioned Pelican 50 at Ark-La-Tex Speedway in Vivian, La.

“After practice (last Thursday at Ark-La-Tex) I went to Whataburger and I ate a hamburger and that was the first thing solid thing I’d eaten in like a week,” Erb said. “Other than that, it was like ramen noodles, milkshakes and stuff.”

Soon after registering a ninth-place finish in the Pelican, however, Erb bounced back to his normal, rambunctious self.

“I’m ready to go, bud,” he said while prepping his trailer before leaving his shop for this weekend’s races.

Erb has made only a handful of starts at Whynot — his most recent was a 16th-place finish in last year’s Fall Classic — but he possesses quite a bit of experience at the swing’s other two ovals. He’s entered 18 events (mostly SUPR and Comp Cams Super Dirt Series shows) at I-30 since 2012 and owns seven top-five (best runs: a pair of seconds, in ’12 and ’16) and 14 top-10 finishes. At Lone Star, he’s competed in nine events since 2013, falling short of a top-10 finish just twice (including a 13th-place outing in the track’s ’13 Lucas Oil Late Model Dirt Series event) and claiming a SUPR-sanctioned win there on Aug. 30, 2014.

Hot off his breakout Speedweeks performance — he was the only driver to qualify for 12 features and was victorious in a UMP DIRTcar-sanctioned show on Feb. 12 at North Florida Speedway in Lake City — Erb is a popular choice among Dirt Late Model observers to grab his first-ever WoO victory this weekend. He’s heard that talk.

“That gets me excited, but I know the redraw and everything has to go right,” said Erb, who enters the weekend fourth in the WoO points standings. “I mean, I would’ve never expected to go to Screven (Motor Speedway in Sylvania, Ga., for last month’s WoO opening weekend) and run top-five twice, but if I would’ve drawn eighth, it probably would’ve changed my finish. So I know if we can start in the first two, three rows at any of these tracks, I feel like we’ve got a really good shot.

“It would be really awesome (to win at Lone Star),” he added. “All my friends and family are going, so it would be unbelievable to win my first World of Outlaws race there.” — Kevin Kovac

If Morgan Bagley could claim to have competed in as many events at Lone Star Speedway as he’s attended there, then there would be no denying what WoO regular has an edge when the tour visits the track on Sunday night.

But while Bagley, 30, has a deep connection to Lone Star — he lives barely a half-hour away from the facility in Tyler, Texas, and his father, Ronnie, was a part-owner of the track throughout Bagley’s adolescence — he’s turned only a modest number of laps around the current 3/8-mile oval.

“I pretty much grew up at Lone Star but I haven't raced on it as much as I’ve been to it," said Bagley, who ranks 13th in the WoO points standings entering the weekend. “I’ve raced on the new configuration eight times or so, but I’ve probably watched 200 races there as a kid.”

Bagley actually made his driving debut at Lone Star in 2003, running weekly in the IMCA Modified division. Early in the next season, however, the track closed down — and when it reopened in 2009, under new owners Sam Hafertepe Sr. and his wife Lisa, Bagley was already primarily a traveling racer with his open-wheel Modified. He made only a handful of Modified starts at Lone Star in 2009-10, and since 2011 — the year Bagley entered the Dirt Late Model ranks full time and the Hafertepes shortened the speedway from its sprawling half-mile layout to its current, cozier 3/8-mile size — he’s entered a grand total of nine full-fender events there.

Of course, Bagley does own three Southern United Professional Racers (SUPR) series wins on Lone Star’s smaller oval, in 2011, ’13 and last November, when he captured the Lone Star Turkey Nationals for his lone triumph of the 2016 season. The only WoO regular with comparable experience at the track is Erb, who finished second in last November's Turkey Nationals feature, so Bagley should possess some extra confidence that Lone Star could be the place where he finally breaks down the door to the WoO circuit’s victory lane in his fifth season as a traveler.

“It’s the closest race to home,” Bagley said. “It will be nice for the people that never get to see the Outlaws that they will get to see us there. It’s a lot of pressure too, racing in front of your hometown people. We’ve always run good there the last few years we’ve raced there, so the fans will expect that out of us. But they don’t realize that it's going to be a little bit of a different crew (of challengers) that will show up this time, so it will make it a little bit harder.” — Kayla May

Long-time I-30 Speedway promoter Tracey Clay has witnessed Hall of Famer Billy Moyer of Batesville, Ark., reach victory lane repeatedly at the quarter-mile oval during her three decades at its helm.

But might Clay see another Moyer become an I-30 winner in this Saturday night’s WoO 50-lapper? She wouldn’t rule it out.

After all, Moyer’s 29-year-old son, Billy Moyer Jr., is practically frothing from the mouth to claim a checkered flag at his home-state track.

The younger Moyer enters the WoO weekend hot off his first triumph of 2017 — a March 18 Mississippi State Championship Challenge Series score at Jackson Motor Speedway in Byram, Miss. — and carrying the confidence the comes from running well at I-30 in the past. While Junior’s last I-30 start — in the 2014 WoO event won by his father — brought him a 21st-place finish, his previous appearance there in 2013 for a Comp Cams Super Dirt Series race resulted in a fourth-place run and he’s finished as high as second (in a ’12 Comp Cams show).

“I think we have a possibility (to win) if everything lines up right,” said Moyer Jr., who sits 11th in the WoO points standings as he sets off on another tour of duty with the WoO after winning twice and capturing rookie of the year honors last year. “We’ll have to have a little luck on our side, but I think we have a good car and a bunch of laps around that place. The main thing is to get down there and qualify good, get in the redraw and wind up in the first two or three rows, and then anything could happen. We definitely have a chance.”

The elder Moyer, meanwhile, will join his son in the I-30 field as the semi-retired 59-year-old makes his first competitive start since January’s Keyser Manufacturing Wild West Shootout in Arizona. His two weekend appearances (he also plans to race at Whynot on Friday night) will also mark his first action since signing a new major sponsorship deal with Crop Production Services, the company that has supported his son’s racing efforts for several seasons. — Kayla May

A triumph in Sunday night’s WoO show at Lone Star would hold extra significance for Shane Clanton of Zebulon, Ga., and Chase Junghans of Manhattan, Kan., Capital Race Cars teammates who view the track as somewhat hallowed ground because of its connection to Jungians’s late older brother Grant, an open-wheel modified racer who died one year ago after a lengthy battle with cancer.

“It would mean a lot if I could pull a win out of this race,” Clanton said of Lone Star’s weekend-ending program. “Lone Star was one of the last places that Grant won at (in a modified). If you knew the kid he was a fighter for the last four or five years of his life, and at the end of the day all he ever wanted to do was race. It would be pretty special to win a race here to honor him.”

Clanton, 41, was so fond of Grant Junghans that the colors and graphics scheme on his No. 25 machines this year is adopted from Grant’s modified car.

“Chase started buying cars from us in 2013 or 2014 and so I’ve known them for a while now,” said Clanton. “The Junghans asked me to drive Grant’s modified during his memorial race in August (last year at Kansas’s Lakeside Speedway) and he had done up that paint scheme before he passed away. We were fortunate enough to put it on that car for the memorial race, and then afterwards we talked to his dad (Greg) to see if we could run with it this year (on the Late Model) and he said to go ahead, and so here we are.”

Clanton, who finished seventh in Lone Star’s 2010 WoO feature feature, enters the WoO weekend in a tie for ninth in the points standings after some struggles during last month’s season-opening events at Screven. The 24-year-old Junghans, who has never run a Dirt Late Model race at Lone Star, has even more catching up to do as he ranks 16th in the points battle after Speedweeks. — Kayla May