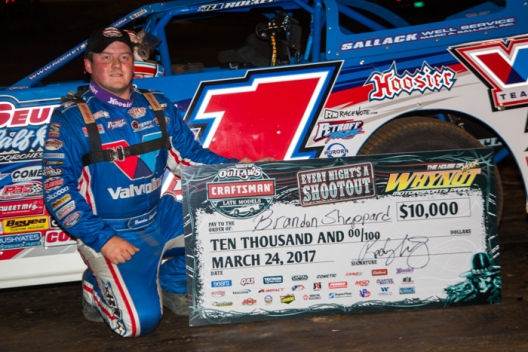 “I’ve never been here before,” a sweat-soaked Sheppard said after the frenetic feature, “and it’s a pretty awesome racetrack.”

Sheppard, who started from the pole position, was outgunned for the lead at the initial green flag by Moyer, but he hung tough and overtook the 59-year-old Hall of Famer for the top spot on lap 20. Then Sheppard had to deal with the 27-year-old Culp, who grabbed second from Moyer on lap 24 and surged into the lead using the inside lane on the 31st circuit.

The ensuing first-place battle between twentysomethings saw Sheppard regain command with a powerful outside move on lap 37 and stay there to the finish, turning back a furious challenge from Culp with three laps remaining to secure his first WoO triumph of 2017 in the national tour’s first-ever visit to the 3/8-mile oval.

Culp’s bid to reach victory lane for the first time in WoO competition fell short as he settled for a career-best series finish of second, 0.464 of a second behind Sheppard in his second start behind the wheel of an XR1 Rocket fielded by his father-in-law Mark Bennings. He was triumphant in his first outing with the car one week earlier at Ark-La-Tex Speedway in Vivian, La.

First-time WoO regular Chris Madden of Gray Court, S.C., made a steady march forward from the 10th starting spot without the help of a caution flag to finish third. He stole the position in the final laps from Moyer, who settled for a fourth-place finish. Eric Wells of Hazard, Ky., completed the top five in a strong advance from the 11th starting position.

The race’s outcome was in doubt in the closing circuits as Culp hugged the low side of the track to threaten Sheppard. Culp came within inches of leading lap 47 and was able to thrust ahead of Sheppard off turn two on lap 48, but Sheppard managed to circle the rim to hang on.

“Timmy was up underneath of me pretty good,” said Sheppard, who padded his points lead with his third top-five finish in five WoO A-mains. “He put on a heck of a race … thanks to him for racing me clean.

“I’m just really fortunate to be able to drive this Rocket house car,” he added. “It’s amazing. The team’s awesome. I can’t all them guys enough. These XR1 Rocket cars are awesome. It just shows by the consistency and the finishes.”

Culp showed no disappointment with his runner-up finish, which continued his rebound from a frustrating Georgia-Florida Speedweeks in February that was followed by a shift in his race team’s direction with the dissolution of his participation in the GRT house car program.

“Shoot, I’m just tickled to be up here and be able to compete with these guys,” Culp said. “I wish we could’ve got it done. Lapped cars kind of got me stuck on that bottom a couple times. I tried to roll that middle … I think if it weren’t for those lapped cars we could’ve maybe had a little different outcome.

“But shoot,” he continued. “To run second with this thing … it’s the second night on this car and we’ve got one win and a second. You can’t hardly beat that.”

Madden, 41, became stronger as the feature wore on but ran out of time to challenge the leaders.

“We had a good race car in the feature,” said Madden, who moved from fifth to third in the WoO points standings. “I’d like to have started a little further up front … it could’ve been a different story.”

Notes: Sheppard’s seventh career WoO feature win was his first since April 18, 2015, at Farmer City (Ill.) Raceway. It was his fourth Super Late Model victory of the young ’17 campaign; he won three times during Georgia-Florida Speedweeks. … All 24 feature starters were running at the finish with 17 drivers on the lead lap. … Shane Clanton of Zebulon, Ga., had a rough night, relying on a provisional to gain entry to the A-main and then starting and finishing 23rd. He struggled throughout the 50-lapper and was lapped twice, dropping the pre-season championship favorite to 11th in the points standings, 86 points behind Sheppard. … Chad Hollenbeck of Kingsley, Pa., was surprise addition to the WoO’s Deep South swing. He started the feature thanks to a points provisional and finished two laps down in 24th. … WoO rookie aspirant Donald Bradsher of Burlington, N.C., recorded his first-ever WoO fast-time honor in qualifying but wasn’t a factor in the feature, finishing one lap down in 21st. ... Seventh-place finisher and former Coors Light Fall Classic winner Mike Marlar of Winfield, Tenn., piloted a new Rocket XR1. … The event was the first of a three-race weekend that also includes stops at I-30 Speedway in Little Rock, Ark., and Lone Star Speedway in Kilgore, Texas.