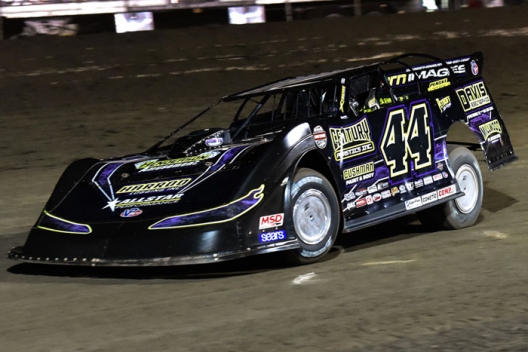 BARBERVILLE, Fla. (Feb. 20) — Chris Madden of Gray Court, S.C., drove to the high side of Brian Shirley after a lap-13 restart to take the lead and never looked back en route winning Monday's DIRTcar Nationals opener at Volusia Speedway Park.

Madden earned $7,000 for his first-ever DIRTcar Nationals victory and first win at Volusia since winning the Gator 100 to close out the 2006 World of Outlaws season. He notched his second victory in three days — Madden won Saturday's World of Outlaws race at Screven (Ga.) Motor Speedway — by exercising patience through the early stages of Monday's 30-lapper.

When Chub Frank's blown right rear tire brought out the second caution of the race, Madden found the opportunity he needed.

“We just got a good restart there and got that clean air and was able to (get) the lead,” said Madden. “We weren't really good enough to run the bottom behind him, but we could run the middle of the race track and the top pretty good. But the bottom had too much grip in it … the top was too far out to make the move really.

“So we just had to kinda maintain and not burn our stuff up and wait for the timing to be right. We was catching him right before that caution came out and then we just had the opportunity (with) the caution to make our move.”

Once out front, Madden stretched his advantage to as much as three seconds before closing in on the tail of the field. With Madden approaching lapped traffic, Shirley managed to close the gap back to within a second with three laps remaining, before settling for a runner-up finish, 1.5 seconds behind the winner.

“We just made one of them bad moves on the restart there,” Shirley said. “It was just one of them deals where sometimes running second is better than being in the lead. I felt like we were pretty good there for a long time. We just needed to run up in the top there. Live and learn and hopefully next time we won't make that mistake.”

Shirley, who won the fourth heat race and started from the pole of the main event, blasted into the lead ahead of fellow front row starter Chub Frank at the start. With Frank working the topside, Shirley rolled the bottom and pulled away to a comfortable advantage through the first third of the race. Frank was already losing ground to the leaders when he popped a right rear tire.

Third-starting Tyler Erb, winner of the third heat, fell in behind the leaders and began to log laps as he continued to gain both experience and momentum during his best-ever Speedweeks. He would've liked to have been able to challenge Madden and Shirley, but was happy with his second top-three finish in the last three days.

“We've got a really good car right now,” Erb said. “Right before that caution there, they were all running that middle and sliding up through that black. I started getting that top worked in in (turns) one and two and I really thought that I could get by them. As soon as that caution came I saw his crew guy waving him up, waving him up and I gave it about two good laps up there and I was just … I really don't have enough experience to know what it was going to do to tires.”

Erb moved back down the track where he ran just in front of a good battle for fourth. Dennis Erb Jr., who started 11th, first took the position away from G.R. Smith on lap 15 and appeared to have the spot locked up. But a late-race rally by 10th-starting Clanton shuffled Erb Jr. back to fifth at the finish.

The feature field rolled onto the track at 9:45 p.m. ... There would seem to be a good chance that a first-time DIRTcar Nationals feature winner will emerge in Monday’s 30-lap headliner. Just seven of the 24 starters have won an event at Volusia during Speedweeks; the only top-10 starters with DIRTcar Nationals victories on their resume are outside polesitter Chub Frank of Bear Lake, Pa. (last win: 2006 opener) and 10th-starter Shane Clanton of Zebulon, Ga., who captured last year’s finale. … Fourth-starter Chris Madden of Gray Court, S.C., has never won during the DIRTcar Nationals but he did reach victory lane at Volusia in the 2006 WoO season-ending Gator 100. … Third-starter Tyler Erb of New Waverly, Texas, is making his first career feature start at Volusia. The 20-year-old’s only previous visit to the half-mile oval was for last year’s DIRTcar Nationals and he failed to qualify for the four races he entered. … Eric Wells of Hazard, Ky., who starts sixth in the feature after registering the overall fastest lap in qualifying, has enjoyed success in the past at Volusia, but it’s been awhile. He scored a career-best runner-up finish in the 2013 DIRTcar Nationals opener and recorded a pair of third-place finishes in ’14, but he hasn’t cracked the top five the last two years. In ’16, in fact, he accented three DNQs to start the week with consecutive finishes of 13th, 28th and 23rd.

Brandon Sheppard took the lead from Devin Moran following a restart with two laps remaining to win the first B-main. Moran was second, with McCreadie rallying from a bad start to finish third. Joey Coulter snagged the final transfer spot from Ricky Weiss in the waning laps.

Texan Tyler Erb drove by Jason Fitzgerald with a lowside pass midway through the third heat and pulled away for a convincing win. Dennis Erb Jr. finished third ahead of Kyle Bronson. Rick Eckert was fifth.

Chris Madden dominated the second heat race, winning easily over Eric Wells and former World of Outlaws champion Shane Clanton. Picking up the final transfer spot was Coleby Frye. Tim McCreadie rallied back to fifth after drawing a caution on the first lap.

Chub Frank got the jump on Chase Junghans at the start and led the distance, winning by .528 of a second over Junghans. Junghans held off G.R. Smith for second, while Boom Briggs claimed the final transfer spot. Brandon Sheppard fought an ill-handling car and finished seventh. Chad Hollenbeck brought out an early race caution.

The Dirt Late Model portion of the DIRTcar Nationals at Volusia Speedway Park kicks off on an absolutely gorgeous day: sunny skies and a high temperature of about 80. … Forty-three cars are signed in for the evening’s action. … Drivers who have cars in the pit area but aren’t entered in Monday’s program include Clint Bowyer Racing teammates Darrell Lanigan and Don O’Neal, Steve Casebolt, Rambo Franklin, Austin Hubbard and Kenny Pettyjohn. In addition, Stacy Boles has a car for Ray Cook to drive but the North Carolina racer and promoter isn’t in competition tonight. … Among the notable drivers making first-ever starts at Volusia are Devin Moran of Dresden, Ohio, teenager Hudson O’Neal of Martinsville, Ind., and Jason Jameson of Lawrenceburg, Ind., who is behind the wheel of Kentuckian Justin Rattliff’s No. 16. … With the start of his first full season in the Dream Racing No. 116 going so well during Speedweeks, Brandon Overton of Evans, Ga., is looking to run all six DIRTcar Nationals events. His team had originally planned to enter just the final four shows of the week. … Billy Moyer Jr. of Batesville, Ark., captured his first-ever Speedweeks feature in last year’s DIRTcar Nationals opener and is ready to chase a repeat tonight. … World of Outlaws Craftsman Late Model Series race director Bret Emrick is returning to his announcing roots to call the UMP DIRTcar-sanctioned Late Model events this week. WoO tour announcer Rick Eshelman will assist in calling the UMP modified events before taking to the Late Model microphone for the three WoO shows. … Nick Hoffman of Mooresville, N.C., who has won three UMP modified features during the 2017 DIRTcar Nationals, will pull double-duty tonight as he makes his first-ever attempt at Dirt Late Model racing at Volusia. ... In the wake of Sunday night’s WoO sprint car crash that saw Dale Blaney flip over the turn-two wall and strike three pitside observers who had to be hospitalized, World Racing Group officials have removed the pit grandstand that was located outside the second corner in the restricted area where spectators are no longer allowed. One of the injured spectators was released Monday while two others remain at Halifax Health Medical Center in Daytona Beach, Fla., including Kelly Kovski of Springfield, Ill., who manages the Hoosier Tire Midwest store in Springfield and serves as the crew chief for NASCAR Infinity Series driver Justin Allgaier’s open-wheel modified racing. Kovski, who also oversees daily operations for Allgaier Racing Shocks, is listed in stable condition.

The six-night DIRTcar Nationals begins with a 30-lap UMP DIRTcar-sanctioned event paying $7,000 to win. Two more evenings of UMP action will follow before the World of Outlaws Craftsman Late Model Series takes the spotlight on Thursday, Friday and Saturday nights.

Monday night’s program includes group qualifying, four heat races, B-Mains and the 30-lap headliner. Group qualifying by heat races will be utilized; results from time trials will be used to align the heats, and the four heat winners will redraw for starting spots in the first two rows of the feature.