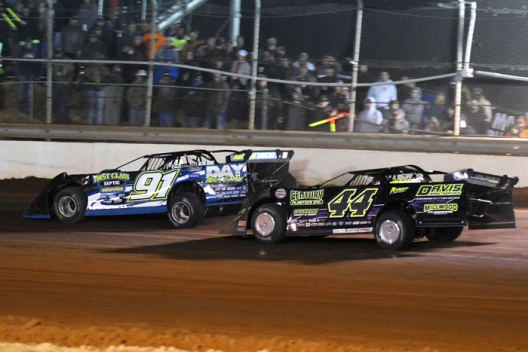 Winning the night’s fourth heat race and redrawing to start outside the fourth row, Madden worked his way through the front of the field, using momentum from mid-race restarts to gain position. Running second when the race’s final yellow flag waved on lap 36, Madden set his sights on Erb, reeling in the race-long leader to score his 10th career World of Outlaws victory.

“I rode for a long time there just trying to save my tires,” Madden said after the race. “My car was extremely good and we were able to run the top and get some positions right there off of the restarts. I made a couple of passes there during the race on the top there in one and two. The car was just very maneuverable tonight. We were able to save our tires and be there at the end.”

Slipping ahead of fellow front-row starter Billy Moyer Jr. of Batesville, Ark., in the first corner, Erb charged out to an early lead. Approaching the rear of the field by the 10th lap, the Texas driver successfully navigated lapped traffic, never opening the door for a serious challenge up front.

As Madden worked his way past Brandon Sheppard of New Berlin, Ill., and in to the third-place spot on a lap 24 restart, the race was slowed by a series of cautions. Erb was able to maintain his position through the yellows, but was unable to hold off Madden in the final laps.

“It’s extremely good to get a win right here,” Madden said. “This place has not been very good to us at all. So to come down here and get a second and a win is huge for us.”

Erb settled for a runner-up finish, with Moyer Jr. running third. Sheppard finished fourth, with Brandon Overton of Appling, Ga., advancing from the 12th starting spot to round out the top five.

“I just killed my tire,” Erb said. “I ran way too hard. I was trying to slow down. My crew guy was telling me I had a good lead. I was just a little anxious, wanted to get the first win. But it was another good night. Our tire made it. So we’ll just move on and go to Ocala tomorrow."

Moyer Jr. gave credit to Madden for a mid-race pass that put him in position to get the win.

“We had a good car,” Moyer Jr. said. “(Madden) runs on this dirt a lot and just knows how to drive. Our cars were probably about equal, he just outdrove me. On that restart I kind of protected the bottom too much and he just rolled me around the outside. He did what he had to do. He done a hell of a job."

Notes: Madden's last World of Outlaws victory came in the Oct. 29 World Finals finale at The Dirt Track at Charlotte. ... The race was slowed by five cautions. ... The first yellow flag waved on lap 19 when Dale Hollidge slowed with a flat tire. … Shane Clanton spun in turn four to draw a caution on lap 22. … A yellow flag flew on lap 24 when Dale McDowell slowed on the frontstretch. … Jason Covert slowed on the backstretch to draw a caution on lap 27, just as Brian Connor got in to the turn-one wall. … Connor and Chris Ferguson spun in turn four to draw the final caution on lap 36.

Charging around the outside, Ray Cook grabbed an early lead, with Michael Brown in tow. Cook began stretching his as the race neared the halfway mark, with Shane Tankersley slowing in turn one to draw a caution on lap four. Another yellow flag flew on the ensuing restart when Ross Bailes spun in turns one and two. Cook pulled away to win the second consolation, with Brown and Brian Connor transferring to the main event.

Polesitter Rick Eckert jumped to the lead at the drop of the green flag, as third-starting Jason Covert shot ahead of outside polesitter Joey Coulter in turn two. Covert challenged Eckert as the race reached the halfway point, with Austin Theiss spinning in turn four to draw a caution on lap seven. Another yellow flag waved on the ensuing restart when Coleby Frye spun in turn two. Battling for the final transfer spot, Joey Coulter and Chub Frank collided on the next restart, with Coulter spinning on the frontstretch to draw a caution. Holding his lead through the restarts, Eckert picked up the win, with Covert running second. Frank finished third to transfer to the feature.

Polesitter Chris Madden charged to the lead at the drop of the green flag, with Brandon Overton and Devin Moran in tow. A yellow flag waved on the fourth lap when Craig Wolford got in to the turn-one wall. Ross Bailes drew a caution on the ensuing restart when he spun in turn one. Madden held his lead on the restart, as Moran pulled ahead of Overton in turns one and two. Madden won the fourth heat, with Moran and Overton rounding out the top three. Brian Shirley grabbed the fourth and final transfer spot.

A yellow flag flew on the opening lap for a multi-car tangle in turns three and four, bringing the race to a complete restart. As the race went green polesitter Billy Moyer Jr. charged to the lead, with second-starting Tyler Erb hot on his tire tracks. Stretching his lead in the final laps, Moyer Jr. picked up the heat race win, with Erb finishing runner-up. Ivedent Lloyd Jr. ran third, with Chris Ferguson grabbing the fourth and final transfer spot.

Shooting around the top side, outside polesitter Frank Heckenast Jr. pulled ahead of fellow front-row starter Brandon Sheppard to take an early lead, as Morgan Bagley outdueled Shane Clanton for the third-place spot. As the race neared halfway, Sheppard began closing in on Heckenast, but his efforts would not be enough. Heckenast won the first heat, with Sheppard and Bagley rounding out the podium. Clanton finished fourth to transfer to the feature.

Showers have been in the vicinity throughout the afternoon, but are not expected to hinder Saturday’s racing program. … Eric Wells of Hazard, Ky., was scheduled to start on the pole of Friday’s main event, but exited the track during parade laps with a broken right-front ball joint. He’ll be back in action on Saturday. … Brandon Overton of Appling, Ga., has finished outside of the top-three just once since climbing behind of the wheel of the Randy Weaver-owned No. 116. He finished third in Friday’s Winter Freeze opener. … While the 2017 season plans of Steve Casebolt have been speculated since his spilt with Tye Twarog, the Richmond, Ind., driver said Saturday that he was taking it day-by-day. However, entering Screven, Casebolt was among the 19 drivers listed to run the WoO tour this year. … Along with Friday’s winner Rick Eckert, 2015 World of Outlaws champion Shane Clanton of Zebulon, Ga., is the only other driver to capture multiple Winter Freeze victories. Clanton finished a quiet 20th in Friday’s show, but is aiming to improve on Saturday. … Four drivers have joined the field for Saturday’s Screven finale, including Ross Bailes of Clover, S.C., and Nick Davis of Millsboro, Del., who made the trip from East Bay following Saturday's rainout.

Former series champion Rick Eckert of York, Pa., was the winner of Friday’s $8,000 Winter Freeze opener. Eckert, who is one of just two drivers to capture multiple victories in Screven’s Speedweeks event, will be back in action on Saturday.