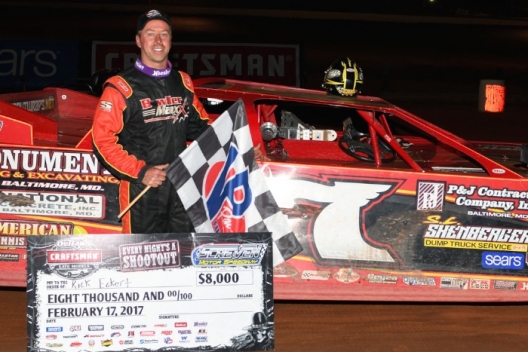 SYLVANIA, Ga. (Feb. 17) — It was all Rick Eckert on Friday night at Screven Motor Speedway, as the York, Pa., driver led the entire 40-lap distance to earn an $8,000 World of Outlaws Craftsman Late Model Series victory in the opening night of Winter Freeze VII.

“We won here last year on the Saturday night deal and then couldn’t get back in," Eckert said after the race. "We got second a bunch of times but we just couldn’t win. Hopefully that don’t happen again. We made some changes over the winter and our car felt really good all weekend. We can't run the qualifying times that some of those guys can, but we can race really well.”

Finishing second in his heat race and redrawing to start outside the front row, Eckert shot to the front of the field at the drop of the green flag, stretching his lead by the fifth circuit.

As Eckert and the rest of the frontrunners approached lapped traffic on lap 10, Chris Madden of Gray Court, S.C., begin closing in on the race leader. But Madden’s efforts were thwarted when the race was slowed by a lap-14 caution, giving Eckert clean air at the front of the field.

The race approaching the halfway mark, Eckert held his lead over Madden, with sixth-starting Brandon Overton of Appling, Ga., using momentum early restart to move in to the third-place position.

Disaster nearly struck on a lap-26 restart when Madden and Overton collided in a tight battle for the runner-up spot, setting off a chain reaction that left Brent Dixon of Elberton, Ga., spinning in turn two. But Eckert was able to maintain his lead through the late-race restarts to score his second consecutive Winter Freeze victory.

“I was really comfortable," Eckert said. "There at the end I was watching the scoreboard and I just slowed up. When I caught traffic earlier I could run outside them but it just got where it was so dusty out there that it was hard to get out there. When you pinch yourself behind them it just makes it harder on you, so I was trying not to get up there behind (Shane Clanton) and them and pinch myself in there."

“I’d like to have seen 50 laps tonight,” Madden said. “I think we could have had a shot at winning it. But congratulations to Rick and all of them guys. We need to get a good finish tomorrow and move on to Voluisa and do the best we can do."

Posting a third-place finish, Overton brushed off the lap-26 collision with Madden. He'll look to build on his podium run heading in to Saturday's Winter Freeze finale.

“We just got kind of hung together on that start, no big deal,” Overton said. “It’s tight coming off through there anyway. I can’t thank Randy Weaver and Chip stone enough for giving me the opportunity to drive this car. They’ve got a really nice ride here and it’s been good ever since we come out of the box with it."

Notes: Eckert, who has 36 career World of Outlaws victories, was the winner of last year’s Winter Freeze finale. … The first yellow flag waved on lap 14 when Steve Casebolt slowed in turn four. … Michael Brown stopped to drawn a caution on lap 26. … A turn-two collision sent Brent Dixon spinning to draw a caution on the lap-26 restart. … Shane Clanton drew a caution on lap 27 when he returned from the pit area, never picking up speed and slowing in front of the frontrunners. … Initially slated to start on the pole, Eric Wells retired during pace laps with mechanical issues; Chris Madden inherited the position. … Josh Langley and Michael Brown were late to the feature lineup and forced to start on the tail of the field.

The race was brought to a complete start when Tyler Bruening spun in turn three to draw a caution on the green flag lap. Powering around the outside, Ray Cook pulled ahead of Chase Junghans to take an early lead. Sliding out of turn four, Junghans moved to the front of the field on the third lap. Junghans won the consolation, with Cook and Josh Langley rounding out the top three to transfer to the feature.

Steve Casebolt edged ahead of Chris Ferguson at the line to lead the first lap, with Shane Clanton sliding in to second one circuit later. Clanton began reeling in Casebolt at the halfway mark, as Morgan Bagley spun in turns one and two to draw a caution on lap five. In a battle for the lead with Casebolt and Clanton, Chris Ferguson spun in turn two to draw another caution on the restart. Casebolt won the consolation, with Clanton and Joey Coulter transferring to the main event.

Polesitter Eric Wells shot to an early lead, as a three-car battle for the runner-up spot ensued behind him. A yellow flag waved on lap two when frontrunner Dale McDowell slowed in turn four. Wells began stretching his lead as the race neared the halfway mark, with second-running Craig Wolford spinning in turn two to collect third-running Bliiy Moyer Jr. on the fourth lap. Chris Madden began closing in on Wells later-race, but his efforts wouldn’t be enough. Wells won the fourth heat, with Madden running second and Michael Brown finishing third. Brent Larson grabbed the fourth and final transfer spot.

Charging around the high side, outside polesitter Jason Covert led the opening lap, with a yellow flag waving when Tyler Bruening spun in the bottom of turns one and two.  Covert held his lead through the restart as third-starting Devin Moran attempted to slide past Brandon Sheppard for the second-place spot. A yellow flag flew on lap three for a turn-one tangle involving Brian Connor and Colbey Frye. Looking to take the lead on the restart, Moran attempted to slide ahead of Covert and Sheppard exiting turn four. Covert got crossed up in to the turn four wall to draw a caution, with Sheppard pulling ahead of the field. Sheppard won the third heat, with Moran running second. Casey Roberts finished third, with Frank Heckenast Jr. running fourth to transfer to the feature.

Second-starting Brian Shirley charged to the lead at the drop of the green flag as polesitter Steve Casebolt slipped back after getting too high in turn two. Shirley held a solid lead at the halfway point, with second-running Brandon Overton attempting to reel in the race leader. Shirley grabbed the heat race win, with Overton and Brent Dixon rounding out the podium. Dale Hollidge finished fourth to transfer to the feature.

The race was restarted twice when front-row starters Tyler Erb and Chris Ferguson jumped the start, moving Chub Frank and Rick Eckert to the front row. A yellow flag flew on the opening lap when Ferguson spun in the bottom of turns one and two; Frank slowed on the backstretch and was pushed off the track under the caution. Erb charged to the lead as the race went green, with Ferguson shooting from the rear of the field to join the top five in the early running. Another yellow flag waved on lap three when a smoking Anthony Sanders slowed on the frontstretch. Erb picked up the heat race win, with Eckert running second. Dennis Franklin held off challenges from Ivedent Lloyd Jr. to finish third, with Lloyd taking the fourth and final transfer spot.

Among drivers kicking off their first-ever World of Outlaws points chase over the Screven weekend are Devin Moran of Dresden, Ohio, Chris Madden of Gray Court, S.C.,  and Donald Bradsher of Burlington, N.C. … Three drivers enter Screven with a Speedweeks victory under their belt. Brandon Overton of Appling, Ga., was the winner of the Feb. 10 Lucas Oil Series event at Golden Isles Speedway near Brunswick, Ga.; Tyler Erb of New Waverly, Texas, captured a $5,000 UMP DIRTcar victory on Feb. 12 at North Florida Speedway in Lake City; and Brandon Sheppard of New Berlin, Ill., scored a $5,000 Lucas Oil Series victory on Feb. 13 at East Bay Raceway Park in Gibsonton, Fla. … Ray Cook of Brasstown, N.C., has joined Outlaws competitors at Screven, piloting a Stacy Boles-owned No. 11B. … Former WoO regular Clint Smith of Senoia, Ga., will enter Screven’s Winter Freeze for the first time since 2011. … Shane Clanton of Zebulon, Ga., the 2015 series champion, has won a Sceven Speedweeks event three out of the past four years. … Among drivers leaving East Bay to join the field at Screven is Greg Oakes of Franklinville, N.Y., and Craig Wolford of Saint Louisville, Ohio. ... There are 32 Crate Late Models on hand for Friday's program.

Former World of Outlaws champions Shane Clanton of Zebulon, Ga., and Rick Eckert of York, Pa., were the winners of last year’s Winter Freeze events. Both drivers are on hand for the weekend doubleheader.

Friday’s WoO program will include time trials, four heat races (10 laps; top four transfer), consolations and the 40-lap main event. Crate Late Models are among other divisions that will be in action.