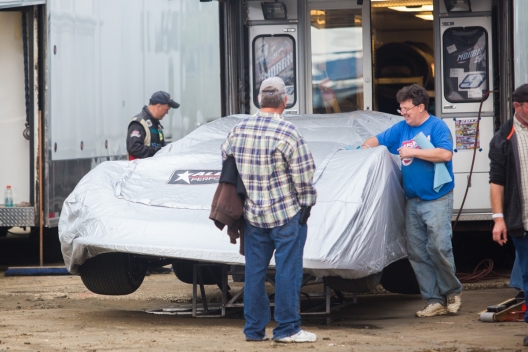 Despite the track crew's relentless efforts to work in the racetrack following an afternoon rain storm, excess moisture in the racing surface forced the cancellation of the Wednesday's Winternationals program. The $7,000-to-win non-points show will not be made up. | DirtWire

Wednesday’s drivers’ meeting took place as scheduled at 5:30 p.m., but it appears the start of hot laps will hit the track a bit later than the planned 6 p.m. because a heavy downpour hit the track just after 4 p.m. While the rain slowed within 10 minutes and stopped completely as sun peaked through the clouds at 4:20 p.m., the deluge left the racetrack extremely water-logged. … A 41-car field is signed in for action. … Scott Bloomquist of Mooresburg, Tenn., remains hospitalized in a Tampa-area facility undergoing antibiotic treatment by IV for his infected finger. … Drivers making their first starts of the week: Clint Bowyer Racing teammates Darrell Lanigan of Union, Ky., and Don O’Neal of Martinsville, Ind., and Zack Dohm of Cross Lanes, W.Va., whose father, Tim, finished second in Tuesday night’s feature. … Prospective World of Outlaws Craftsman Late Model Series regulars who departed the East Bay pit area after Tuesday night’s action to begin preparing for the national tour’s Feb. 17-18 opener at Screven Motor Speedway in Sylvania, Ga., were Brian Shirley of Chatham, Ill., Frank Heckenast Jr. of Frankfort, Ill., Billy Moyer Jr. of Batesville, Ark., and Brent Larson of Lake Elmo, Minn. Brandon Sheppard of New Berlin, Ill., and Tyler Erb of New Waverly, Texas, plan to head to Screven after this evening’s program while Devin Moran of Dresden, Ohio, is expected to drive north after Thursday’s show. … Kyle Bronson of Brandon, Fla., is ready for competition with the same XR1 Rocket that he crashed hard in a heat race on Tuesday night. He reported that the majority of the damage was to the machine’s sheet metal. … With Lucas Oil points not offered until Friday, Steve Francis of Bowling Green, Ky., is taking the evening off after a Tuesday feature crash that left his Capital Race Car with significant body damage. … Tuesday-night winner Josh Richards of Shinnston, W.Va., was victorious in the second night of Winternationals action for the third consecutive year. … Team owner Bobby Lake of Uniontown, Pa., whose teenage grandson Michael Lake drove to a career-best Lucas Oil Series finish of eighth on Tuesday night, was hoping to field two cars this evening with Doug Horton, a West Virginia native who formerly drove for Lake and now lives in Florida, climbing into Lake’s second machine. But Horton remains a crewman for Wednesday’s program because a new transmission to replace the one that broke in Horton’s car during Sunday night’s practice session has not yet arrived.

Despite an afternoon rain shower that hit the track around 4 p.m., Wednesday’s Wrisco Industries Winternationals program at East Bay Raceway Park is still on as scheduled. The 35-lap non-points event, the third of six Lucas Oil Series shows, pays $7,000-to-win.

Brandon Sheppard of New Berlin, Ill., and Josh Richards of Shinnston, W.Va., were the winners of the first two rounds of Winternationals action. While Richards will remain at East Bay the rest of the week, this will be Sheppard’s final night at the Florida oval as he heads north for World of Outlaws action at Screven Motor Speedway in Sylvania, Ga.

Wednesday’s program will once again include time trials, heat races, consolations, the DirtonDirt.com Strawberry Dash and the main event. Provisionals (two series, one fast time and the dash winner) will make up the final two rows of the 26-car feature field.