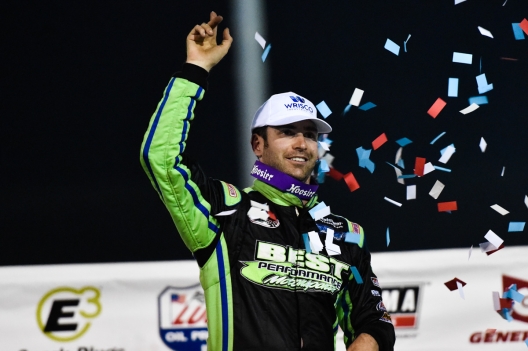 Overtaking race leader Davey Johnson of Latrobe, Pa., on lap six of 25, the Shinnston, W.Va., driver dominated the remaining distance, scoring his second victory since making his debut with the Ohio-based Best Performance Motorsports team over the weekend.

“I wouldn’t have even expected to win at Speedweeks this year,” Richards said after the race. “We just wanted to come down do our best. To have two wins already in a short amount of time is really cool for our team. I couldn’t be more proud of everyone involved with this car."

Winning the night’s first heat race to start on the pole of the feature, Johnson led the first handful of laps before falling to Richards. Slipping back to fifth, the veteran driver slowed for a caution on the sixth lap, retiring to the pit area.

Richards maintained his lead as the race resumed, with a red flag bringing the show to a standstill on lap eight for a major pileup that resulted in Steve Francis’s car coming to a stop atop the No. 99JR of Frank Heckenast Jr.

With the damage cars cleared from the racing surface and the field back under green, second-running Tim Dohm of Cross Lanes, W.Va., began closing in on Richards around the halfway mark. But his efforts wouldn’t be enough, as the four-time World of Outlaws Craftsman Late Model Series stretched his lead in the final laps to pick up his 14th career Lucas Oil Series victory.

“The track was really patchy,” Richards said. “It’s like you feel really, really good and then all of a sudden once it gets a little black, especially in to (turn) one, you see guys just take off toward the wall. The longer the race went, it was getting that way back in turn three also. We just tried to stay in the brown.”

After finishing mid-pack in Monday's opener, Dohm, a former East Bay winner, was thrilled with his runner-up finish.

“Running second to Josh Richards, there’s nothing wrong with that,” Dohm said. “The difference in last night and tonight … we qualified way better, won the heat and started up front. These short 25-lap races, you’ve got to start in the front. I just love this racetrack."

While Hubbard was disappointed with his heat race finish, which put him a couple of rows back in the feature lineup, he said he was still pleased that he had continued to improve each night of his Speedweeks campaign.

“I’m happy,” Hubbard said. “We’re getting better every night. We did it again. We did three spots, three spots … I think three more and that would be perfect."

Notes: Richards’s first Speedweeks victory came on Feb. 11 at Golden Isles Speedway near Brunswick, Ga. … Richards was also the winner of last year’s Tuesday program at East Bay. … The first yellow flag waved on lap two when Hudson O’Neal slowed in turns three and four. … Monday-night feature winner Brandon Sheppard slowed with broken rearend gears in his Rocket Chassis house car to draw a caution on lap four; Tim McCreadie pitted under the yellow. … A yellow flag flew on lap eight when fifth-running Davey Johnson slowed in turn four and retired because his car's handling had become too tight. … A red flag fell on the lap-eight start for a multi-car tangle in turns one and two that resulted in Steve Francis coming to a rest on top of Frank Heckenast Jr.’s car. Neither driver was injured.

Davey Johnson of Latrobe, Pa., starts from the pole position, giving him his best shot at victory at East Bay since his win the 2014 Winternationals finale. … Steve Francis of Bowling Green, Ky., finally had a reason to feel good after finishing third in Heat 3. “We made the race!” said Francis, who had used provisionals in his three previous starts. “We’ve worked our asses off ever since we left … we’ve had a lot of little gremlins and we finally got going better.” … Gregg Satterlee of Indiana, Pa., was forced out of his heat race by a broken driveshaft and failed to transfer in his B-Main. He came back to win the DirtonDirt.com Strawberry Dash, however, putting him in the A-main. … Kyle Bronson of Brandon, Fla., who finished fourth in Monday night’s feature, saw his Tuesday effort end early after he slammed the outside wall between turns one and two on the first lap of Heat 3. “Me and Tyler (Erb) were dicing and the air got taken off my nose and I got over the cushion,” said Bronson, whose XR1 Rocket was double-hooked back to the pit area with extensive right-side damage. “It’s real greasy up top there and it just sucked me into the wall.” … One night after leading laps and finishing fifth in the Winternationals opener, Brian Shirley of Chatham, Ill., scratched from Tuesday’s action due to a blown head gasket during hot laps. “We’re already down one motor (following an engine malfunction at Golden Isles) so we don’t want to take a chance with this one,” said Shirley, who expects to now depart East Bay early to conserve his equipment for the start of the WoO season this Friday and Saturday at Georgia’s Screven Motor Speedway. … A-main provisional starters are Corey Conley, Greg Oakes and Mason Zeigler.

Outside polesitter Jared Miley edged ahead of fellow front-row starter Ricky Weiss to lead the first lap as fourth-starting Corey Conley slowed in turn four to draw a caution. Another yellow flag waved on the ensuing restart when Miley jumped the cushion and hit the turn two wall. Brandon Sheppard began reeling in Weiss to challenge for the lead at the halfway mark, the top two pulling away from the rest of the field. Weiss held off Sheppard to win the consolation, with Brent Larson rounding out the podium.

Fourth-starting Nick Davis took and early lead, with a yellow flag waving on lap two when Dustin Linville spun on the backstretch. As Davis stretched his lead on the restart, sixth-starting Tim McCreadie began his charge to the front of the field, moving in to the second-place spot on lap four. A yellow flag flew on the fourth lap when Craig Wolford got in to the turn two wall. Charging around the outside to challenge McCreadie for the runner-up spot, Mason Zeigler spun in turn two to draw a caution on lap eight, as G.R. Smith narrowly avoided a collision. Davis won the consolation, with McCreadie finishing second. Bob Gardner ran third to transfer to the main event.

A yellow flag waved on the green flag lap as Tim Dohm got sideways in turns one and two, collecting Jared Miley and Pancho Lawler. With no laps scored, the race was brought to a complete restart. Dohm pulled ahead of polesitter Hudson O’Neal as the race went green, stretching his lead in the early laps. A red flag fell on lap four for a tangle involving Greg Oakes, Chad Hollenbeck and Lawler. Dohm held his lead on the restart, as second-running Corey Conley slipped back to fifth. Dohm picked up the heat race win, with O’Neal finishing runner-up. Freddie Carpenter ran third, with Frank Heckanast Jr. finishing fourth to transfer to the feature.

Racing side-by-side down the backstretch, Austin Hubbard edged ahead of polesitter Josh Richards to lead the opening lap. A yellow flag waved on the first lap when Kyle Bronson slammed in to the turn two wall. Hubbard his the lead through the restart, as Monday’s winner Brandon Sheppard slipped toward the rear of the field. A second yellow flag flew on lap four as Nick Kurtz slowed in turn one. Sliding ahead of Hubbard on the final lap, Richards won the first heat, with Hubbard and Steve Francis rounding out the podium. Tyler Erb grabbed the fourth and final transfer spot.

Polesitter David Breazeale charged to the lead at the drop of the green flag with fellow front-row starter Kenny Pettyjohn in tow. Breazeale holding his lead over the field, Dennis Erb. Jr. challenged Mason Zeigler for the third-place spot around the halfway mark. A yellow flag waved on lap five when Austin Rettig spun in turns one and two. Breazeale held off Pettyjohn to win the second heat, with Pettyjohn and Erb rounding out the podium. Gaining momentum from the restart, Earl Pearson Jr. edged out Mason Zeigler to finish fourth and transfer to the feature.

Polesitter Davey Johnson distanced himself from the field in the early laps, as Michael Lake and Devin Moran battled for the runner-up spot behind him. The race nearing the halfway mark, fourth-starting Jimmy Owens slipped ahead of Moran to take third. A yellow flag waved on lap nine when fifth-running Gregg Satterlee slowed exiting turn two, with Craig Wolford spinning to avoid a tangle. Johnson picked up the heat race win, with Lake finishing second. Owens ran third, with Moran grabbing the fourth and final transfer spot.

With gorgeous conditions — sunny and temperatures near 80 — once again prevailing, a 46-car field is signed in for action, including newcomers Shan Smith of Dade City, Fla., and Nick Kurtz of Greenville, Mich. … Scott Bloomquist’s car is inside his trailer at race time because the Hall of Famer is hospitalized in order to receive antibiotic treatment by IV for an infection that developed in his finger after he injured it with wire cutters. … Clint Bowyer Racing teammates Darrell Lanigan and Don O’Neal are sitting out the competition for the second consecutive night. They both plan to begin their Winternationals on Wednesday. … Colton Flinner is also inactive again. The replacement engine he was awaiting arrived at East Bay courtesy of a sponsor who hauled it south from western Pennsylvania and he installed it this afternoon, but the 2016 Lucas Oil Rookie of the Year doesn’t plan to race until Thursday night. … Freddie Carpenter of Parkersburg, W.Va., will take his turn tonight behind the wheel of the gold Kryptonite Race Car that his son Tyler drove on Monday. How will the father-and-son decide who gets the nod to race for the remainder of the week? “Rock-Paper-Scissors,” Freddie said with a laugh. … Retired Dirt Late Model standout Randy Weaver of Crossville, Tenn., is spectating in the pit area, but he’s on hand without the Dream Racing No. 116 team he oversees for driver Brandon Overton of Evans, Ga., who actually sits atop the Lucas Oil Series points standings after last weekend’s doubleheader at Golden Isles Speedway. Might Overton and the Dream Racing hauler head south later this week to enter the Friday and Saturday points races rather than run the World of Outlaws Craftsman Late Model Series events on the same days at Georgia’s Screven Motor Speedway? Weaver didn’t rule it out when asked. … Jonathan Davenport of Blairsville, Ga., has added East Bay’s Thursday, Friday and Saturday night shows to his schedule with the Barry Wright house car team.

Picking up his first career East Bay victory, Brandon Sheppard of New Berlin, Illinois was the winner of Monday’s opening event. The Rocket Chassis house car driver will be in action again on Tuesday.