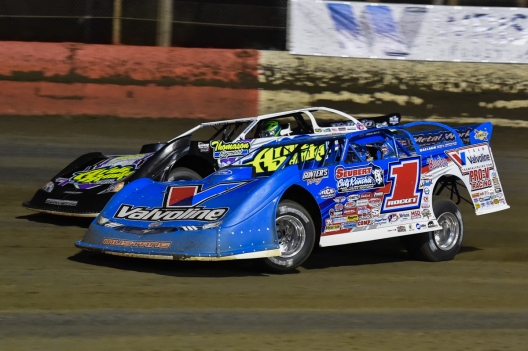 Charging ahead of polesitter Brian Shirley of Chatham, Ill., to take the lead on lap five of 25, fourth-starting Sheppard dominated the remaining distance to earn a $5,000 payday and his first Super Late Model victory since climbing back behind the wheel of the Rocket Chassis house car for the 2017 season.

“I’ve never got a win here,” Sheppard said after the race. “I’ve been coming here for quite a few years now and there’s a lot of guys that have been coming here a lot longer than me … it’s awesome to finally get one off my back. Just to get a win down here at Speedweeks is big. It definitely helps the momentum."

Shirley shot to the front of the field at the drop of the green flag to grab an early lead. As Sheppard edged ahead in a four-car battle for the lead on the fifth circuit, fifth-starting Devin Moran followed suit, claiming the runner-up spot.

As the race leaders navigated lapped traffic, Sheppard began stretching his lead, with Moran and Shirley rounding out the podium at the halfway mark. Moran lost position to seventh-starting Earl Pearson Jr. on a late-race restart, with the four-time Lucas Oil Series champion slipping past the second-generation driver to take the second-place spot on lap 20.

“I feel like we’ve got a car that can be pretty maneuverable and go wherever I need to go,” Sheppard said. "We were struggling a little bit in lapped traffic tonight. But the track was a little bit treacherous … (turns) three and four over there was a little treacherous. It was pretty slick, so it was hard to pass over there. But for the most part, I thought we could move around really good. We’re just super thankful to finally get a win and hopefully we can carry this momentum on."

“Everything worked out for me,” Pearson said. “It was right around the bottom. These two young kids, they was giving it hell out there. But it was a good run for us after Brunswick … everything just went wrong there. Here we are sitting second and we’re proud of that. To come here and finish second on the first night, we feel pretty good about that.”

Counting East Bay as one of his favorite racetracks, Moran hopes to continue to build on his podium finish in the coming nights.

“Those first 10 laps or so, it was just awesome,” Moran said. “We’ve just got to keep learning. We’re just trying to get as much knowledge as we can because this is my third car in three years. Hopefully we can get it going good and catch that No. 1 car here in the next couple of nights."

Notes: The race was slowed by three cautions. ... The first yellow flag waved on lap seven when Tyler Carpenter slowed in turn four. … Jared Miley drew a caution on lap 19 when he fell off the pace. … A yellow flag flew on lap 20 when Steve Francis spun in turn two.

There would seem to be a good chance for a first-time Winternationals winner come the end of the 25-lap feature. Just seven of the 26 starters have won a Winternationals A-main; none of the drivers starting in the first three rows have reached victory lane. The only previous victors among the 16 heat qualifiers are Earl Pearson Jr. and Josh Richards. … youngest starter in the feature is 15-year-old Michael Lake of Uniontown, Pa., who transferred through his heat in his first-ever Super Late Model attempt at East Bay. He competed at the track last year, however, in Crate Late Model competition. … A busted fuel pump knocked Jimmy Owens out of Heat 4 as he ran fourth with two laps remaining, but he gained entry to the feature thanks to a Lucas  Oil provisional. … New Yorker Greg Oakes received the Wrisco provisional that went to the fastest qualifier who didn’t qualify. … Dustin Linville of Lancaster, Ky., feared his first-ever visit to East Bay would be a short one after he slammed the turn-three wall hard on his first time-trial lap because the impact left his new Swartz car with heavy right-front damage. But after chassis builder Audie Swartz examined and worked on the machine’s frame rails and suspension, Linville was hopeful that he would be able to return to action on Tuesday night.

Polesitter Davey Johnson shot to the lead on the opening lap, with a yellow flag waving when David Breazeale slowed on the frontstretch with a flat tire. The next caution fell on lap two when Johnson, the race leader, slowed in turns three and four, giving the lead to Nick Davis as he retired to the pits. Davis held his lead on the restart, as Tyler Carpenter charged from the ninth starting spot to join the top five. Powering around the high side, Carpenter, moved in to a transfer spot with just a few laps remaining. Davis won the second consolation, with Carpenter running second. Corey Conley ran third to transfer to the feature.

Tim Dohm slid ahead of fellow front row starter Steve Francis to take an early lead. As Dohm held his lead over Francis and Tim McCreadie, Hudson O’Neal advanced from the fifth-starting spot to close in on the race leaders. Dohm stretched his lead at the halfway mark, as McCreadie and O’Neal battled for the runner-up spot. O’Neal shot ahead of McCreadie with two laps remaining to take the second-place position. Dohm won the consolation, with O’Neal and McCreadie rounding out the podium to transfer to the feature.

A yellow flag flew on the green flag lap when John Gardner lost a wheel in turn four. Polesitter Brandon Sheppard shot to the lead as the race went green, with Josh Richards slipping to the rear of the field. Sheppard dominated all 10 laps, holding almost a straightaway lead over runner-up finisher Billy Moyer Jr. at the checker. Michael Lake ran third, with Richards pulling ahead of Nick Davis on the final lap to finish fourth and transfer to the feature.

Second-starting Doug Drown slipped ahead of Austin Hubbard to take an early lead, with Gregg Satterlee running a close third. Hubbard attempted to reel in Drown as the race neared the checkers, but his efforts were not enough. Drown won the third heat, with Hubbard holding off Satterlee to run second. Satterlee finished third, with Jared Miley grabbing the fourth and final transfer spot.

Outside polesitter Austin Rettig edged ahead of fellow front-row starter Kyle Bronson to lead the first lap, with a yellow flag waving when Brian Ligon hit the wall in turns one and two. Retting began pulling away as the race went back green, as fourth-starting Earl Pearson Jr. challenged Bronson for the runner-up spot. Bronson slid ahead of in turns three and four Rettig to grab the lead just short of the halfway mark, bringing Pearson along with him. Bronson picked up the heat race win, with Pearson and Rettig rounding out the podium. Dennis Erb Jr. ran fourth, with Tim Dohm finishing fifth.

Polesitter Brian Shirley charged to the lead at the drop of the green flag as Ricky Weiss and Devin Moran battled for the runner-up spot. As Shirley stretched his lead over the field, third-starting Tyler Erb joined the fight for the second place, taking it three-wide down the frontstretch. Shirley picked up the heat race win, with Moran improving two spots to run second. Erb finish third, with Weiss running fourth. Steve Francis advanced from the eighth starting spot to round out the top five.

Beautiful weather conditions — partly sunny skies and temperatures near 80 — prevail for the start of the Winternationals. … The 44-car field features an influx of first-time East Bay Super Late Model starters, including Tyler Erb (coming off a UMP DIRTcar-sanctioned victory Sunday at North Florida Speedway) prospective Lucas Oil Series regular Boom Briggs, Gordy Gundaker, Michael Lake, Hudson O’Neal, Stephen Breeding, Dustin Linville, Timothy Culp, G.R. Smith, Brent Larson, Tyler Carpenter, Jared Miley and Craig Wolford. … Tyler Carpenter’s first East Bay start will come in the gold-colored Kryptonite machine he had on display at December’s PRI show. His father, Freddie, will likely also see time behind the wheel of the car during the week. … With only the last two events of the week offering Lucas Oil Series points, tour regulars not planning to compete in tonight’s opener are Clint Bowyer Racing teammates Darrell Lanigan and Don O’Neal and 2016 Rookie of the Year Colton Flinner, who after breaking a motor Saturday night at Golden Isles Speedway is awaiting arrival of a backup engine that one of his sponsors is hauling south from western Pennsylvania so Flinner can begin racing on Wednesday night. … Scott Bloomquist won't compete in Monday's program. He visited a nearby Urgent Care center earlier this afternoon to have the palm of his hand, which he injured while using a wire cutter, checked for a possible infection. … Zack Dohm plans to sit out Monday’s action, but his father, Tim, is entered in the program. … After failing to qualify for both Lucas Oil events at Golden Isles, Gregg Satterlee and his crew spent their Sunday replacing the many body parts damaged in a Saturday B-main accident that he believes was triggered by his machine’s blown left-rear tire. “We came here (to Speedweeks) with some used stuff (bodywork) so we were prepared to do battle,” said Satterlee, who has a new XR1 Rocket in his trailer but hopes he can make it through the remainder of the week using only his ’16-vintage mount. … Davey Johnson, who won the 2014 Winternationals finale, has a new Billy Moyer Victory Race Car ready for the week. He’s parked alongside his son-in-law Mason Zeigler, who captured East Bay’s big finale one year ago.

The 2017 Lucas Oil tour kicked off over the weekend at Golden Isles Speedway near Brunswick, Ga. Home-state driver Brandon Overton and Josh Richards of Shinnston, W.Va., grabbed victories at the Georgia oval. Richards is on hand for Monday's event, while Overton is not among the 45 entrants.

Monday’s program will include time trials, four 10-lap heat races, two 12-lap consolations, the DirtonDirt.com Strawberry Dash and the 25-lap main event. The top four cars from each heat will transfer to the feature, as well as the top three cars from each consolation. Provisionals (two series, one fast time and the dash winner) will set the final two rows of the 26-car feature lineup.