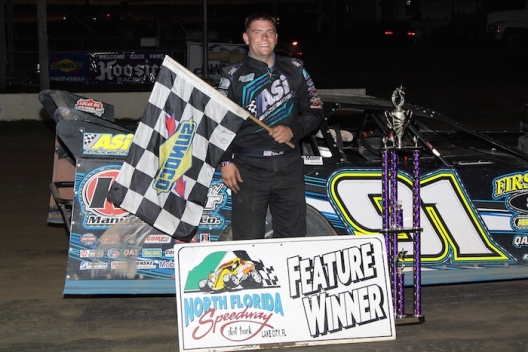 Winning his heat race and redrawing to start on the pole of the 40-lap feature, Erb charged to the front of the field at the drop of the green flag, holding his lead over fellow front-row starter Kyle Bronson of Brandon, Fla., through the early running.

Using a lap-nine restart to his advantage, third-starting Shirley pulled ahead of Bronson to take the second-place spot, challenging Erb for the lead just a few circuits later.

Battling side-by-side, Shirley edged ahead of Erb to lead lap 18, with the Texas driver surging past the No. 3s to regain the lead on the following lap.

The top two cars distanced themselves from the field as they worked through late-race lapped traffic. Disaster struck second-running Shirley on lap 38, as the veteran driver was forced to retire early with radiator issues. Erb led the remaining circuits to capture a $5,000 UMP DIRTcar victory.

“It was a great race,” Erb said in victory lane. “I can’t thank them guys enough for racing me clean. Me and (Bronson) are great friends and so is (Shirley). It was a good show, really good track, and I’m glad that we could get this race in and that everyone came out and supported it.”

As he fended off his competitors, Erb said he was careful not to make any mistakes that would cost him a trip to victory lane.

“My crew guy was telling me that they were pretty close and they were on me, so I was trying to push it harder and harder,” Erb said. "It’s just tough not getting over that lip over there. I thought I was going to do it a couple of times. But it all worked out."

“I think I over-heated my tire there at the beginning of the race,” Bronson said. We over-tightened the car a little bit, we was too tight. But after the last couple of days it feels great. To come home second is almost like a win to me. Hopefully we can carry a little momentum on to East Bay the rest of the week."

Advancing from outside the third row to round out the podium, Heckenast said he was pleased with his third-place finish.

“Tyler did a great job, so congrats to him,” Heckenast said. “We started a couple of rows back, but we’ve been working on this car, working pretty hard, so I’m pretty proud of all my guys and everyone. We’ve got a hell of a lot more racing."

Notes: The victory came in Erb’s fourth career Speedweeks start. … The race was slowed by three cautions. … David Ponton spun in turns three and four to draw the first caution on lap nine. … A yellow flag waved on lap 12 when G.R. Smith slowed on the frontstretch. … Second-running Brian Shirley pitted under a lap 38 caution with radiator issues; he was scored ninth. … Nick Hoffman of Mooresville, N.C., was the winner of the UMP modified feature.

A yellow flag flew on the green flag lap when polesitter Tyler Erb spun in turns one and two, collecting third-starting Brent Larson. With no laps completed, the race was given a complete restart. Erb and fellow front-row starter Frank Heckenast Jr. battled as the field took the green flag, with Erb pulling ahead at the halfway mark. A second yellow flag waved on lap five when Mark Whitener slowed in turn three. Erb picked up the heat race win, with Heckenast finishing runner-up. Austin Hubbard edged Larson on the final lap to run third.

Polesitter Brian Shirley led all eight laps, nearly colliding with a lapped car at the halfway mark. Second-starting Kenny Pettyjohn was able to reel in the race leader as Shirley slowed to avoid a tangle, but settled for a runner-up finish at the checkers. Jason Fitzgerald ran third.

Charging to the front of the field at the drop of the green flag, polesitter Kyle Bronson began stretching his lead at the halfway mark, finishing nearly a half straightaway ahead of runner-up finisher Billy Moyer Jr. Donald McIntosh held on to his third-place starting spot to grab a podium finish.

With last year’s Georgia-Florida Speedweeks event at North Florida rained out, the Lake City oval hosts Speedweeks show for the fourth time. … The 20 Super Late Model entries, highest in event history, is up four from the 2015 car count (16 entered). … There will be three eight-lap heat races to set the lineup for the 40-lap feature. … Recent winners at North Florida are Mark Whitener of Middleburg, Fla., and Darrell Lanigan of Union, Ky. Whitner is on hand for Sunday's event. … The field has a UMP Summernationals-like feel to it with several former tour competitors, including Billy Moyer Jr. of Batesville, Ark., and Brian Shirley of Chatham, Ill., among entrants. … Among home-state drivers in the pit are Kyle Bronson of Brandon and Jason Fitzgerald of Middleburg. … There are also 20 UMP modifieds on hand for Sunday’s show.