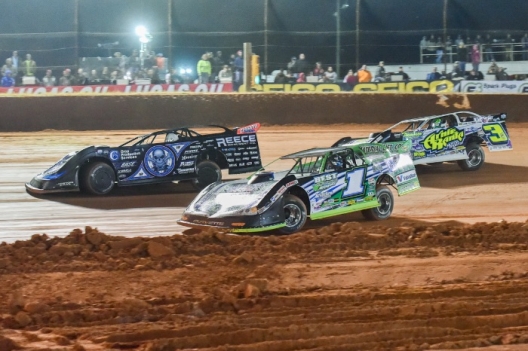 BRUNSWICK, Ga.— Josh Richards's surprising offseason move from the comfort of his father Mark's Rocket Chassis house car to the Ohio-based Best Performance Motorsports team raised eyebrows and questions heading into the 2017 season. His move from the World of Outlaws Craftsman Late Model Series — where he was a four-time champion — to the Lucas Oil Dirt Late Model Series added a bit of intrigue as well as drivers and fans prepared for the Lucas Oil season-opener at Golden Isles Speedway.

Starting from inside the third row, Richards powered by polesitter Brandon Overton on lap three and led the remaining 57 laps to win the finale of the Rhino Ag Super Bowl of Racing at Golden Isles Speedway in dominating fashion, giving the 28-year-old driver from Shinnston, W.Va., his first win with his new team in just their second start of the season.

"I don't know what to say right now. (It was) definitely one of the toughest decisions I've ever made, but I've always wanted to work with Randall (Edwards),” Richards said. "I can't thank these guys enough for the opportunity. I never would've thought we'd be up here the second night out. Everything's so different. We're just trying to get acclimated. This is a new car. Everything's new and we're just trying to start back from zero."

Bloomquist, 53, of Mooresburg, Tenn., started third, but couldn't hold off the low-running Richards in the opening laps. He finished second, giving fans a glimpse of what they expect to see throughout much of the season: a battle between two heavyweights.

Overton, who won Friday's series opener, finished third, while Brian Shirley of Chatham, Ill., rebounded from engine woes on Friday night to record a fourth-place finish. Jonathan Davenport of Blairsville, Ga., completed the top five, joining Overton as the only two drivers to finish in the top five each night at Golden Isles.

Though he finished just 3.491 seconds ahead of the defending series champion, Richards was never challenged once he took the lead. He enjoyed advantages of as much as five seconds midway through the race before settling in behind lapped cars on the bottom dominant track and cruising to the finish.

The one-two finish by Richards and Bloomquist was in stark contrast to Friday's opener, when Bloomquist arrived late, took a provisional to make the race and retired to a 26th-place finish. Though Richards fared better, his sixth-place finish left many wondering if his exodus from his family-owned equipment was indeed the right move. A win on opening weekend goes a long way to quiet the noise.

"(Friday) I made an adjustment I didn't realize I'd made and it definitely cost us big time," said Richards. "I was kicking myself afterwards. I did it by accident. We still had a good car all weekend and I just can't thank these guys enough for putting their faith into me. It feels good to get (a win) early for sure.

"I can't thank everyone enough. Randall, Garrett, Keith, Doyle, my wife Andrea and all the guys back at the shop. This is overwhelming right now. They put their faith in me and it feels good to get one for them.”

Though he struggled to get around the slower machine of Darrell Lanigan, his biggest scare came while trying to put Austin Hubbard a lap down on lap 31. Hubbard left little room on the outside as Richards squeezed by, narrowly staying off the front stretch wall.

Richards also needed to use the decidedly slower outside line to get around former NASCAR Camping World Truck Series driver Joey Coulter, who was making his first-ever Lucas Oil series start. But as soon as he cleared Coulter, he dove back to the bottom and picked up the pace once again.

Bloomquist got by Overton on lap 11 and the two waged a spirited battle for the position during the second half of the 60-lapper. Overton peaked inside Bloomquist in turn two on lap 34 and on lap 49 Overton appeared to push Bloomquist down the frontstretch. He never managed to clear the Hall of Famer, however.

"After missing practice and missing a lot of stuff last night, we got pretty close tonight,” Bloomquist said. "There's a few things I'd like to be able to change. I thought there'd be more on the outside early when they dropped the green, but it really just never did anything out there. It was just bottom dominant."

Overton was happy to claim yet another podium finish with his new team. He's finished worse than third only once since climbing aboard the Chip Stone-backed Dream Team No. 116 that operates from Randy Weaver's Crossville, Tenn., shop

"Every time (Bloomquist) was just trying to park it in the bottom there. He done what he had to do,” Overton said. "Josh just found that bottom quicker than I did. All in all, a first and third, we'll take it."

After a lengthy first consolation race, the second consi went caution-free with Brent Larson leading all the way for the win. Shane Tankersley finished second, but had to hold off mid-race challenges from Corey Conley and Devin Moran. Darrell Lanigan made a late bid for the final transfer spot but came up one position shy after getting by both Moran and Conley on the last lap. Lanigan and Dennis Erb Jr., will have to use series provisionals, as will Steve Francis and Colton Flinner, who will each use an emergency provision to start on the 13th row of the main event. Flinner will start the race in a borrowed car from Bob Gardner.

Austin Hubbard went from third to first on the first lap and went on to win a caution-filled first consolation race. He led all 12 laps to transfer to the main event along with Joey Coulter, who claimed the final transfer spot when Ryan King and Ross Bails got together in turn four, resulting in the second-running Bailes spinning out of contention on the final lap. The race was red-flagged before a lap could be completed after contact between Bailes and Gregg Satterlee caused a chain reaction wreck in turn four. Satterlee and Kyle Bronson were done for the night. Turns one and two proved to be difficult. Four cars were caught up in a spin on the second restart when polesitter Donald Bradsher went around in turn one. Others causing cautions due to single-car spins in turns one and two included Blake Spencer and Pancho Lawler. King was scored at the tail of the field after his contact with Bailes.

Doug Drown won the final heat, holding off a hard-charging Don O'Neal and Brandon Sheppard. Sheppard started from the pole but slid high in turn one to open the door for Drown, who led the distance. After falling back to fourth, Sheppard passed Darrell Lanigan down the back stretch on lap four to take over the final transfer spot. Lanigan slid back to finish sixth. The race was flagged for a pair of cautions for Brian Connor.

Billy Moyer Jr. picked up the win in the fifth heat, leading the duo of Earl Pearson Jr., and Jimmy Owens across the finish line. Ricky Weiss spun on the last lap.

Bouncing back from engine problems that plagued him a night ealier, Brian Shirley won the fourth heat ahead of Kenny Pettyjohn and Donald McIntosh. It took two tries to get the race started as spins in turn two involving a handful of drivers, including Austin Rettig and Dennis Erb Jr., slowed the start. Erb eventually pulled off the track with two laps remaining.

Polesitter Josh Richards ran away with the third heat race, winning by more than a straightaway over Tim McCreadie. Brett Hamm started third and held on for the final transfer spot. The race was slowed by one caution for a solo spin by Timothy Culp.

Brandon Overton led all the way to win the first heat. Jonathan Davenport passed Tyler Erb on lap four to secure the runner-up spot but couldn't make up ground on Overton. The top three cars pulled away by 12 lengths by lap 5.

Brandon Overton of Evans, Ga., picked up where he left off Friday night by setting the quick time during qualifying among 52 entries on Saturday. Overton turned a fast lap of 15.768 seconds and will start on the pole of the first heat race. Other drivers earning a pole starting spot in one of six heat races: Scott Bloomquist, Josh Richards, Brian Shirley, Billy Moyer Jr., and Brandon Sheppard.

Brandon Overton of Evans, Ga., will be gunning for a Lucas Oil sweep at Golden Isles on Saturday after capturing Friday’s $10,000 opener for the series and Georgia-Florida Speedweeks.

The field of 52 cars will be split into two groups for time trials followed by six heat races with three drivers apiece transferring. The top two from each of two consolation races and two provisional starters will complete the field for the 60-lap main event.

After frequently tardy series champion Scott Bloomquist was late to Friday's event, starting with a series provisional after skipping time trials and his heat race, the Lucas Oil Series today instituted a rule that technical inspection closes 15 minutes prior to drivers' meetings at each series event. Drivers that don't have their cars inspected in that time frame are ineligible for provisionals (drivers can appeal based on proof of repairs because of a breakdown with approval by the top 12 in series points). ... The 52 entries for Saturday’s race is seven more cars than February's highest car count at Golden Isles last season and the most Super Late Models in an event at Brunswick since the 2009’s Speedweeks finale sanctioned by the Southern All Stars, which also drew 52 entries. … New drivers for Saturday night: John Gardner Jr. of Germantown Hills, Ill., and Corey Conley of Wellsburg, W.Va. (Michael Page of Douglasville, Ga., is the only Friday entrant who didn’t return). … Other drivers in the pits with racing equipment who aren’t competing: Pennsylvania drivers Davey Johnson of Latrobe and Jared Miley of South Park, both who are heading for next week’s action at East Bay Raceway Park in Gibsonton, Fla. … Golden Isles race director Ben Sumner told drivers at the pre-race meeting that the track crew hoped to make some changes in providing a better racing surface in Saturday's program. At 5:45 p.m. EST, track crews continued to prep the track, which received more water on Saturday in an effort to provide a better racing surface. They were delayed about 20 minutes as the water truck, a wrecker and two push trucks were briefly stuck at the track entrance in turn four. ... At 5:55 p.m. officials called all cars to the track to help roll in the still muddy surface. Both Lucas Oil series drivers and Southern Thunder series drivers spent more than 20 minutes on the track helping to seal the surface. ... Following a 90-minute delay, Lucas Oil series drivers on track to hot lap at 6:30 p.m. ... On a beautiful day in southern Georgia, fans have turned out in full force, filling the 2,700-plus seating facility at GIS to near capacity. ... Scott Bloomquist's lap of 15.388 seconds was quickest of Saturday's 52 entrants in hot laps.