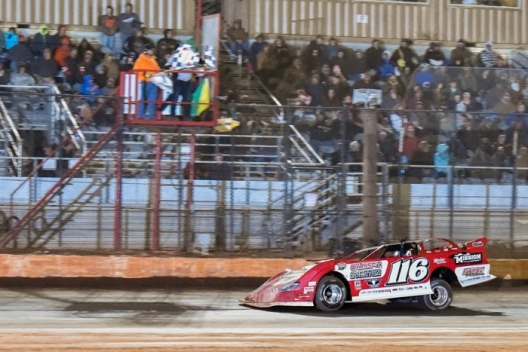 “We’re excited, we’re just ready to race,” Overton said, adding that he was sorry to see Moyer’s demise. “Randy (Weaver) and Chip Stone, they’ve put a heckuva team together with all these boys that help me, Pearl, Josh and Vinny, and all the sponsors and all, I can’t thank them enough. I’m just kind of in a dream driving this thing.

With a clear track in front of him, the home-state driver edged away from a pair of former national touring champions, as former World of Outlaws champ Tim McCreadie, of Watertown, N.Y., and former Lucas Oil Dirt Late Model Series champion Jimmy Owens of Newport, Tenn., finiahed second and third. Brandon Sheppard of New Berlin, Ill., was fourth, while Jonathan Davenport of Blairsville, Ga., rounded out the top five.

Overton, making his sixth start aboard the Dream Team No. 116, since replacing Randy Weaver in November, stalked Moyer from the onset. He started third and quickly put himself in position to claim his second straight $10,000 victory for the Crossville, Tenn.-based team and first ever on the Lucas Oil tour.

Moyer, of Batesville, Ark., led from the onset and appeared to be on the way to his first Lucas Oil victory until radiator damage from contact with the slower car of Scott Bloomquist ended his night and handed Overton the lead.

Early in the race, the polesitting Moyer stayed tucked to the bottom of the high-speed 3/8-mile oval. Moyer caught lapped traffic on lap 12, but managed to maintain his lead over Overton. Four laps later, Moyer was right in Bloomquist’s tire tracks. Despite struggling to find a way around the backmarkers in single-groove conditions, Moyer maintained his advantage and held a .368-second lead at the halfway point.

Moyer continued to roll around the bottom while Overton stayed on his tail, occasionally making a bid for the lead as the pair exited turn two. But while Moyer attempted to fend off the advances of Overton, Bloomquist appeared to slow exiting turn two on lap 37.

Moyer couldn't avoid contact and the resulting damage ended of an otherwise sterling Speedweeks start for the 2013 Lucas Oil Series Rookie of the Year.

After Moyer’s demise, the 25-year-old Overton simply needed to hit his marks to keep McCredie and Owens at bay. He beat McCreadie to the checkers by more than three seconds.

In six starts with his new team, Overton has finished worse than third just one time. He won his most recent outing in the Weaver-prepared machine — the $10,000-to-win Southern Nationals Bonus Series Gobbler — Nov. 19 at Boyd's Speedway in Ringgold, Ga.

After winning his heat and starting sixth in the feature, McCreadie's move to a podium finish was methodical. He initially dropped back to seventh and he rode just outside the top five for the first half of the race. By lap 30 however, McCreadie had cracked the top five. When the caution waved for Bloomquist, McCreadie was already up to third.

“I’m excited for this whole program,” said McCreadie, who is piloting the Longhorn Chassis house car. “I want to thank (South Carolina driver) Chris Madden; he really helped us down here. He actually baselined the car because I couldn’t make it because my wife had surgery. … it’s pretty cool so far. Hopefully we can keep it going.”

It was a good start for Owens, who's hoping for a bounce-back season following a dismal 2016 campaign. He ran as high as second after passing Overton on a lap-six restart. But Overton re-payed the favor two laps later in much the same fashion, getting by Owens on a lap-eight restart.

“We had a good car all night long,” Owen said. “I chose the inside on that last restart when I got to second on the outside. I thought maybe (Overton) just slipped his tires, because the bottom was really good. I think (we) had a bad lane choice there and maybe we could’ve come up a winner, who knows?”

The dominating start by Moyer and convincing win by Overton overshadowed what was supposed to be a showdown between defending series champion Bloomquist and series newcomer Josh Richards.

Bloomquist arrived at the track late and had to take a provisional to start the feature. Richards meanwhile won his heat race and started alongside Moyer on the front row. But the Shinnston, W.Va., driver was never a factor after slipping high in turn one on the opening lap, allowing both Overton and Owens to get by. He settled for a sixth-place finish.

The race was slowed by four cautions. The first came on lap six when Bloomquist and Dennis Erb Jr. tangled in turn four. Another yellow flag waved two laps later for Don O'Neal, who spun on the backstretch. Bloomquist brought out the third caution after the contact from Moyer on lap 37. The final caution came with six laps remaining as Tyler Erb stopped at the track exit in turn two attempting to pull into the pit area.

Frank Heckenast Jr. led all 12 laps from the pole, pulling away from Kenny Pettyjohn by as much as three seconds to win the final consolation race. Pettyjohn held off a last-lap charge from Greg Satterlee to earn the last transfer spot. Satterlee fell one spot short after getting by Dennis Erb Jr. for the third spot midway through the race. The race was slowed by a pair of cautions, the first for Austin Rettig who looped his car on the back stretch. On lap three, Shane Tankersley and Joey Coulter got together exiting turn two to draw the second caution.

Polesitter Rick Eckert led all 12 laps of the first consy to transfer to the main event along with G.R. Smith. Eighth-starting Earl Pearson Jr. made a late charge on the high side in a bid for second but settled for third followed by Doug Drown and Donald Bradsher. A lap-seven caution appeared for Ricky Weiss. Reigning series champ Scott Bloomquist, who skipped time trials and his heat race, started on the rear and briefly tuned up for his provisional starting spot in the feature.

Tim McCreadie powered into the lead from the high side at the start and steadily pulled away from polesitter Boom Briggs, who fought off an early challenge from Tyler Erb. Erb stayed just in front of a hard-charging Gregg Satterlee to claim the final transer spot.

Polesitter Darrell Lanigan, sporting the new No. 14 of his car owner Clint Bowyer, emerged from a tight first-lap pack to grab a 10-lap vicotry over third-starting Ross Bailes, who never let the leader get too far out of his sights. Outside front-row starter Ryan King got the third and final transfer spot after holding off sixth-starting Kenny Pettyjohn. Fourth-starting Hudson O’Neal got shuffled back on the start and finished seventh.

Josh Richards drove by polesitter Donald McIntosh on the second lap and pulled away for a convincing win in the fourth heat. Richards won by 5.6 seconds over McIntosh. Jason Fitzgerald rallied from the third row to grab the final transfer spot. Second-row starters Joey Coulter and Brett Hamm slipped back early in the caution-free heat.

Outside front-row starter Jimmy Owens ducked under Devin Moran exiting turn four on the third lap and cruised to a 10-lap victory. Moran, making his debut with Tye Twarog’s team, kept Casey Roberts in check the rest of the way as the top three transferred to the main event. G.R. Smith was a distant fourth in the caution-free affair.

Brandon Overton won the second heat ahead of Brandon Sheppard and Brent Larson. A caution waved on lap four when Ricky Weiss and Earl Pearson Jr. spun in turn three after a side-by-side battle for the lead.

Polesitter Billy Moyer Jr. fought off challenges from fellow front-row starter Jonathan Davenport to win the first heat and grab the pole for the 50-lap feature. Davenport, who nearly pulled alongside Moyer a few times, finished second with fifth-starting Don O'Neal getting the third transfer spot in the caution-free prelim.

Billy Moyer Jr. of Batesville, Ark., topped 51 drivers in qualifying for Friday's Lucas Oil Series season opener and will start on the pole of the first heat race. Other drivers starting on the pole of their respective heats are Donald McIntosh, Brandon Sheppard, Darrell Lanigan, Devin Moran and Boom Briggs.

Last year’s Super Bowl of Racing winners — Jonathan Davenport of Blairsville, Ga., and Josh Richards of Shinnston, W.Va., a two-race winner — are among expected drivers as the national tour opens its season at Golden Isles for the fourth consecutive season, but both are driving for different teams.

Davenport, who drove for K&L Rumley Enterprises last season, is piloting the Barry Wright house car in ’17 while Richards has moved to the Ohio-based Best Performance Motorsports team after departing his father’s Rocket Chassis house car.

The field will be split into two groups for time trials followed by six heat races with three drivers apiece transferring. The top two from each of two consolation races and two provisional starters will complete the field for the 50-lap main event.

Reigning series champion Scott Bloomquist arrived after a dozen drivers had qualified. ... Both drivers in Arnie Ranta-sponsored cars had problems in hot laps. Brian Shirley slowed with engine woes and he's done for the night. Brent Larson hit the inside berm and was sent into the turn-two wall, virtually knocking off his nosepiece; he's switching to a backup car. … Brian Conner of Augusta, Ga., broke an axle tube and scratched for the weekend. ... Golden Isles has made improvements since last year’s Super Bowl including increasing seating capacity to 2,700 by adding tower grandstands that were previously used at Daytona International Speedway. … Friday's general admission is $10. … Teams must use uncut right-rear tires; no grooving or siping of right-rear rubber is allowed.