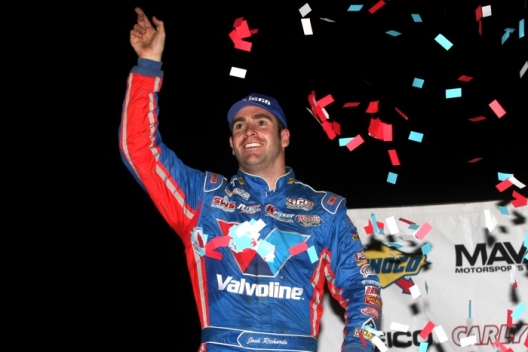 “Last year we had a fast car but we got too tight late in the race,” said Richards, who finished sixth in the ’15 Pittsburgher 100 after leading early. “I wrote that in my notes and just kind of took that into consideration that it was probably gonna happen again, so we just left the car a certain direction so we could steer the last 20 or 30 laps. I think it probably helped us stay up front rather than fall off like we did last year.”

Richards steered his father Mark’s Rocket Chassis house car to a convincing victory, racing unchallenged at the front of the pack after grabbing the lead from polesitter and race-long pacesetter Michael Norris of Sarver, Pa., on lap 25. He led by as much as a straightaway throughout most of the 62-lap stretch of uninterrupted green-flag racing that closed the feature, though defending race champion Scott Bloomquist of Mooresburg, Tenn., did close the gap to about 10 car lengths with just over 10 circuits remaining before Richards pulled away slightly in the final laps to triumph by 1.864 seconds over the 52-year-old Hall of Famer.

Two-time Pittsburgher winner Gregg Satterlee of Indiana, Pa., finished a distant third, ending the race nearly a half-lap behind Richards after making a solid advance forward from the 14th starting spot. Don O’Neal of Martinsville, Ind., settled for a fourth-place finish after running second through the race’s middle stages and ninth-starter Jimmy Owens of Newport, Tenn., completed the top five.

Sixth-place finisher Dennis Erb Jr. of Carpentersville, Ill., was the last driver on the lead lap at the checkered flag, while the 24-year-old Norris faded from contention and finished one lap down in 10th after setting a new track record in time trials, winning a heat race and leading the A-Main’s first 24 circuits.

Richards was victorious in the Pittsburgher for the second time in his career. His first success, however, came in a 50-lap event in 2007 that was sanctioned by the World of Outlaws Craftsman Late Model Series.

Putting a long-distance Pittsburgher on his resume was satisfying for Richards, who once again flashed his maturity behind the wheel on his way to the third 100-lap victory of his spectacular 27-win 2016 campaign.

“We wanted to come here and try to win a 100-lap Pittsburgher,” said Richards, who ran the third race of his career at PPMS in 2004 and counts the sprawling half-mile oval as his favorite track. “We were able to get it done.”

Richards, who started third, rode calmly in second place behind Norris during the feature’s early stages, flashing the patience that has increasingly made him a threat in century grinds.

“Norris was really fast earlier and I just tried to pace myself behind him and move around to see what we had,” Richards commented. “We were just running the top, trying to keep our momentum up. I tried to follow Norris and let him get out a little bit, and then we were able to get back to him. I just wanted to move around and see where the speed was, because when you’re out front it’s kind of hard to tell sometimes.”

Richards dominated the action after seizing command on lap 25, easily pulling away on five restarts that occurred between laps 26 and 38. But after Bloomquist, who started 10th, reached second place with a lap-61 pass of O’Neal and sliced Richards’s straightaway edge by more than half at the lap-80 mark, Richards’s romp to victory lane appeared to be in a precarious position.

Even Richards realized that he couldn’t walk through the final circuits.

“We gambled a little bit on tire,” said Richards, who opted to use softer-compound rubber than the pursuing Bloomquist. “The car was really good, and then the last 20, 25 laps, it started to give up some (as the tires wore), so I had to move around and really search to find some grip.

“The last 15, 20 laps, (the track) changed a lot. The top would be good for one lap, and then it would just completely go away and you’d be loose and tight and everything else. So I just tried to catch the brown on the bottom (lane) and get a run … but if you caught it too early you’d push up out of it on exit.

“I hit it one lap and would just miss it a little bit the next lap, and I finally got a little bit of rhythm down and found some speed at the end to try and get back away,” he added. “I saw Scott was second and I knew he was harder on tire and he’d be coming.”

The victory gave Richards, the soon-to-be 2016 WoO champion, the week’s bragging rights over Bloomquist, who entered the event having already clinched his third career Lucas Oil Series title. Richards understood the possibility was good that the race would come down to him and Bloomquist.

“We’ve both had great years, and I think he’s won this race five or six times,” Richards said of Bloomquist . “We wanted to come and try to win it for the second time, and we knew he’d be the guy to beat.”

Bloomquist conceded that Richards did what he needed to do to come out on top of the latest showdown between the season’s national touring stars.

“He ran a softer right-rear tire than the rest of the front bunch,” Bloomquist said of Richards. “All of us had a (harder Hoosier LM) 40 on, and I didn’t think (the softer tire) would stay under him the whole race .. but it obviously did.

“We made enough laps that we made up some distance (on Richards), but just didn’t quite have enough. We needed another 20.

“Our right-rear was finally getting going,” he added. “We were definitely at a deficit early … the tire selection was definitely gonna make him better early. I just didn’t think it would hang on late, but there was enough mud around the bottom and he could get down into that and keep his tires cooled off. He ran a good race.”

The 32-year-old Satterlee, meanwhile, babied his machine to the finish line on a softer tire like Richards utilized.

“I really felt like the last 15 laps I was just kind of hanging on,” Satterlee said. “I think it there would’ve been a caution I think Scott might’ve been going to the front … I just know he had a harder tire on and Josh said he kind of started to fade there at the end.

“I was OK, but I just got to where I couldn’t lap any cars and I couldn’t see those (top two) guys, so I just thought I was gonna probably get passed. But I think everybody who had a 14-and-a-quarter (1425-compound tire) on was just cruising at the end. We couldn’t make any gains on anybody, but we’re happy with a third after starting 14th.”

Six caution flags dotted the race, all for slowed or stopped cars. Mason Zeigler of Chalk Hill, Pa., brought out the first yellow flag on lap eighth when he fell off the pace with a blown right-rear tire. Other drivers who triggered caution conditions included Brandon Sheppard of New Berlin, Ill., whose car lost power due to a dead battery after he advanced from the 16th starting spot to sixth place (he lost six laps replacing the battery); Rick Eckert of York, Pa., who developed a left-front flat tire on lap 28; Dylan Yoder of Selinsgrove, Pa., whose car was towed off the track on lap 31; and Keith Barbara of South Park, Pa., who slowed on lap 35 and retired from further action.

Notes: Richards recorded his sixth Lucas Oil Series triumph of 2016 and the 12th of his career. … Tim McCreadie of Watertown, N.Y., ran as high as third during the race’s first half, but his car’s handling became tighter during the long green-flag period that closed the race and he finished one lap down in seventh place. … Earl Pearson Jr. of Jacksonville, Fla., started on the outside pole and ran in the top five until being shuffled backward on a lap-28 restart. He finished a quiet eighth, one lap down at the checkered flag. … Jonathan Davenport of Blairsville, Ga., was never a factor. He went down a lap on the 65th circuit and finished 12th. … Provisional starting spots went to Colton Flinner of Allison Park, Pa. (Lucas Oil points), John Mollick of Toronto, Pa. (fast time), Jason Covert of York Haven, Pa. (highest-finishing regional driver in a B-Main) and Brandon Burgoon of McDonald, Pa. (highest finishing Rocket Chassis driver in a B-Main). The provisionals claimed by Covert and Burgoon were sponsored by W.G. Satterlee & Sons Petroleum and Mark Richards Racing. ... Light-but-steady rain washed out Friday's qualifying program after just two groups of hot laps were completed, setting up a one-day Pittsburgher 100 on Saturday that began with hot laps at 4 p.m. ... Jared Hawkins of Fairmont, W.Va., was the only new entry for Saturday's action. He tagged the back of the second qualifying group and didn't transfer to the feature.

The local boys made good in Pittsburgher 100 qualifying as Michael Norris of Sarver, Pa., and John Mollick of Toronto, Pa. — two drivers who are familiar faces to PPMS fans — topped their respective time-trial groups.

Norris's lap of 17.106 seconds in the first group was the overall fastest of the 45-car qualifying session and also established a new track record. The 24-year-old registered his first-ever Lucas Oil Series fast-time honor one month after turning heads when he clicked off the quickest lap on the opening night of the World 100 weekend at Eldora Speedway in Rossburg, Ohio.

Mollick, meanwhile, turned a lap of 17.746 seconds to lead the pack in the second qualifying group.

Norris, Mollick, Josh Richards of Shinnston, W.Va., and Tim McCreadie of Watertown, N.Y., will start from the pole position in the four 10-lap heat races.