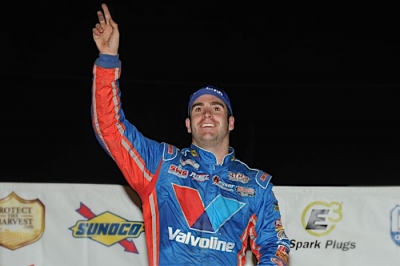 IMPERIAL, Pa. (Oct. 8) — Josh Richards is the rare Dirt Late Model driver who has become a superstar without ever racing regularly at a single track during his rise through the ranks.

That doesn’t mean the 28-year-old sensation from Shinnston, W.Va., is without a facility he can generally call home, though — and Saturday he celebrated in victory lane at the place dearest to his heart. | RaceWire

Richards rolled to a convincing $20,000 triumph in the 28th annual Pittsburgher 100 at Pittsburgh’s Pennsylvania Motor Speedway, the sprawling half-mile oval that’s the closest thing to being his turf that he has.

“This was the first place he should’ve won (a feature) at,” Richards’s father and car owner, Mark, said of his son’s PPMS history. “He blew a tire out on the last lap leading (a weekly event) in 2004 (as a 16-year-old rookie). That was only the third race we’d been to with him.

“It’s been a little bit of a local track to us,” Mark continued. “It’s only an hour-and-a-half from the shop, and back when he first started (racing) I knew it was a big track that would be good for him to learn to race on so we came here that first year probably eight to 10 times. If we’ve ever had a home track, this was probably it.”

Ask Josh about PPMS and he leaves no doubt that he would have no problem listing it as his “home” speedway.

“I love this place,” Josh said after swapping his uniform for street clothes — and getting his truck and camper pulled out of a muddy spot in the parking lot off the backstretch by fellow racer Jason Covert of York Haven, Pa. — following the 100-lap feature. “It’s by far my favorite track.”

Stretching back to his visits to PPMS as a young boy, there was just something about the track that excited him.

As a kid, Josh posed for victory lane pictures at PPMS with his father, who won the Pittsburgher with Tim Hitt, Davey Johnson and Bart Hartman before Josh took over the Rocket house car’s reins. When Josh captured the track’s marquee event himself for the first time in 2007, he became even more enamored with a “special place” that fires him up every time he steps on the gas there.

“It’s so unique,” Josh said of PPMS. “There’s not one track that’s even anywhere close to how you drive this place. It’s just so momentum-based, and the groove moves around so much. They do a great job preparing the track so it’s a lot of fun.

“I think racing here is more sentimental than anything, but it’s also really fun to race at.”

And it’s downright thrilling, of course, to win there like Josh did on Saturday night. He dominated the century grind after grabbing the lead from Michael Norris of Sarver, Pa., on lap 25, building as much as a straightaway edge before beating Scott Bloomquist of Mooresburg, Tenn., to the finish line by about a half-straightaway margin.

Richards’s second career Pittsburgher win was the 26th overall Super Late Model checkered flag of his spectacular 2016 campaign, which he will top off by claiming his fourth World of Outlaws Craftsman Late Model Series championship. He has other major, big-money triumphs on his ’16 list of successes — including the $50,000 USA Nationals and $27,000 Prairie Dirt Classic — but the Pittsburgher took a back seat to none of them.

There was plenty of emotion involved with Richards’s victory, most notably because a man very close to Mark and Josh Richards — long-time shock representative Mike Farr — died at the age of 65 on Friday night.

“It means a lot to win this race, especially with what happened with Mike Farr passing away last night,” Mark Richards said. “I told Josh, ‘I felt like we won this for him,’ because he was Josh’s first (marketing) manager and we had a really close relationship. It wasn’t good news this morning when I woke up, so I’m glad we were able to win one for him tonight.”

Gregg Satterlee of Indiana, Pa., is a two-time Pittsburgher winner, but his third-place finish in Saturday night’s 100-lapper excited him nearly as much as his victories.

“We’ve run well here, but this is definitely the best I’ve been against a Lucas Oil (level) field of cars in this race,” said Satterlee, who previously won the Pittsburgher in 2012 and 2014 when it carried regional-series sanction and wasn’t a 100-lap event. “We’re very, very happy with how things went.”

The 32-year-old driver was one of the race’s biggest movers, advancing from the 14th starting spot to finish behind two of the sport’s 2016 titans in his XR1 Rocket Chassis. He finally gained control of third place on lap 75 when he overtook Don O’Neal of Martinsville, Ind., though he crossed the finish line nearly a half-lap behind Richards at the end of the 62-lap green-flag stretch that closed the race.

“I could really get stuck on the bottom (lane) really good,” Satterlee said. “A lot of guys were either missing it or just couldn’t stay down there as well as I could. I could really get into that traction and pick two or three off, and we had two or three cautions in a row (between laps 26 and 38) and I was able to get (Jimmy) Owens and (Earl) Pearson (Jr.) and some cars that would’ve been real hard to pass racing.

“I just really couldn’t go very hard anymore (late in the race),” he added. “I was following Scott’s orange spoiler (Bloomquist) and I think he had a harder right-rear tire on. When that fired off he kind of checked out there at the end.”

Satterlee, whose third-place outing continued a string of strong performances since Labor Day weekend (two victories at Dog Hollow Speedway in Strongstown, Pa., and one at Pennsylvania’s Port Royal Speedway), hailed PPMS and the rebirth of the track’s season-ending event.

“It’s an awesome track … it’s so big and so wide,” said Satterlee, heading to Winchester (Va.) on Sunday to post a runner-up finish in a $5,000-to-win event. “You definitely got to give the track credit (for preparing a racy surface). It’s great to get to come here and race on a track like this — and they finally built the Pittsburgher back up to what it was back in the day with some money in it.”

Scott Bloomquist didn’t have any arrival issues to PPMS — he was at the track before hot laps for Friday night’s rain-doomed qualifying program — but he and his crew had to do some scrambling nonetheless.

The five-time Pittsburgher winner and 2016 Lucas Oil Series champion experienced some problems during his heat race on Saturday evening. He caught a hole in the track wrong while running second late in his 10-lap prelim and had repairs to make after settling for a third-place finish.

“There’s a real bad dip going in (turn) three,” Bloomquist said after registering a runner-up finish in the 100-lap feature. “I knew it was there, and I underestimated how big a dip it was. I went in and I hit it, and the car bottomed out. It bottomed out so hard it flexed the side mounts on the engine, which allowed the fan to go down and tap the shroud, which broke the fan blade off … a couple of them off. Then, the out-of-balance of that broke the water pump nose off.

“At least it was just the heat race and I didn’t hit it again in the feature. We made it 50 laps (in his Labor Day weekend Hillbilly 100 win at Tyler County Speedway in Middlebourne, W.Va.) without water which was unbelievable, so I knew we could make it a few laps of that heat race.”

O’Neal just off the mark

After a fourth-place finish in the Pittsburgher 100, Don O’Neal continued his newfound love for PPMS.

“Back several years ago when we used to come here it was one lane around the bottom,” said O’Neal, who finished third in the 2015 Pittsburgher. “But the last two years now, man, you could run anywhere on it. I really enjoy this place. It’s a fun place.”

The 52-year-old O’Neal started fifth in his Clint Bowyer Racing Club 29 Race Car and climbed up to second place by lap 26. He ultimately lost the runner-up spot to Bloomquist on lap 61 and third to Satterlee on lap 75, leaving him to settle for a finish just off the podium.

“We was good early, and then sort of halfway through we just sort of leveled out and then started slowing down a little bit,” said O’Neal, who remains winless on the Lucas Oil Series since his victory on April 24, 2015, at Roaring Knob Motorsports Complex in Markleysburg, Pa. “I don’t know … we just gotta work a little harder and get a little better at the end of these races.

“The 25 car (Mason Zeigler) stuck me in the fence there on the first lap and I lost several spots and dug back to second, and I thought maybe we had a shot … but it just wasn’t meant to be tonight.”