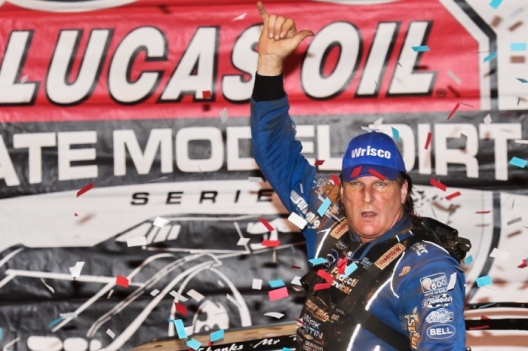 On Friday night, he was one spot better. Charging to the front of the field at the drop of the green flag, the Hall of Famer led all 50 laps, capturing his 11th Lucas Oil Late Model Dirt Series victory of season for a $10,000 payday.

“The car was just about as good as you could ask for,” Bloomquist said in victory lane. "If I could go in and do some work on the car, dial it, I don’t know what I’d change.”

Starting on the pole, Bloomquist dominated the 25-car field, never facing a serious challenge for the lead as he navigated through heavy lapped traffic. The Lucas Oil points leader praised the racetrack, which underwent a change in promoters earlier this season. New clay was recently added to the 3/8-mile oval as a part of speedway renovations.

“It really helped the racetrack a lot,” Bloomquist said. "Used to, you’d pretty much have to marry the wall in (turns) three and four, and you could race all over it tonight. You could run the bottom, middle, top … it’s really been a big improvement. I really enjoyed racing here tonight.”

While Bloomquist cruised over the field, a tight battle ensued for the runner-up spot, with Tim McCreadie of Watertown, N.Y., outrunning Dennis Erb Jr. of Carpentersville, Ill., at the checkers. Greg Johnson of Bedford, Ind., ran fourth, with Don O’Neal of Martinsville, Ind., pulling ahead of Mike Marlar of Winfield, Tenn., on a late-race restart to round out the top five.

“I went harder on the right-rear than (Bloomquist) did,” McCreadie said. "I didn’t want to see any yellows, to be honest with you. I know the first run, he got away from all of us. But I think it would have equalized. The yellows, they help. But he had the best car all night.

Erb, who has only made a couple of appearances at the central Kentucky oval, was pleased with his team’s improvements and a third-place finish.

“It was a lot better than what we were the first time here,” Erb said. "It was good to battle up front there. The car just got a little loose there at the end. But to come home third, I’m happy with that.”

Notes: The first yellow flag waved on lap 22 when fourth-running Jimmy Owens slowed on the frontstretch. ... Josh Rice drew a caution on lap 28 when he slowed in turn one. ... A yellow flag flew on lap 40 when fifth-running Jared Hawkins lost a wheel; he was piloting the Eric Hudkins-owned No. 1 that was driven earlier this season by Paul Wilmoth Jr. and Mike Benedum. ... The final caution fell on lap 45. ... Mike Marlar won the past two John Bradshaw Memorial events; he finished sixth. ... Jason Jameson posted a top-10 finish behind the wheel of Justin Rattliff's No. 16.