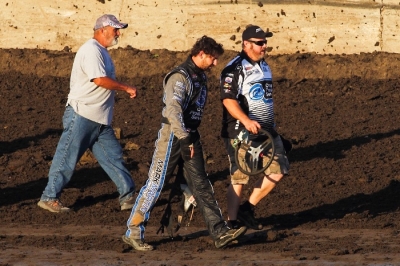 While the 34-year-old driver from Batesville, Ark., wasn’t cleared to immediately resume racing, he learned that his breakthrough 2016 season might not be over as feared due to the torn carotid artery he was found to have suffered in a violent series of flips during qualifying for the July 15 Lucas Oil Late Model Dirt Series event at Tri-City Speedway in Granite City, Ill.

“We got better news,” Landers’s father and team owner, Lance, said on Monday night. “They basically told us somewhat of the same (the carotid artery problem remains), but we were really concerned we were gonna have to do surgery and they think that we can dodge that and this thing may heal itself.

“We are definitely going to be parked for a day or two, though. They said, ‘We’re gonna hold him out of the car for six weeks and monitor what’s going on,’ but I’m gonna take him back in three weeks (for more testing) and maybe, with the healing process that they’re seeing now, we possibly could make Knoxville next month (the Sept. 15-17 Lucas Oil-sanctioned Nationals at Iowa’s Knoxville Raceway that Landers won last year).

“Coming back for Knoxville is our best-cast scenario,” he added. “It just depends on how the healing process goes.”

With last weekend’s Topless 100 at Landers’s hometown Batesville Motor Speedway canceled by rain before Landers’s indefinite sidelining was announced last Friday, he’s yet to miss a Lucas Oil Series race and ranks third in the national tour’s points standings. His diagnosis makes it likely that he will be sidelined for at least the next five series events — this weekend at Ponderosa Speedway in Junction City, Ky., and Lawrenceburg (Ind.) Speedway and the Labor Day weekend tripleheader in Ohio and West Virginia — as well as the Sept. 8-10 UMP DIRTcar-sanctioned World 100 at Eldora Speedway in Rossburg, Ohio.

“We hate losing these points,” said Lance Landers, whose son is enjoying his best campaign since entering the Dirt Late Model ranks full time in 2011. “We were hoping we might get to the second spot (in the points standings) if we just kept getting better, but then something like this happens. Now we’re just hoping we can still finish in the top six or seven (with help from the 75 hardship points he’s eligible to receive for every missed race), but we’re excited about hopefully getting back in the car before the end of the year.

“Jared is chomping at the bit to get racing again,” he continued. “Jared’s at home kind of in deep depression. He’s saying, ‘Man, I feel good. I’m OK. Why am I parked? Why can’t I get in the car?’ Well, we’re parked because we’ve got to be parked.”

Indeed, the risk to Landers’s health — his life, more specifically — is too great for him to make a hasty return to the cockpit. He’s extremely fortunate, in fact, that he avoided further complications in eight nights of competition (including six feature starts) he put in following his frightening wreck.

Lance Landers said his son’s carotid artery, which supplies oxygenated blood to the head and neck, could rupture with the least amount of pressure. “Any bump in that neck, something hitting him in that neck just right, could cause a blood clot,” he noted. “It’s really treacherous with that tear in the artery.”

According to his father, Jared was told not to race — and be careful in his daily activity — because if he “twists his neck wrong or something isn’t right, it could cause a stroke or kill him.”

Lance Landers paused. He thought back to his son’s high-flying wreck at Tri-City and acknowledged how death-defying it truly was.

“It’s probably a miracle we didn’t have a major problem at that accident,” Lance said. “If I’d have known we’d had that much damage, we would’ve never been in the race car after that night.”

Jared actually walked away from the crash scene at Tri-City, shaken and sore but otherwise seemingly uninjured. He even jumped into his second car, took a provisional starting spot and advanced from the back of the pack to finish eighth in the 50-lap feature — a run that was unexpected to his father, who wanted Jared to simply start the race for points and then visit a nearby hospital for a checkup.

“I didn’t know he was racing,” Lance said. “We were gonna make two laps and pull in. I was outside on the rollback loading the (wrecked) car and I got to looking at my phone (the Race Monitor app) to see where everyone was running and I noticed he was in eighth, and I said, ‘Oh, man.’ ”

Lance took Jared to an emergency room for evaluation after the evening of action at Tri-City. CAT scans and other tests revealed no serious problems and he didn’t exhibit concussion symptoms, so he raced the following night at Lucas Oil Speedway in Wheatland, Mo., and promptly won the 60-lap Diamond Nationals. Jared visited a doctor again three days later because he said his neck was swollen and he “couldn’t swallow,” but an issue with the carotid artery wasn’t immediately identified and he went on to enter subsequent Lucas Oil Series events on July 22-23 at I-80 Speedway in Greenwood, Neb. (finished eighth), July 26 at Macon (Ill.) Speedway (ninth) and Aug. 11-13 at Florence Speedway in Union, Ky. (fifth in Latham Memorial, 12th in North-South 100).

Further study of Jared’s test results — notably nodules related to his thyroid — led doctors to notice a possible issue with the carotid artery in his neck. Lance contacted his friend, Dr. Bruce Murphy, who owns the Arkansas Heart Hospital in Little Rock, and scheduled a Thursday appointment with a cardiologist for Jared. After a test involving dye and a CT scan, the torn carotid artery was discovered.

Lance related that he and Jared were told that the carotid artery has “four layers” of skin/tissue and three of Jared’s were torn or stretched, apparently from part of the HANS head-and-neck restraint device that Jared wears over his shoulders contacting his neck as Jared’s head was jostled in the midst of his car’s wild flips. Lance said it wasn’t a defect in the device but rather a problem similar to injuries that sometimes occur in passenger car accidents from seatbelts digging into a person’s neck.

“They said it was just the HANS pushed into his neck,” Lance said. “The surgeons that were there looking at him said they’d had two other people that had been in there with the same injury. I guess it just pushed in on his neck and pushed that artery to the point it stretched it and tore it.”

The initial determination of the severity of Jared’s injury was chilling.

“They said, ‘Hey, it’s not good and he’s done. He won’t race this year and maybe not next year,’ ” Lance said. “They scared us to death there. I was scared about him needing surgery or a stent.”

On Monday, however, Jared returned to the Arkansas Heart Hospital for another evaluation with his primary physician, Dr. Vasili Lendel, and four surgeons and received more positive news.

“We got our first glimmer of hope tonight that everything might be OK,” Lance said. “They said the healing process was good … they noticed that (the skin/tissue) was healing because the blood was pushing those back to where they’re supposed to be. They said they’d like to hold him out for six more weeks and make sure, but I asked them to do a CT scan in three weeks and that’s gonna tell us more about how the healing process is going.”

Lance is hopeful that Jared’s next examination will yield the results that allow the hard-charging racer to continue his 2016 racing season, which has been nothing if not eventful. He’s enjoyed more Dirt Late Model success than ever before (including two Lucas Oil Series victories and a Dream preliminary triumph at Eldora) but also some frustrating disappointments (for instance, incidents while running up front in several Lucas Oil events) and painful moments. In fact, when Jared flipped for the first time in his Dirt Late Model career at Tri-City, he was already racing with a brace on his right hand because he broke his middle finger in a tangle of his doing on the final lap of June’s Dream (he admittedly attempted to take out eventual runner-up Josh Richards of Shinnston, W.Va., while being lapped) and underwent surgery to repair the injury just over one week later.

“We’ve had our ups and downs,” Lance said. “But he’s done a great job. His (Sweet-Bloomquist) car has been great and he’s really come along. And on top of that, this CPS (Crop Production Services) sponsorship has been tremendous and supported us so much. Steve Martin (of CPS) has actually been with me all weekend because Batesville (the Topless 100) rained out, and he’s like, ‘Man, I’m just proud that we’re doing what we’re doing. However long it takes to get Jared back racing, I’m behind you.’

“We are definitely coming back,” he added. “It might not be as fast as Jared would like … he has a high tolerance for pain and don’t complain much, so he’s thinking he can convince these doctors he’s fine (but) I’m not going to let him do that. We’re just gonna make sure that we’re healed up. If we’re not healed up enough to get to Knoxville, then we’re just not healed up. But we’re definitely not quitting. We’re gonna ride this thing out and see what we’ve got. We’ve got a little delay here, but we’re gonna keep digging.”

“We got our first glimmer of hope (Monday) that everything might be OK. They said the healing process was good … they noticed that (tissue) was healing because the blood was pushing those back to where they’re supposed to be. They said they’d like to hold him out for six more weeks and make sure, but I asked them to do a CT scan in three weeks and that’s gonna tell us more about how the healing process is going.”