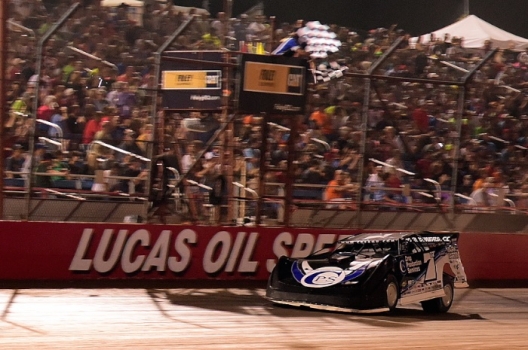 WHEATLAND, Mo. (July 16) — What a difference 24 hours made for Jared Landers of Batesville, Ark.

One night after destroying his brand-new car in a wild, end-over-end flip, Landers rebounded to pick up a huge victory in front of a big crowd at Lucas Oil Speedway.

Landers, 34, took the lead from Tim McCreadie of Watertown, N.Y., on lap 13 and never relinquished it. He crossed the finish ahead of Newport, Tenn.’s Jimmy Owens — just falling short of his fourth Diamond Nationals triumph — while defending Lucas Oil Series champion Jonathan Davenport of Blairsville, Ga., was third.

Owens and Davenport are the last two winners of Lucas Oil Speedway’s Show-Me 100, adding more cachet to Landers’s performance. It was also Landers’s second Lucas Oil Late Model Dirt Series victory of the season — the other came May 27 at Wheatland in the Don and Billie Gibson Memorial on the Show-Me 100 undercard — and the sixth of his career.

Lander’s latest checkered flag — in a race co-sanctioned by the Lucas Oil MLRA — came in his backup car after he flipped his Sweet-Bloomquist Race Car in qualifying on Friday at Tri-City Speedway in Granite City, Ill.

Landers held off Owens in a three-lap shootout at the finish following the race’s fourth caution, on lap 57. Owens was unable to duplicate his Show-Me 100 victory earlier this year at Lucas Oil Speedway.

“My crew worked their butts off,” Landers said of getting the car ready. “I put them through torture. That car we crashed was brand new. This is a reward for them guys. They deserve it more than I do.”

With a rough area on the 3/8-mile oval in turn two, Landers said it was imperative not to “mess up” near the finish as Owens, Davenport and Lucas Oil Series points leader Scott Bloomquist of Mooresburg, Tenn., gave chase.

Bloomquist restarted third on the final green but faded to fifth in the official rundown behind fourth-place finisher Tim McCreadie of Watertown, N.Y. Davenport slid past both and into third over the last three laps.

Landers said he was driving with a sore right hand after the Friday crash, making it difficult to hang onto the steering wheel at times as the car hit bumps.

“I knew Jimmy and Scott behind me were waiting for me to mess up and pass me and take advantage of a rough race track," said Landers, who wore a padded brace on his right hand to protect a broken finger. “It’s awesome to out-run these guys. Last time we won here it wasn’t a points night. We’ve been needing one. This is awesome.”

Owens noted his best hope was for Landers “to jump the cushion a little higher and mess up a little worse than me. But every time he did, I did. Jared got to where he was pushing and I was pushing. He got us tonight."

“We had a really good hot rod tonight. Our hats are off to Jared and his crew, they did a great job tonight,” Owens added. “Coming back to win tonight after what happened to him last night says a lot about them.”

Davenport, who hasn't won since May, said his finish was encouraging. He started from the fourth row and rallied after falling as far back as ninth.

“We haven’t run good in a long time,” Davenport said. “We’re working on this thing and getting better. We snuck up through there. It almost feels like a win. We haven’t been up there in a while.”

Brandon Sheppard of New Berlin, Ill., started from the pole position and led the race’s first but faded to a sixth-place finish.