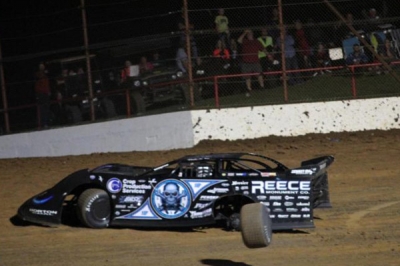 Conventional wisdom finds even the best Dirt Late Model drivers slowing down when they pass the half-century mark in age. But Scott Bloomquist never has been conventional.

Indeed, the 52-year-old Bloomquist seemingly has never been faster. The Hall of Famer with more than 550 career victories is leading the Lucas Oil Late Model Dirt Series by a healthy 245 points over Jonathan Davenport after reeling off three straight July victories.

Bloomquist has eight series wins in 2016, is on track for his first Lucas championship since 2010 and ranks No. 1 in the DirtonDirt.com weekly poll. So is he driving better than ever?

"I think I am," Bloomquist said earlier this week in a phone interview from his Mooresburg, Tenn., race shop in preparation for a two-race Lucas Oil Late Model Dirt Series swing this weekend.

Bloomquist and his iconic No. 0 car will be looking to bust a lengthy drought at Lucas Oil Speedway on Saturday at the 10th annual CMH Diamond Nationals. On Friday, the series stops at Tri-City Speedway in Granite City, Ill.

"I'm driving smart still," Bloomquist said, explaining that a well-prepared race car — as his Sweet-Bloomquist machine has been much of the season — means everything to a driver's confidence and performance.

"When your car is throwing you surprises and not quite doing things the way you want, or if you get in track conditions that are rough and the car is erratic ... it makes your confidence not where you would like it to be. And for good reason," he added. "Your comfort zone is extremely important in a race car when it comes to having confidence in your ability."

Preparing the race car to that high level doesn't come without a price. Asked the key to his 2016 success, Bloomquist laughed and said it's a little surprising all things considered.

He called it "the most hectic year I've probably ever had," mentioning multiple events in which he's pulled into the pits late. At times, he's even missed time trials all together.

"We've missed practices and in some of them missed qualifying and found ourselves having to dig out of a hole," Bloomquist said. "We've just had so much going on here in the shop. We've been working on things to try and get better all the time and it just takes up time. Then the next thing you know, you're scrambling."

Asked if his on-track success is surprising, in light of often being in scramble mode, and Bloomquist said, "to some degree."

"But I'm not really surprised because we make sure we don't leave until we know we're ready. It's not like we're just throwing stuff in the box and heading down the road to the next race. We're spending the amount of time that the cars need spent on them."

Thought and preparation is more important in today's Dirt Late Model world than ever before, he said. Bloomquist admits it's trying on his patience at times.

"The weeks are shorter," he said. "The amount of energy it takes, for some reason, it's taking a lot more time than it used to. I don't think it's anything to do with age. Maybe I'm just a little more hard-headed about the level I'll accept."

But if all is done correctly, the driving part seems almost easy most nights.

"Driving the race car is absolutely the most simple part," he said. "I know what my job is to do then. I've done it for so long that if the car is right, that part of the job is easy."

The cars obviously are performing. Veteran driver Dale McDowell of Chickamauga, Ga., won his first time out in a Sweet-Bloomquist car Saturday at Smoky Mountain Speedway in Maryville, Tenn. The only three Sweet-Bloomquist cars in the field finished 1-2-3 with Jared Landers and Bloomquist following McDowell across the finish line.

The addition of the smooth McDowell with the aggressive Landers gives Bloomquist additional, valuable feedback.

"We had been communicating a little bit and look forward to communicating more," Bloomquist said of McDowell. "Me and Landers have communicated well since we got together and it's been good. He has a little different style than I do and seeing him have success with that driving style ... maybe it shows I was being a little too conservative before and I maybe I needed to be driving this thing harder.”

There was no denying how hard Bloomquist was driving in his last visit to Lucas Oil Speedway. He was charging hard when a left rear wheel broke off seconds after taking the lead on lap 89 of the Show-Me 100 on May 28. Despite having to pit, Bloomquist still rallied for a close second to Jimmy Owens.

"We needed another five laps," Bloomquist said. "I definitely was on a mission to win that race."

As he will be Saturday in attempting to win at Lucas for the first time since capturing the 2011 Diamond Nationals.

"We've missed practices and in some of them missed qualifying and found ourselves having to dig out of a hole," Bloomquist said. "We've just had so much going on here in the shop. We've been working on things to try and get better all the time and it just takes up time. Then the next thing you know, you're scrambling."