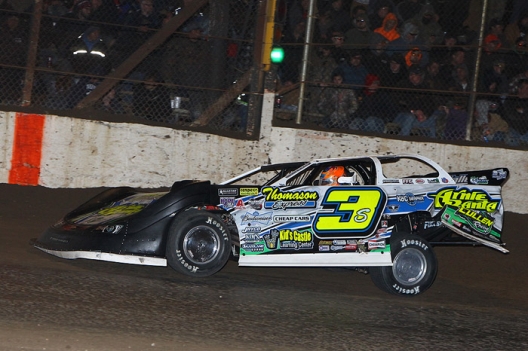 La SALLE, Ill. (March 26) — After completing a $20,000 sweep of the fifth annual Thaw Brawl weekend with a victory in Saturday night’s 75-lap finale at La Salle Speedway, Brian Shirley proved without a shadow of a doubt that he’s a serious Dirt Late Model contender in 2016.

The 34-year-old from Chatham, Ill., might even be one of the division’s five best drivers at this early juncture of the campaign — although he won’t go so far to claim that status.

“I don’t know if we’re up there at their caliber yet,” Shirley said when asked if his second win in as many nights put him in the conversation with such red-hot ’16 racers as Josh Richards of Shinnston, W.Va., Jonathan Davenport of Blairsville, Ga., and Scott Bloomquist of Mooresburg, Tenn. (none of whom competed at La Salle). “We’re definitely knocking on the door. We’re definitely knocking on the top five (drivers list) I believe.”

The $15,000 triumph certainly continued Shirley’s strong burst out of the 2016 starting gate with his new team fielded by Bob Cullen of Chilton, Wis., and heavily supported by Arnie Ranta of Saint Paul, Minn. After running well during Georgia-Florida Speedweeks and scoring podium finishes earlier this month at Clarksville (Tenn.) Speedway and Brownstown (Ind.) Speedway, Shirley was the star of his home state’s first big-money show of ’16, which was tri-sanctioned by the Sunoco American Late Model Series, Corn Belt Clash and MARS DIRTcar Series.

Backing up his $5,000 victory in Friday night’s 50-lap Thaw Brawl preliminary feature, Shirley calmly advanced from the seventh starting in Saturday evening’s extra-distance headliner to grab the lead on lap 50 from race-long pacesetter Jason Feger of Bloomington, Ill. He then survived a furious last-lap challenge from Bobby Pierce of Oakwood, Ill., to win by a scant half car-length margin over the 19-year-old — and duplicate Pierce’s 2015 feat of sweeping the Thaw Brawl weekend.

Frank Heckenast Jr. of Frankfort, Ill., finished third, recovering from a disqualification for weighing in light following an apparent third-place run in the previous night’s 50-lapper. While the 27-year-old World of Outlaws Craftsman Late Model Series regular never led a lap despite starting from the pole position, he ran solidly in the top five for most of the distance and and crossed the finish line within sight of the leaders.

Sixth-starter Shannon Babb of Moweaqua, Ill., placed fourth one night after his car sustained relatively minor damage — and he escaped injury — when he bicycled in turn four and rolled once early in the feature. Rusty Schlenk of McClure, Ohio, quietly marched to a fifth-place finish after starting 10th.

Feger, who started second and outgunned Heckenast for the lead at the initial green flag, faded from contention after losing the lead to Shirley and ultimately slowed with a flat right-front tire on lap 65 while running at the back end of the top 10.

“Jason was awesome,” Shirley said of his early battle with Feger, which commenced shortly after Shirley overtook Chris Simpson of Oxford, Iowa, for second place on lap 20. “He’s my buddy … I would’ve liked to at least seen him finish the race. It was a bummer that he got a flat tire.”

Shirley made his deciding pass of Feger using the inside groove rounding turns one and two at the event’s two-thirds mark, but he didn’t cruise to the checkered flag in his Longhorn Race Car. Pierce made things interesting on the final circuit.

Pierce started third, but he had to restart at the rear of the field after slowing on lap 27 because his Pierce Race Car’s right-rear wheel cover caved in after he slapped the backstretch wall while battling Simpson for third place. The teenager then charged through the pack, finally reaching second on a lap-67 restart when he slid by Heckenast.

Tossing his car around the extreme outside of the track, Pierce drew close to Shirley negotiating turns three and four on the last lap. Shirley didn’t know Pierce was there, but he broke Pierce’s momentum by drifting across the track off turn four and beat his fellow Illini to the finish line.

“I didn’t know before that caution come out (on lap 67) I had a pretty sizable lead,” Shirley said. “I didn’t know how good anybody was, but I figured there might be a dive-bomb or a sling-shot off the top on that last lap so I just went in there and kind of held my own through the middle and slid up. I just made it a little exciting to come to the end there, but I knew what I was doing.

“I didn’t (hear Pierce), but I figured somebody was probably gonna get a run on me so I just made the best of it. I just replayed what maybe I would’ve done if it was the last lap coming to the checkered. We had a good enough car to get us the win and hold ‘em off.

“It was good racing,” he added. “It was exciting because we fought for this one. Last night we did come from fourth (to win), but we jumped in early into second. This one, it took patience. I knew it was a long race … I’m just trying to put the time in in these long races, and it helps when the race car is good.”

And Shirley’s Bob Cullen Racing machine has been superb so far this season — a fact that helped him remain patient.

“I even told Bob before I went out, I said, ‘Listen, I’m not gonna beat the car to a pulp to win the race. I feel we have even bigger things to come this year and I’m not gonna ruin a car this early in the year for the money,’” said Shirley, who is considering following the WoO tour full-time this season (he ranks third in the points standings heading to the circuit's April 1-2 weekend at his home state's Farmer City Raceway). “The money’s great and I’m glad we won, but I’m just glad we won the way we did.

“All in all, it was a good weekend. I’m very happy for Bob Cullen and Arnie Ranta … just everybody that’s been involved with us. It’s just gratifying to show the hard work plus the success and the money spent to get here.”

Pierce, meanwhile, didn’t hang his head after falling short of capturing the Thaw Brawl for the second consecutive year.

“It was a heck of a race,” Pierce said. “The whole time out there it was just so rough and I was pounding the cushion. There’s just such a fine line of making a crazy-fast lap or pushing over the cushion — like I did a lot of times.

“The last lap I knew Brian might be going to the bottom, so I was trying extra hard just to get as close as I could possibly get in case he did. He shot to the bottom and I just wasn’t close enough to be able to do anything. I’m sure I made it exciting … I knew I wasn’t gonna get him, but I was trying to just get as close to his nose as I could. If he would’ve took the bottom just a little bit slower, if he was trying to be cautious or whatever, then I might’ve been able to sneak around the outside but I didn’t want to wreck him coming to the checkers or anything.”

Pierce was happy he was able to end the weekend with a runner-up finish after his mid-race pit stop and retiring from Friday night’s feature with mechanical trouble.

“We had a mud-cover cave in, that’s why we had to pull in earlier,” Pierce said. “If that wouldn’t have happened, we might’ve been in the right spots at the right time, but oh well. It’s a heck of a night, and after breaking last night this just tops it off.”

Three caution flags slowed the event. Pierce brought out the first when he fell off the pace on lap 27. Later, on lap 66, Jared Landers of Batesville, Ark., spun between turns one and two after contact with Pierce as they battled for fourth place, and on lap 67 Mike Spatola of Manhattan, Ill., spun in turn two.

Notes: After scoring his first-ever sanctioned victory at La Salle on Friday night, Shirley’s triumph in the finale represented his richest win since he earned $35,000 for capturing the 2006 Knoxville Late Model Nationals. … With the event’s tri-sanction, Shirley was credited with his eighth career win in both ALMS and MARS competition and his third career Corn Belt Clash victory. … Chris Simpson, who started fourth and briefly challenged Feger for the lead early in the race, was forced to pit with a flat right-rear tire on lap 67 while running third. He settled for an 11th-place finish. … Brian Birkhofer of Muscatine, Iowa, finished 10th in his first feature start since announcing his retirement following his victory in the 2014 Knoxville Late Model Nationals. He started ninth one night after his debut in the Gheer’d Up Racing MasterSbilt car ended early due to a heat-race crash.