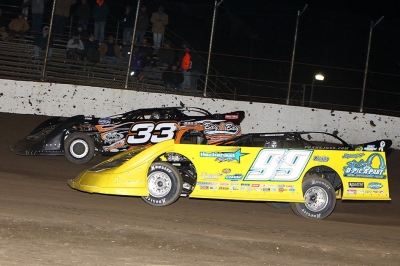 “I’ve run a lot of big races the last couple years and I definitely put myself where I wanted,” Heckenast reflected after the fact. “In the beginning I fell back too far (out of the top five after starting from the pole position), but I paced myself. I got back to second (behind eventual winner Brian Shirley of Chatham, Ill.) with (less than 25 laps) to go — it’s exactly what I wanted. I didn’t want to be leading because this place changes lines so much … and then me and (early leader Jason) Feger (of Bloomington, Ill.) hit there and I broke my (steering) rack and got like 6 inches of toe, so I didn’t really know where I was going.”

Heckenast, 27, didn’t plummet through the pack because of the handling problem, but his Club 29 Race Car wasn’t quite right to make a serious bid for the $15,000 first-place prize — a payoff that would have given him the richest win of his 12-year-old Dirt Late Model career. He was simply unable to rotate the quarter-mile oval like he wanted.

“That’s when Bobby (Pierce) passed me,” Heckenast said, noting that the 19-year-old from Oakwood, Ill., overtook him for second place on a lap-67 restart. “I got under him a couple times (fighting back), but I didn’t really want to push the issue because I didn’t know where the front end was gonna shoot me.”

Heckenast ultimately settled for a third-place finish, flashing under the checkered flag about a half-straightaway behind the tight top two of Shirley and runner-up Pierce, whose last-lap challenge fell a half length short. It wasn’t the result he had hoped for, but it was still a great rebound from frustration the previous night — he lost an apparent third-place run in the weekend’s 50-lap preliminary feature because he was disqualified for his car weighing in light — and continued his solid start to the 2016 season that he began with top-five finishes at three tracks during last month’s Georgia-Florida Speedweeks.

In retrospect, however, the calculating Heckenast wondered whether he should have pressed the issue a bit more before his family-owned machine was handicapped by damage from his scrape with Feger. His performance has improved substantially over his two seasons as a World of Outlaws Craftsman Late Model Series regular — he was the national tour’s rookie of the year in 2014 and last year registered his first-ever victory on the circuit — but he admitted that he continues searching for the correct way to blend more aggressiveness into his driving style.

“Obviously Pierce was by far the fastest car, but that comes with lots of risk, too,” Heckenast said after Saturday’s feature. “I feel like I points race too much sometimes … I could have definitely let it hang out there like Pierce and Shirley a little bit, but you could’ve also been in the fence, too.”

The experience Heckenast has obtained running with the WoO stars has raised his talent to the point where he can contend for a win in an event like the Thaw Brawl, which was tri-sanctioned by the Sunoco American Late Model Series, Corn Belt Clash and MARS DIRTcar Series. He just needs to sometimes remind himself to change his mindset a bit.

“I’m not talking myself up, but the (WoO) tour brought me from where I was at to the next level where I can run with these guys,” said Heckenast, who plans to chase the WoO schedule full-time for a third consecutive season. “I’m not saying I can outrun them every night, but I’m saying I can run with them now. We’re (battling for) top-fives.

“Now I just got that points thing going on in my head. I treat every place like it’s a points race and I shouldn’t. I definitely should’ve let it hang out out there, but also, at the same time, going home with a wrecked car and a 24th-place finish doesn’t pay the bills either. I’m happy with it, and I think once we get off the tour this year, I think next year, when we get on like a (Brian) Birkhofer (special-event) schedule, I think it might come around for us.”

With the racetrack fast after Thursday precipitation filled it with moisture, Babb ran into serious trouble as he tried to charge around the outside.

“The car bicycled up and went over,” said Babb, who wasn’t injured in the flip. “It just tore a fender up and a front bumper, so we put it back together (for Saturday night). We didn’t have any problems on it (Friday) night (before the accident). I was just a little behind on the wheel the first night out … I had to practice up on the cushion a little bit.

“That’s never fun,” he added, noting Friday's heavy conditions. “Tracks like that … they think they’re fun, but anymore with 900 horsepower and hooked-up cars, you could see everybody had a little handful. That’s racing … you just gotta get through it and go to the next night.”

Babb did just that, righting his ship in Saturday night’s finale. He recorded a steady fourth-place finish after starting sixth to kick off a season that will once again see him run a schedule of special events and, most likely, the UMP DIRTcar Summernationals.

“The track was a lot slower tonight — it was harder,” Babb said. “Yesterday there was nothing you could do about it. They had a lot of rain, and it was real sticky.

“We was happy with our run tonight. We definitely wasn’t the best car out there, but we was all right and got something to work off of. I knew we was probably gonna be right around third or fourth. I know Brian (Shirley) looked like he had it under control, and Little Bobby was even givin' her hell. I was in a good seat to watch a good race.”

“We definitely came into this weekend not as prepared as we should’ve been,” said Schlenk, who made the La Salle meet his first starts of 2016 with his year-old Rocket Chassis. “I’ve been working on everybody else’s stuff all winter (preparing cars for customers of his business). I was trying to have my big motor ready for this and I didn’t. I’ve just got my small motor, my old 18-degree motor ready, so I was coming here to survive and get some ALMS points.”

A former UMP DIRTcar weekly champion and a three-time ALMS titlist, Schlenk, 29, achieved better results than he anticipated. He finished sixth in Friday night’s 50-lap preliminary feature and improved to fifth place in Saturday evening’s 75-lapper, giving him a strong start in his pursuit of a second consecutive ALMS points crown.

“We probably should’ve ran better last night, but somebody forgot to scale after they qualified so I had to start tail in the heat,” said Schlenk, who was, of course, referring to his own post-prelim mistake. “We made it through the heat tonight and we ran a little bit better. Our heat was stacked … I didn’t even expect to make it out of that deal but ended up running third and made it.

“It was a heck of a weekend. This car was real good at the end of last year so I knew we’d come into this year pretty fast, but I didn’t expect to run that good this weekend.”

Though Bobby Pierce was unable to repeat his sweep of last year’s Thaw Brawl, his charge from the rear to finish second in Saturday night’s 75-lapper after pitting on lap 27 with to a collapsed right-rear wheel cover gave him plenty of confidence for a big stretch of racing in the Midwest. “It should be good momentum heading into next week,” he said, referring to the April 1-2 WoO Illini 100 weekend at Farmer City (Ill.) Raceway. “I went to Farmer City and practiced earlier this week and we seemed really fast so I’m looking forward to the Illini.” … Dennis Erb Jr. of Carpentersville, Ill., who won a Thaw Brawl feature in 2012, ’13 and ’14, fell short of victory lane for the second consecutive year. He failed to qualify on Friday night and placed eighth Saturday. … Jared Landers of Batesville, Ark., and Tim McCreadie of Watertown, N.Y., were the only non-Illinois-based Lucas Oil Late Model Dirt Series regulars who used the Thaw Brawl to tune up for the tour’s event at La Salle on May 21. Landers was strong both nights — he finished second on Friday and was contending for a top-five spot late in Saturday’s feature when contact with Pierce sent him spinning between turns one and two (he was credited with 20th place) — while McCreadie struggled with a 23rd-place run on Friday (he was involved in an early tangle) and a DNQ on Saturday. … Noticeably absent from competition at his home-state track was Brandon Sheppard of New Berlin, Ill. … Mitch McGrath of Waukesha, Wis., was a fresh face in the La Salle mix, earning a fifth-place finish in Friday night’s feature. The 28-year-old wasn’t as strong on Saturday, finishing 18th. … Open-wheel modified ace Ricky Thornton Jr. of Chandler, Ariz., made an impressive debut at La Salle, placing third in Friday night’s feature driving Wisconsinite J.R. Haley’s machine. He had trouble in Saturday’s finale, however, failing to qualify after slapping the wall while bidding for the final transfer spot in his heat race. … Three-time MARS champion Tony Jackson Jr. of Lebanon, Mo., was the lone regular from the regional tour to log a pair of top-10 finishes; he was ninth on Friday and seventh on Saturday in a rare appearance at an Illinois track other than Granite City’s Tri-City Speedway. He raced at La Salle after celebrating his 10th wedding anniversary to wife Krissy on March 23 and his 34th birthday March 24. … Despite cool temperatures, La Salle promoter Tony Izzo Jr. was smiling about the weekend’s attendance figures. Saturday night’s turnout was especially large with fans filling the grandstand all the way to the bottom.