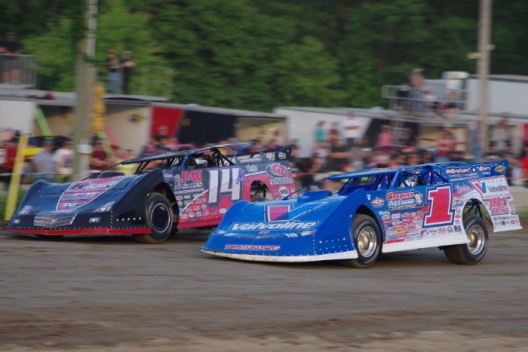 After leading from the start of the 50-lap race, Richards, 27, of Shinnston, W.Va., expertly picked his way through heavy traffic during the race's closing laps and held off points leader Shane Clanton's furious late charge to win the second round of the Great Northern Tour in a side-by-side finish at the third-mile oval.

"It was all about patience tonight," said Richards, who earned the 53rd WoO victory of his career in just the second series race ever held at the Ontario track. "I just stayed really patient because there was really nowhere to go.

"I knew Shane was coming and we kept getting boxed in. I saw Shane at the white flag, but I knew if I could just keep my speed up and not have (a lapped car) push up into me I could win it."

Clanton, 39, of Zebulon, Ga., nearly pulled off the last-lap pass when Richards was forced to drive to the high side of the slower machine of Boom Briggs entering turn three, but the low line was blocked just enough by Briggs to slow Clanton's run off the corner. Richards edged back ahead to claim a $10,650 victory by a thin margin of 0.142 seconds.

The victory was a nice rebound for Richards, who finished seventh in the Great Northern Tour opener at Fonda (N.Y.) Speedway on Thursday after an engine problem forced him to start from the tail of the main event in a backup car.

With Clanton winning the Fonda race and scoring points in the championship chase, Richards was happy to regain at least a few points on Saturday. He heads into round three of the Great Northern Tour at Cornwall (Ont.) Motor Speedway on Sunday 94 points behind Clanton.

"I feel like we've had a really fast car most of the year, but we've just had a lot of bad breaks like what happened at Fonda," said Richards, who thanked the crew on his Valvoline-sponsored Rocket Chassis house car team for their hard work repairing the issues from Thursday to get ready for Saturday's race. "Shane's been really fast and consistent. We've just got to focus on winning races and finishing up front. It felt really good to get a win tonight and pick up some points, even if it was only a few."

Clanton settled for the runner-up spot in notching his 15th top-five finish in 18 races this season. Tim McCreadie of Watertown, N.Y., crossed the finish line third, well behind the lead battle. Morgan Bagley of Longview, Texas, was just behind McCreadie in fourth with Rick Eckert of York, Pa., rounding out the top five.

Gunning for what would have been his second straight WoO victory and his sixth on the season, Clanton challenged Richards through the middle portions of the race and gave all he had to catch Richards in the closing laps. But his Weldbank Energy Capital Race Cars house car came up half a car short of completing the winning pass.

"I tried the top, bottom, middle - it didn't matter," Clanton said of his late-race bid for the lead. "We were doing all we could to get by him, but he was just a bit better in lapped traffic.

"I got to running the top and caught him a little bit, but then I think I hurt my tires and got them a little too hot. I caught him at the end when he got boxed in behind those cars and made a valiant effort on the last lap."

The race was slowed by four cautions. The first appeared with two laps complete for a tangle back in the pack involving Jim Bernheisel of Lebanon, Pa., and Steve Baldwin of Trenton, Ont. Another yellow flag waved just after the restart for the slowing machine of Charlie Sandercock of Belleville, Ont. A lap-eight caution was for Union, Ky., driver Darrell Lanigan's brief adventure off the banking in turn four, and a flat tire for Bernheisel brought out the final caution with nine laps complete.

WoO move to another Canada oval on Sunday in Cornwall (Ont.) Motor Speedway for round three of the Great Northern Tour. The four-race trek concludes on Tuesday with a visit to Weedsport (N.Y.) Speedway.