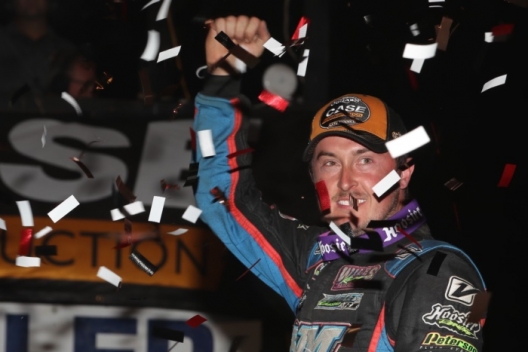 DAVENPORT, Iowa — Fading early from his pole starting spot at Davenport Speedway, Tanner English stuck to his gameplan of counting on his softer tire to pay off at the finish. While the Benton, Ky., driver dropped to seventh before the halfway point of the 70-lap finale of the Quad Cities 150, English slowly but surely got headed the right direction in the race's late stages.

With his rally aided by the departure of several top contenders, English rose to the top of the heap on the 62nd lap, going from fourth to first over a two-lap stretch at the quarter-mile oval and repelling Bobby Pierce's late charge for his second consecutive World of Outlaws Case Late Model Series victory and a career-high $30,000 payday.

English, who left Pierce to ponder three consecutive nights of runner-up finishes, added a second WoO victory just 24 hours after his career first and the tour's leading rookie is eager to continue his hot streak that helped him draw dramatically closer to faltering WoO points leader Dennis Erb Jr. in the title chase.

The low-running English fought off the high-side charge of Oakwood, Ill.'s Pierce, who started ninth and fell a half-second shy at the checkers. Shannon Babb of Moweaqua, Ill., who started on the tail of the field with a promoter's option, rallied to finish third with Shane Clanton of Zebulon, Ga., and home-tracker Justin Kay of Wheatland, Iowa, rounding out the top five.

Two drivers who combined to lead most of the race and another top contender fell by the wayside during the stretch of four cautions from laps 60-64.

Ryan Gustin of Marshalltown, Iowa, who led laps 31-61 while building leads of more than three seconds during a long stretch of green-flag racing, lost his brakes and retired during the lap-64 caution.

Ashton Winger of Hampton, Ga., led the first 30 laps, but slipped over the banking on a lap-60 restart while running fourth. He'd have gotten his spot back after a yellow flag flew for another driver, but he headed pitside thinking he had a flat tire and had to restart deep in the field.

And last year's $30,000 winner Devin Moran of Dresden, Ohio, who started third but slipped out of the top five, rallied and grabbed the second spot with a fourth-to-second move past Winger and Shane Clanton. But after the third of three cautions, Moran was forced to pit to replace a tire.

While Winger and then Gustin dominating most the race, English was virtually an afterthought as his Riggs Motorsports car dropped to fourth by the eighth lap, out of the top five on lap 24 and finally to seventh on the 31st lap. He was mired in that position until lap 47 and was up to fifth in the late stages to take advantage of the late-race defections.

Just like he did in winning Friday's 40-lapper, English counted on his right-rear Hoosier LM-30 — a softer tire than the LM-40 most drivers chose — to perform well during the race's most critical stages.

"When they took off there, I know they had (harder tires) on and I had a (softer tire) again," English said. "That thing, it stayed the same speed the whole time. They took off and got going there and I just kind of rode around and tried to save it. And then they started backing up to me, you know. I could see 'em coming back."

English moved from fourth to second on lap 61, then overtook the struggling Gustin on lap 62 and led the rest of the way.

"It was rolling pretty good there at the end. I don't know. I can't say enough about this Longhorn Chassis. It was spot on. The Bilstein shocks on it, you know, they're, working killer and I can't say enough about it," English said. "I didn't change much, just just a few minor things. That's what it takes to win these races. You gotta get a car that's pretty close, and then you can just tune on it."

English's lone scare came from getting a piece of a late scramble in turn three.

"I got a bent wheel or something there at the end there when I got KO'd. It bent the wheel and I had a bad vibration there after that. I was praying (it wouldn't) come apart. So lucky to survive and hang on for that," English said. "I know somebody — I guess it was Bobby on the outside of me there for a few laps — and I just stayed true to the bottom and stuck it out."

Pierce, saying his car was "unbalanced" until the track got slicker later in the race, drove aggressively — "to the point where I was almost falling off the corner on every single corner" until he drew closer to the top-five runners. But things didn't fall his way on the repeated cautions as he tried to battle past English and others but had moves erased by yellows.

"Tanner drove a helluva race on the bottom. His car was sticking down there really good. We did all we could to try and beat him, but we needed that position on him. And with passing, you don't pass a guy that good twice, three times," Pierce said. "It's hard to, when you've got a guy that good, especially how he was on the bottom, it's hard to have to pass him that many times. We did it twice but just couldn't do it a third time. We needed the position. So congrats to him."

Four cautions slowed the action, three of them on lap 60. Max Blair slowed for the first yellow and Brian Shirley's flat left-rear tire on the restart drew another quick caution flag. The final caution appeared for a turn-three tangle involving Spencer Diercks, Boom Briggs and the points-leading Erb of Carpentersville, Ill., who pitted to change a flat tire and had to return to the pits because of other apparent issues. The final yellow appeared on lap 64 for Gordy Gundaker's flat tire.

In victory lane, English's voice cracked as the came to terms with his richest victory.

"I'm gonna go home see my wife and my baby, you know, I miss them," he said. "Wish they were here. I can't say enough about my wife, you know, she puts up with a lot. I stay gone a lot and so pretty cool. And you know, I can't think Riggs Motorsports enough for everything they do. Scott (Riggs), for believing in me, Jason Riggs, just everybody. Blake, Jamie, Roger, just everybody. It's a big group effort and I appreciate it."

Notes: English has seven overall victories on the season, all but one since June 11. ... He entered the race 136 points behind Dennis Erb Jr. in the title chase and cut the margin to 98 points with a dozen races remaining. ... Tyler Bruening spun out of a transfer spot in the first heat but transferred through a consolation race. ... Shannon Babb slipped over the banking late in the second heat to give up a transfer spot (Brian Shirley went over the banking earlier in the heat but rallied to finish third). ... Babb received a promoter's option starting spot for the 70-lapper.