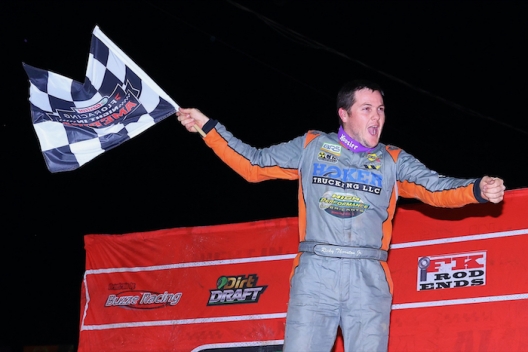 Josh James/joshjamesartwork.com
Ricky Thornton Jr. climbs atop his car to celebrate at Senoia.
What won the race: Dominating all 75 laps from the pole, Ricky Thornton Jr. of Chandler, Ariz., cruised to a $53,053 payday Saturday at Senoia Raceway in the Peach State Classic, the season finale on the Castrol FloRacing Night in America tour. Thornton took the checkers 10.224 seconds — more than a half-track margin — ahead of runner-up Hudson O’Neal in the caution-free feature.
Quotable: "My crew guy was jumping up and down, telling me to slow down, so I knew (my lead) was pretty good," Thornton said. "I got to Ricky Weiss and I kinda got stuck and I just didn't know what I needed to do, finally once I got by him, then I felt like I picked my pace back up."
Key notes: Thornton, who notched his third Super Late Model victory of the season and the second richest Late Model victory of his career, lapped all but five competitors. ... Brandon Sheppard clinched the $75,000 Castrol FloRacing Night in America title by entering Saturday's event. ... Afternoon rain pushed back hot laps about 90 minutes later than scheduled. … The checkers fell about 9:45 p.m. after a 20-minute, 20-second feature.
On the move: Ashton Winger of Hampton, Ga., started 10th and finished fourth.
Winner's sponsors: Thornton’s SSI Motorsports Longhorn Chassis is powered by a Clements engine and sponsored by Hoker Trucking, Dyno One, Excel Floor Covering, Certified Inspection Service, Big River Steel, D&E Outside Services, Dienes-Nitz Solutions & Powdercoating, Sub-Surface of Indiana, West Side Tractor Sales, Shelby Materials and Slicker Graphics.
Points chase: Final: 1. Brandon Sheppard (699); 2. Ricky Thornton Jr. (609); 3. Mike Marlar (560); 4. Bobby Pierce (536); 5. Tyler Erb (522); 6. Garrett Alberson (520); 7. Hudson O’Neal (519); 8. Dennis Erb Jr. (366); 9. Devin Moran (323); 10. Chris Madden (312).
Current weather: Overcast, 48°F
Car count: 48
Fast qualifier: Garrett Alberson
Time: 13.964 seconds
Polesitter: Ricky Thornton Jr.
Heat race winners: Ricky Thornton Jr., Hudson O'Neal, Morgan Bagley, Ricky Weiss
Consolation race winners: Brandon Sheppard, Wil Herrington
Editor's note: Results and race details are unofficial.
From staff reports

SENOIA, Ga. — In a cinematic version of Saturday's caution-free, 75-lap domination at Senoia Raceway, the winner might've said something clever like: "How 'bout them peaches?"

But after Ricky Thornton Jr. of Chandler, Ariz., thoroughly dismantled a top-notch field in the Castrol FloRacing Night in America finale for a $53,053 victory in the Peach State Classic, there wasn't much left to say about the story Thornton's SSI Motorsports No. 20rt told with his dazzling victory.

In a 20-minute race where Thornton crossed the finish line 10 seconds ahead of his competition and lapped all but five drivers, Thornton got an unusual signal from a teammate as he motored around car after car from his pole starting spot.

"My crew guy's jumping up and down telling me to slow down," Thornton said, "so I knew I was pretty good."

Pretty good is a $53,053 understatement as Thornton grabbed his richest victory of the season and wrapped up a $15,000 runner-up check on the second-year tour behind tour champion Brandon Sheppard of New Berlin, Ill., who finished 13th in the finale.

The outcome was never in doubt. Thornton built a 3.4-second lead after 10 laps, and while that margin was cut to 1.1 seconds seven laps later when he hit his biggest batch of slower cars, once Thornton cleared that traffic he built an insurmountable lead that kept him out of sight of the competition most of the rest of the way.

"I was really good. My crew guy kept telling me I had a good lead, but every time I'd slow down, I'd start getting loose and then really get stuck behind a lapped car," said Thornton, whose crew chief is veteran wrench Anthony Burroughs. "We tried (a suspension setup) that Burroughs wanted to do and it was really good for us."

In Friday's preliminary feature, when Kyle Bronson of Brandon, Fla., raced to a $20,000 victory, Thornton rallied but couldn't quite get into contention and ended up getting caught up in one wreck and spinning another time. Things went his way Saturday.

"With the way last night went, I felt like we could've run top-three and then we got caught in that wreck. I didn't know what I needed to do today to stay ahead of (top contender Mike) Marlar. I figured if we went out and won, we wouldn't worry about it."

Down by nearly six seconds just past halfway, O'Neal knew he was running for second unless misfortune befell Thornton.

"He was pretty good. He was just a little bit more maneuverable than I was. I couldn't quite get the (car to) slide quite good enough down there, but we'll take a second," said O'Neal, who was making his second-to-last start with Double Down Motorsports before heading to the Rocket Chassis house car in 2023. "First time ever here and this thing raced pretty awesome. There was lapped cars everywhere and I would have never thought it went 75 green (laps). It was really cool. We had we had to good hot rod all weekend, just obviously needed to be quite quite a bit better to catch the 20."

"Major turnaround from last night," Moran said. "Man, I got into that (infield tire barrier). I tried running the very bottom off of (turn) two, and them things are pretty hard and they don't move, so I broke the bumper and jacked the left front up."

Despite the damage, Moran was able to pressure O'Neal late in the race and a third-place finish helped him enjoy his Southern journey that might've been spoiled by weather except for massive efforts to dry the facility after Thursday, Friday and Saturday rain.

"They have a great staff, you know, from the gates to the concession stand to everywhere else. I don't get to race down in Georgia a whole lot, but man I love coming down here and hanging out with these guys," Moran said, adding that "this is the heart and soul of Dirt Late Model racing. The best Dirt Late Model racers always come out of Georgia and Tennessee.

"We sucked last night. We stayed up and thought about stuff and talked all morning and we just worked really hard. So I want to thank Jeremy and all these guys that he brought to the races with us. They all worked their butts off."

Notes: Morgan Bagley of Longview, Texas, started outside the front row but faded to finish 14th. ... Fifteen drivers were running at the finish. ... The Castrol tour had 219 competitors enter at least one event during the 11-race season. ... Among drivers failing to make the feature lineup: Hall of Famer Scott Bloomquist (broken driveshaft in heat), Payton Freeman (in the Team 22 Inc. entry), Booger Brooks (a 44-race winner this season in multiple divisions), Dalton Cook (racing with a broken hand), Jason Croft, Russell Erwin, Parker Martin, Cla Knight and Jordy Nipper. ... After remnants of Tropical Storm Nicole put the track to the test to get Friday's show in, more afternoon rain Saturday pushed back the start of the finale's program.