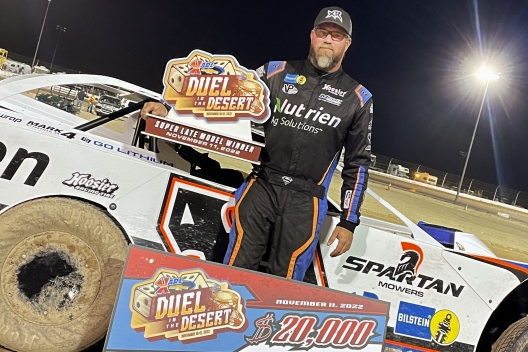 LAS VEGAS, Nev. — Jonathan Davenport appears to be bolstering his bullpen of race cars ahead of the 2023 racing season, as the No. 49 Double L Motorsports team rolled out a new race machine Friday at the Dirt Track at Las Vegas and added upon their record year.

The Blairsville, Ga., driver known as Superman registered a clean sweep of the second night of the Duel in the Desert at the Sin City oval, leading all 40 laps for the $20,000 victory on a night he also took fast time honors and a heat race win.

“A new car is like a new girlfriend, I guess. You have to learn what she likes,” Davenport said. “It’s just a testament to all my guys, all the handwork they’re putting in. The guys at Longhorn and Bilstein Shocks. The team Lance Landers has let us assemble here is just awesome.”

One night after last year’s Duel in the Desert winner Bobby Pierce pushed his right-rear tire too hard running the top of the half-mile oval — so hard that the tire went flat on Pierce while leading with three laps to go — Davenport made the long way around the racetrack work on Friday.

Davenport couldn’t quite get his Longhorn Chassis to latch onto the cushion, but he seldom hopped off the top side of the track to make speed.

“I couldn’t run off the cushion. I don’t know if anybody could, really,” Davenport said. “It was just so much faster up there.”

While Davenport maintained a multisecond advantage most of the race, one scare occurred on lap 22 when his pace slowed in the midst of what he thought had been an issue with his car. Davenport’s three-second lead cut in half as Overton rapidly closed in.

“I thought our night ended (on lap 22). The hood flew off right here or something,” Davenport said. “I ran over it, and then I backed my corner up, and I pushed over the cushion down there. I hoped I didn’t tear the nose off of it at that point. I eased off of it the next corner. It seemed like everything was OK.”

Davenport, who lapped up to ninth, never faltered the rest of the way. Overton, meanwhile, started third and ran second for the duration of the feature event. The race’s only caution occurred on lap eight for Coos Bay, Ore.’s Preston Luckman and his flat right-rear tire.

Outside of the opportunity to take a stab at Davenport on a restart, Overton never got close enough to make a move for the win. After starting eighth and finishing fifth in Thursday’s opener, Overton gladly accepted Friday’s outing.

“We’ll take it. We were way better than what we were last night,” Overton said. “We weren’t as good as J.D. We definitely made gains on it. We’ll work on it and see what we have tomorrow.”

Thursday’s opening night winner, Shane Clanton of Zebulon, Ga., started second and finished third, adding that his night was “not bad” and that “we just need to be a little bit better there like Jonathan.”

Clanton was also one of the lone frontrunners to commit to the bottom of the Las Vegas dirt track in the early going before he begrudgingly moved to the preferred groove up top.

“I hate this cushion, but you have to be up there to make some time,” Clanton said. “It is what it is. If (there was no cushion), it’d rubber on the bottom.”

McCreadie, meanwhile, joined Clanton, Davenport and Overton as the only drivers to finish inside the top-five through two nights of the Duel in the Desert. The reigning two-time Lucas Oil Late Model Dirt Series champion wasn’t as good as Thursday’s runner-up showing, but he still left content with Friday’s result.

“I fired early and thought maybe we’d have a chance and get up to third there,” McCreadie said. “I have to run so hard to be in the cushion. I’m just not balanced enough, and it just fries the left-rear tire off the car, and about lap 10 or 15 we were there. We’ll work on it tomorrow.

“Congrats to everyone up front. It’s a fun track to race on. I really enjoyed it. We’re not as good as we need to be, but it’s fun to be dicey and to race. Shane and I were trading sliders. Everyone was trading sliders. And they are slider sliders, where you’re 10 feet by the guy by the exit of the corner. It’s a lot of fun to race that way.”