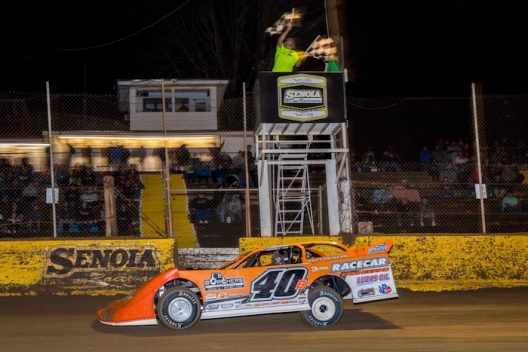 SENOIA, Ga. — Senoia Raceway was the perfect place for Kyle Bronson to put an end to his year-long drought. And the Brandon, Fla., driver was quick to thank his crew, family and car owners Wayne and Shirlene Hammond after Friday's Castrol FloRacing Night in America victory on the opening night of the Peach State Classic.

Putting the pain of a winless season behind him, the 32-year-old Bronson led all 50 laps from outside the front row, staying ahead of some feisty action behind him in grabbing a $20,000 payday and his first Castrol tour victory (last year's Peach State Classic wasn't a tour event).

Battling a track surface soaked by Tropical Storm Nicole, Bronson fought off multiple challengers and took the checkers 0.893 of a second ahead of runner-up Spencer Hughes of Meridian, Miss., while 11th-starting Garrett Alberson of Las Cruces, N.M., finished third. Dennis Erb Jr. of Carpentersville, whose heat-race miscue forced him to rally from 19th in the main event, was fourth and Hudson O'Neal of Martinsville, Ind., was fifth despite contact from fast qualifier Tyler Millwood as he took the checkers, sending O'Neal's car spinning into turn one.

Not around at the finish of the caution-plagued race were two of Bronson's biggest challengers. Chris Madden of Gray Court, S.C., suffered a flat left-rear tire on the 11th lap that knocked him from contention, and Mike Marlar of Winfield, Tenn., saw his chances go by the wayside after contact from Ashton Winger in turn three with nine laps remaining.

Bronson will be among the favorites when everyone returns Saturday for the tour finale that pays $53,053 to the winner in the richest event on the second-year Castrol Series.

"It's awesome, you know. It's $20,000," Bronson said in victory lane. "We're close to home, only four hours from home. I really look forward to coming here. I know these guys will have this Grade-A facility here tomorrow."

Bronson entered a 1-race-old Rocket Chassis that carried him to victory.

"We've been racing our other car a little bit and we've been having a couple ignition problems and (team owner) Wayne (Hammond) told us to get this other car out this week and we tested a bunch this week," Bronson said. "I put my Integra Shocks back on — like I said, those guys have been helping me a ton, and Rocket Chassis, Mark Richards and Steve Baker, they always helped me a ton. My guys, they bust their butt here. I've got Tanner, Josh, Sonny and my beautiful wife, all my kids. Wayne and Shirlene, they gave me everything I need to win here."

Getting the jump on the pole-starting Winger at the outset, Bronson controlled most of the race comfortably, but Marlar pulled within three-tenths of a second just past the race's midpoint.

"At the beginning there, (I) just trying to drive the car as straight as I could and not wear to tire out because we all put soft tires on here tonight. I just didn't want to slide my tire much and get my tire too hot there," Bronson said. "Then I seen Marlar down there digging in the bottom and I knew how to move down there in (turns) three and four. But I had a really good car and I felt like we could pick it up a little bit."

He credited the track crew for whipping the surface into shape at a track that's typically dry and slick rather than so moist that drivers had to stop during a midrace caution to replace mud-caked helmets. That the race happened at all was in doubt just hours before the event.

"They busted their butt here the last couple days. I was looking (at weather forecasts) Monday, Tuesday, I was like 'There ain't no way these guys are racing.' But they proved me wrong. They work harder than anybody in the country, I can promise you that," said Bronson, looking forward to Saturday's action. "I think we gotta tune the car a little bit. It's definitely a different condition than we ever seen here before, but you know, I'm looking forward to it. I'm looking (forward) to the challenge. I love this place and I'm just ready to get going tomorrow."

The third-starting Hughes slipped back to fifth early before inching back to the front and avoiding pitfalls that eliminated others.

"With all the weather they had and the short time they had to get it ready, I can't complain any. It was way better than what it could have been for sure. But hats off to Kyle, he was real good all night tonight and I'm glad to see him finally get him one. We'll just patch this thing back up and get ready for another day tomorrow," the runner-up said. "I'm sure the racetrack will probably be a lot different tomorrow, too. We've just gotta go back to the drawing board and just get a little bit better. If this condition comes around again, I know we definitely, we've got some things we can improve on. Hopefully we can work on it and maybe pick up one spot tomorrow."

Alberson started in the sixth row but broke into the top five before the halfway mark.

"That was pretty intense right there. Man, this car was really good. As soon as we gassed up out there, I felt like I was passing cars. I had good grip and I could rotate pretty good. I was really happy with it," he said. "I'd say they'll have (the track conditions) a lot different (Saturday), so we're going to see a couple of different sides of this place for sure. My car's been pretty good here in the mud lately, so hopefully we can turn around and have it good for the slick. We'll see what we can do."

The race was slowed by nine yellow flags, including for the cautions that saw the demise of Madden and Marlar, who headed pitside after his lap-41 scrape with Winger.

"I really think I could've won the race there," a disappointed Marlar said, saying he "got run over" by Winger.

On the ensuing restart, Winger broke exiting turn four, collecting Ricky Thornton Jr., and another quick caution appeared when Thornton Jr. spun in turn one after pitting to make repairs.

Other cautions appeared for a slowing Ryan Gustin on the ninth lap and a same-lap slowdown when Tyler Erb had a pair of flat rear tires. A lap-15 caution flew for a slowing Cla Knight (shock issue) and a lap-21 yellow appeared when Sam Seawright slowed with body damage after running as high as sixth.

The final caution appeared on the 49th lap when Ricky Weiss had a right-rear flat and stopped between turns three and four.

Notes: After leading the first eight laps of the first heat race, Dennis Erb Jr. of Carpentersville, Ill., pulled-in after a late caution and went to the scales early, apparently thinking the race had ended. Erb Jr. tagged the field but could only recover to finish fifth in the final two laps, but transferred to the feature by winning a consolation race. ... Among drivers failing to make the feature lineup: Hall of Famer Scott Bloomquist (problem with hia steering rack while running second in a consolation), David Breazeale (broke driveshaft leading a consy), Devin Moran (who failed too transfer by one spot in a consy in his Jeremy Bullins-owned ride), Mason Zeigler, Payton Freeman, Austin Horton, Joseph Joiner, Morgan Bagley, Pearson Lee Williams and Parker Martin. ... To battle the tropical storm, the track used tarps to cover the surface before the rain Thursday and used a helicopter to help dry the surface Friday. ... The night's program was hampered because of the difficulties in removing disabled cars from the track. Tow trucks couldn't get enough traction and a skid-steer was employed to pull cars pitside.