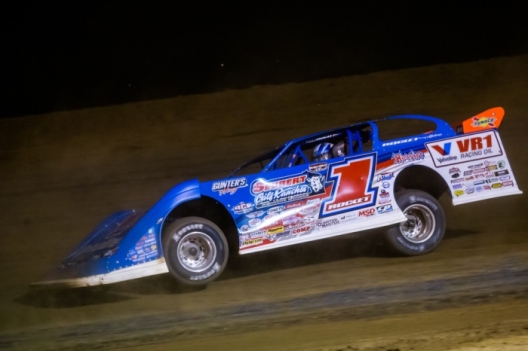 ZANESVILLE, Ohio (July 3) — Brandon Sheppard arrived at Muskingum County Speedway for the Elite Munitions Freedom 60 weekend mired in an extended big-money drought. He left Sunday night feeling like he just might have finally turned a corner.

Smiling brightly after leading all but the first two circuits to capture a 60-lap Lucas Oil Late Model Dirt Series feature worth $30,000, the 29-year-old star from New Berlin, Ill., and his Rocket Chassis house car team seemed to be regaining their vintage form.

“I sure hope this weekend turned us around,” Sheppard said. “It was really good to have a really good feel underneath me again all weekend long here. We’ve got a really fast race car and my hopes are high.”

Sheppard, who started second after winning a 20-lap semifeature on Saturday night, overtook polesitter Ricky Thornton Jr. of Chandler, Ariz., for the lead on lap three and never looked back. He adeptly handled seven restarts — six coming over the race’s first 29 laps — to beat Hudson O’Neal of Martinsville, Ind., to the finish line by 2.064 seconds.

Thornton, who won a 20-lap semifeature on Saturday, settled into second behind Sheppard after leading laps 1-2 until a flat right-front tire caused him to bring out a caution flag on lap 29. He rallied to salvage a ninth-place finish.

Sheppard’s victory marked his first winner’s check of at least $30,000 since he pocketed $100,000 for the October 2020 Dirt Track World Championship at Portsmouth (Ohio) Raceway Park. He didn’t win a race worth more than $15,000 in 2021 and his nine overall victories this season before the richest event in Muskingum County’s history was a $22,022 Castrol FloRacing Night in America success on May 11 at Spoon River Speedway in Banner, Ill.

The last four high-paying Lucas Oil Series weekend were especially frustrating for Sheppard, who didn’t contend in the Show-Me 100 at Lucas Oil Speedway in Wheatland, Mo. (finished 12th), the Historic 100 finale at West Virginia Motor Speedway in Mineral Wells (14th) and the Mountain Moonshine Classic at Smoky Mountain Speedway in Maryville, Tenn. (ninth) and finished fourth after starting from the pole in June 25’s Firecracker 100 at Lernerville Speedway in Sarver, Pa.

Sheppard showed signs of emerging from his struggles Saturday when he led from flag-to-flag to claim a $3,000 semifeature prize. He parlayed that run into an even stronger performance in Sunday’s headliner.

“We’ve been all over the board trying to find some speed,” Sheppard said. “Mark (Richards) and the (Rocket) guys have been really working their tails off. We kind of got back to what we know here and it’s really good, so I’m really looking forward to this whole next couple months coming up. I’m feeling really good about everything.”

Indeed, Sheppard was peerless in the 60-lap feature. He turned back some restart threats from Thornton during the race’s first half before stepping away from the 21-year-old O’Neal over the final 11 circuits.

“We had a really maneuverable race car I felt like,” said Sheppard, who was victorious for the first time in Lucas Oil Series action since he won four features during Georgia-Florida Speedweeks in January and February. “The first few laps there, me and Ricky (Thornton), I didn’t really know if I needed to be all the way tucked in the bottom or if I needed to kind of sweep out a little bit. I was kind of feeling it out, but I know from the past few races that getting the lead early was gonna be key so I really wanted to get the lead and at least let it play out after that.

“McCreadie got out to the lead (June 25) at Lernerville and I never could catch him after that, so I was hoping I could get the lead and hang on. Our car was really good and we held ‘em off.”

Sheppard, who extended his Lucas Oil Series points lead over McCreadie, hailed the Moran family for putting up big money at their 3/8-mile Muskingum County oval.

“The Morans did a heck of a job at this racetrack,” Sheppard said. “Heck of a crowd out here. The racetrack was awesome.

The fourth-starting O’Neal made his move late, charging around the outside of Erb through turns one and two on the final restart with 11 laps remaining.

“I knew I had a shot at second, but Shepp was pretty good,” said O’Neal, who is still searching for his first Lucas Oil victory of 2022. “We had a good, strong weekend here, and we gave it a good effort on that last (restart). I sent the top down here as hard as I could trying to just get a shot at him, but I got a little free there at the end and lost a little drivability into three.

“We’ll keep working. We’re putting together some decent runs, a lot better than we have been, so we can’t be too upset about a second place.”

Erb, 25, inherited second when Thornton pitted on lap 29 but couldn’t find a way to deal with Sheppard.

“Shepp did a great job there,” Erb said. “He never let me get a good run on them restarts, and then with 11 to go there I had one restart and I kind of had to make a decision. I was gonna try to go to the top but he turned down just enough to where Hud was able to get next to me and I gave away second.

“But I feel like we gave it a valiant effort. I tried every line, slide, no slide, turn down you could do. I just wasn’t quite good enough to get by Shepp unless he would’ve got in traffic or something.”

Six of the race’s seven caution flags flew during the race’s first half. Doug Drown brought out the first, on lap three, when he slowed with a flat left-rear tire. Hometown favorite Devin Moran triggered a caution on lap 17 when he pulled up lame while fourth due to a damaged nosepiece while Clint Keenan and Dustin Smith tangled in turns three and four on lap 19 in the event’s only multi-car incident.