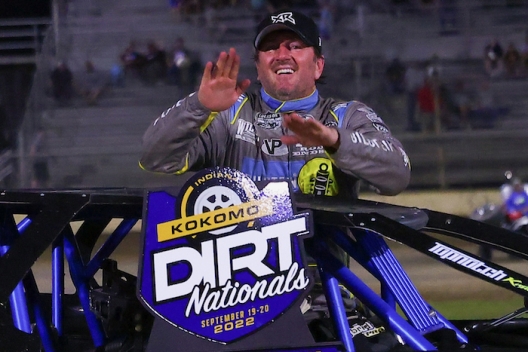 KOKOMO, Ind. — Tim McCreadie was proud of the appearance of his 4-race-old Paylor Motorsports Longhorn Chassis Tuesday at Kokomo Speedway. The 48-year-old Watertown, N.Y., driver was event prouder to display his speedy machine in victory lane after scoring his first victory in more than two months.

"We got it to run as good as it looks,” McCreadie said, “because it's a beautiful looking piece.”

McCreadie outdueled fellow Longhorn Chassis driver Jonathan Davenport in the final stages of the XR Super Series 60-lap main event at the quarter-mile oval, sliding underneath the polesitter and race-long leader en route to a $40,000 payday in the weeknight affair. He notched his second XRSS victory of the season and seventh overall in taking the checkers 1.518 seconds ahead of Davenport.

Monday’s $20,000 feature winner, Shane Clanton of Zebulon, Ga., started 11th and briefly broke into the top 10 but faded to finish 15th. Brandon Overton of Evans, Ga., for the second night in a row dropped eight positions after starting in the front row.

McCreadie was two days removed from breaking an engine in the finale of the 18th annual Lucas Oil Late Model Knoxville Nationals in Knoxville (Iowa) Raceway and wasn’t a serious contender in finishing sixth Monday at Kokomo. But he credited his Donald and Gena Bradsher-owned team with keeping the faith.

“Hats off to this Paylor Motorsports team. It's been no secret, this hasn't been easy this year. We've got some wins, but far too many times we’re sixth. Coming here tonight and struggling last night and working hard today just shows how good” the team is, McCreadie said in victory lane. "We popped a couple motors and (the Bradshers are) like, 'Well, what do we got to do to get better? Do we need another motor?’ They’re all in 100 percent, man. .. It's a joy to be in this car. I just wish I could be better, as good as” the rest of the team.

Starting fourth, McCreadie held the third spot early and took the second position from Overton on the 19th lap while Davenport led the way from his pole position. McCreadie stayed within striking distance and then moved into to challenge the leader in the final 20 laps while Thornton was threatening the frontrunners from the high groove.

“Leading that many laps, it's just hard to know where to be and I figured if I poked (Davenport) once up there, maybe I could get them off the bottom,” McCreadie said. “He moved up and then he started to move up around lapped cars, and I just thought maybe it's my chance.”

Once McCreadie worked underneath Davenport, he didn’t have an answer as McCreadie edged away in the final laps.

“It just kept getting crumbier and crumbier in the middle and I kept getting tighter the lower we had to get. But (McCreadie) done excellent job. You know, I was just kind of stuck there. I didn't know whether to go to the top or the bottom,” Davenport said. “I tried to run through the middle like I was earlier in the race, but the crumbs were just too thick and it was the worst there. Hey, I ain’t going to (hang) my head over second. We've had excellent car and Timmy done a great job, so I’m glad for him to get the win if we couldn’t.”

Madden, whose team had to repair a broken fan felt following hot laps, charged from the eighth row but wasn’t close enough at the end to catch the frontrunners.

“We had a good race car — actually a great race car in that feature right there. We just buried ourselves every day qualifying … “We’ve been pretty decent, but just (didn’t get in the) position we needed,” said Madden, a six-time XRSS winner in 2022. “We were really good. We're usually not that good and that kind of condition (but) we were really good tonight. We've had one of those days. I just like to thank my three guys right there with me. They've stuck it out and hadn't give up on us and they work hard and I appreciate it.”

Two cautions slowed the action in the 60-lapper, both for minor incidents. A lap-three caution appeared for debris and a lap-19 caution appeared when Daulton Wilson slowed with oil-pump belt issues.

Notes: McCreadie’s victory was his first since July 19 in Lucas Oil Late Model Dirt Series action at Huset’s Speedway in Brandon, S.D. … He’s leading Lucas Oil Series points in chasing back-to-back titles on the national tour. … Bobby Pierce, who broke a motor in Monday's hot laps and headed to his Oakwood, Ill., shop, decided to install another powerplant and head back to Kokomo for the finale. Alas he discovered another minor engine issue and, after qualifying for the main event, elected to start on the tail and take a single lap. … Monday's winner Shane Clanton clipped the wall in Tuesday's time trials and had to make hasty repairs of his right-front lower control arm before heat action. ... Chris Madden broke a fan belt in hot laps and scrambled to make repairs before time trials (with Tyler Erb and his crew chief Randall Edwards among those assisting).   … Among drivers failing to transfer to the $2,500-to-start feature lineup through prelims: Devin Gilpin, Jason Feger, Rusty Schlenk, Kent Robinson, Jake Timm, Jeff Smith and Mike Mataragas.