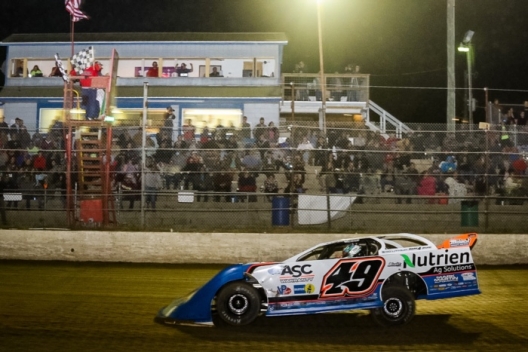 Chris Anderson
Jonathan Davenport takes the checkers for his $40,000 victory.
What won the race: Jonathan Davenport of Blairsville, Ga., took the lead with an inside move out of turn four on lap 45 and paced the final five circuits to win Saturday's $40,000 Sunshine State 50 feature at All-Tech Raceway. Davenport earned his fifth XR Super Series victory to go along with the inaugural championship. Davenport's 24th win of the year brings his total race winnings to $2,002,700 by his count.
Quotable: “Yeah ain’t that crazy, I can’t even put it into words what this team has been able to accomplish this year,” Davenport said. “Started out the year wasn’t that great in Florida and then we left and come back and this was my first win of the season (at All-Tech) with the XR Series and it’s cool to cap it off with the last win of the season with the XR Series.”
Key notes: Runner-up Brandon Overton of Evans, Ga., led laps 23-34 and 38-39 aboard a Kevin Rumley-owned Longhorn Chassis designated for research and development purposes. ... Joseph Joiner advanced nine positions and earned his second third place finish of the weekend. ... Polesitter Mark Whitener of Middleburg, Fla., led the opening 14 laps, as well as laps 35-37 and 40-44 before fading to finish fifth. Whitener, who led the most laps for the second consecutive night, said he used a harder tire compound than Davenport. ... After winning Friday's $20,000 opener, Ashton Winger of Hampton, Ga., failed to make it out for qualifying, but recovered to finish sixth. ... Nine-time Super DIRTcar champion Matt Sheppard recorded finishes of 11th and 13th this weekend aboard the Big Frog Motorsports entry. ... Friday's runner-up Tim McCreadie hit the wall in his heat race and failed to finish, requiring a tow off the track. McCreadie used a provisional and worked his way to fifth before slowing to a stop on lap 37, relegating him to finish 18th. ... Saturday's feature, the season finale for the XR Super Series, was slowed by three cautions and lasted 23 minutes, with 13 drivers completing all 50 laps.
On the move: Joseph Joiner of Milton, Fla., started 12th and finished third.
Winner's sponsors: Davenport’s Double L Motorsports Longhorn Chassis is sponsored by Nutrien Ag Solutions, ASC Warranty, Spartan Mowers, Lucas Oil, Mega Plumbing of the Carolinas, VP Racing Fuels, Bilstein, Hoosier Racing Tire, Midwest Sheet Metal and K1 RaceGear.
Points chase: Before All-Tech Saturday: 1. Jonathan Davenport (1,850); 2. Shane Clanton (1,575); 3. Chris Madden (1,536); 4. Brandon Overton (1,440); 5. Kyle Strickler (1,416); 6. Jimmy Owens (1,231); 7. Tim McCreadie (1,190); 8. Scott Bloomquist (938); T-9. Ricky Weiss (920); T-9. Brenden Smith (920).
Current weather: Clear, 61°F
Car count: 28
Fast qualifier: Mark Whitener
Time: 18.623 seconds
Polesitter: Mark Whitener
Heat race winners: Mark Whitener, Jonathan Davenport, Brandon Overton
Consolation race winners: Jason Garver
Provisional starters: Tim McCreadie, Jesse Enterkin
Next series race: February 20, All-Tech Raceway (Ellisville, FL) $20,000
Editor's note: Results and race details are unofficial.
From staff reports

ELLISVILLE, Fla. — Of course Jonathan Davenport would win his last race of the 2022 season, because how could the year's script fade into the black any different?

Superman again pulled through in the nick of time Saturday at All-Tech Raceway, as the sport’s dominating force had his way one last time in the XR Super Series Sunshine State 50, leading the final six laps to pocket another handsome payday of $40,000.

By Davenport’s count, the performance pushed him over the $2 million mark in a history-making season that ends at 24 wins with nine of those wins paying $40,000 or more.

“Ain’t that crazy? I can’t even put it into words, what this team has been able to accomplish this year,” Davenport said. “We started out the year not that great in Florida. We left and came back, and (got my) first win of the season with the XR Series (on April 23 at All-Tech). It’s cool to cap it off with a last win with the XR Series. I have to thank my guys, Jason (Durham) and Tyler (Braggs). Vinny (Guliani) is back at the shop. Cory (Fostvedt) is here with me.

“As everybody knows, this is Jason’s and Tyler’s last race with me. Kind of bittersweet; I hate to see them go. I also understand why. We’re going to keep on digging and see if we can’t do a little better next year.

Though he started from the front row, the 50-lap feature in and of itself didn’t play out like many of the features Davenport’s won from the front row this year. Davenport ran fifth for a good portion of Saturday’s main event and didn’t have a clear shot at the win until with nine laps remaining.

All-Tech regular Mark Whitener of Middleburg, Fla., seemed poised to win the biggest race of his career, leading a race-high 22 laps from the pole and overcoming a multi-second deficit to hustle back to the lead with under 10 laps remaining. A harder tire compound selection, however, caved Whitener’s chances, as Davenport leveraged the bottom to his advantage, powering into the lead on lap 45.

As a result of getting all he can around the top side of the half-mile, Whitener broke a j-bar in the rear suspension and tumbled down the leaderboard to finish fifth.

“I went with a hard tire and I know Davenport was on a soft tire. I think Overton was on a soft tire. So, I don’t know if I cut my edges off my tire and my car gave up. I was on the bottom, and I was trying to be patient. I was on the bottom, and they got up under me to try and pass me, so the only thing I has to do was get up on the top and see if I can run it out around the top. I gave it everything it was worth. I just came up short.”

Brandon Overton of Evans, Ga. — driving a Longhorn Chassis research and development car fielded by Kevin Rumley — led 14 laps and finished second. Overton battled Whitener hard in the closing laps, and in hindsight wish he purposely let Whitener ahead by a few car lengths with hopes he’d use up his tires.

“I think I just did a crappy job driving there,” Overton said. “I kept seeing Whitener roll around the top. I actually passed him back cutting the middle off and catching the brown leaving (the corner). I probably just should have stayed where I was at and let him try to get up there and do what he was going to do — get his tires hot and then drive back by him. I didn’t, so we’ll take our second.

“It’s been a fun weekend. It’s a pleasure to drive this thing, work with Kevin and all his boys I appreciate everything they’ve done for us this weekend and we’ll look forward to the schedule.”

Milton, Fla.’s Joseph Joiner, meanwhile, finished third after rebounding from a mishap in qualifying in which he busted the power steering line following contact with the outside wall. Joiner labored through his heat with no power steering and finished fourth, which started him 12th in the main event. Fortunately for he and the Hunt The Front team they revived their power steering and Joiner was able to pass Kyle Bronson and Whitener on the last lap to round out the podium.

“I can’t believe I’m up here tonight. I thought I was going to get start-and-park money and just go back to the truck. I couldn’t drive it, and here we are up here on the podium. Just had some things go our way there through the race to be on the bottom and be able to pass a few cars.”