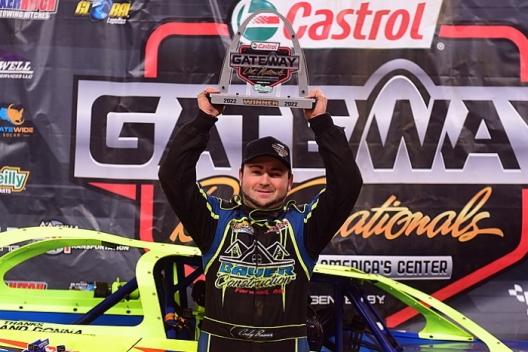 Todd Boyd/photosbyboyd.smugmug.com
Cody Bauer holds his trophy after winning Friday night's 25-lap preliminary feature.
What won the race: Narrowly denying all challengers, second-starting Cody Bauer of Farwell, Mich., paced all 25 laps from the outside front row to capture Friday's Castrol Gateway Dirt Nationals preliminary feature at The Dome at America's Center. He survived a two-to-go bid from Garrett Alberson and beat Wil Herrington to the finish line by 0.483 of a second for the $5,000 top prize.
Quotable: “It really doesn’t (feel real)," an emotional Bauer said. "Honestly, just getting into a Late Model four years ago, I would’ve never thought in a million years that I’d be standing here right now. That one (last caution) with four to go got me on edge for sure, but the ones early on, when we were catching lapped traffic, they definitely helped me.”
Key notes: The seventh-starting Herrington, of Hawkinsville, Ga., moved into the runner-up position on the final lap after Alberson clipped the backstretch wall challenging Bauer for the lead on lap 23; Alberson's Roberts Motorsports car sustained rearend damage and he fell to a 15th-place finish. ... Tyler Erb moved into second place in the early laps before clinging to the back of the top five, then recovered to finish third and claim the final transfer spot to Saturday's 40-lap, $30,000-to-win finale. ... Jadon Frame advanced five positions and finished fourth. ... Devin Moran spun from eighth place on lap 19 and finished 16th. ... Following a scoring error in the second consolation race, Kenny Collins was given a promoter's provisional. He started 19th and finished 17th in the feature. ... The fourth heat lasted 20 minutes and was slowed by several incidents, with the largest unfolding when Tyler Carpenter pinched Hudson O'Neal into the turn-two wall while battling for the lead, triggering a chain reaction of hard hits among four cars. O'Neal, his car already heavily damaged, expressed displeasure and spun Carpenter under yellow, cutting Carpenter's left-rear tire and ending his heat race. O'Neal was disqualified for the evening due to his actions. ... Carpenter came back to qualify through a B-main and finished fifth in the feature. ... Four cautions slowed the 12-minute feature: on lap 10 (Jesse Lowe), lap 16 (Carson Hocevar), lap 19 (Devin Moran and Steve Sheppard Jr.) and lap 21 (Jason Welshan).
On the move: Tyler Carpenter of Parkersburg, W.Va., started 18th and finished fifth.
Winner's sponsors: Bauer’s Domination Race Car is powered by a Wall2Wall engine and sponsored by Tommy Bauer Excavation, Pro Grade Concrete, S&S Collision, Blue Wrench Repair and Fab, Otto’s Retreat, C-N-T Services, Bauer Construction and Chrisman Heating & Cooling.
Car count: 54
Fast qualifier: Tyler Erb
Time: 11.444 seconds
Polesitter: Garrett Alberson
Heat race winners: Tyler Erb, Cody Bauer, Jesse Lowe, Jon Lee, Garrett Alberson, Patrik Daniel
Consolation race winners: Devin Moran, Mike Spatola
Provisional starters: Kenny Collins
Editor's note: Results and race details are unofficial.
From staff reports

Narrowly denying all challengers, second-starting Cody Bauer of Farwell, Mich., paced all 25 laps from the outside front row to capture Friday's Castrol Gateway Dirt Nationals preliminary feature at The Dome at America's Center. He survived a two-to-go bid from Garrett Alberson and beat Wil Herrington to the finish line by 0.483 of a second for the $5,000 top prize.

Mayhem broke out during the fourth heat when Hudson O’Neal’s attempt to overtake Tyler Carpenter for the lead on an opening-lap restart ended with the Martinsville, Ind., driver slamming the outside wall at the turn-two track exit and then spinning Carpenter in frustration during the ensuing caution flag.

After two unsuccessful attempts to start the race, O’Neal had a run on Carpenter off the top of turn two. O’Neal ran out of room as Carpenter slid up the track, however, forcing the 22-year-old’s Roger Sellers-owned Double Down Motorsports machine into the Jersey barrier and catch fence at the opening to the pits. As Carpenter motored away, O’Neal absorbed a hit to his car’s rearend from Kyle Lear and Jon Lee contacted Lear’s machine.

Limping off from the scene with heavy damage to his car’s front and rear, O’Neal tracked down Carpenter just past the starter’s stand on the homestretch and spun the West Virginian around with a blast to the left-rear corner. The contact flattened Carpenter’s left-rear tire, sending him out of the race with O’Neal.

Tensions were high in the pit area with the Carpenter and O’Neal teams exchanging words as a large crowd of bystanders looked on, but Dome security and police officers stationed themselves at both pit stalls and the situation soon calmed down.

O’Neal was disqualified from further action on Friday by Gateway Dirt Nationals promoter Cody Sommer for hitting Carpenter under caution, but he said the damage to his car’s front end was too extensive for him to make repairs for a B-main. He was also not expecting to race in Saturday’s finale.

Carpenter, who was credited with a fourth-place finish in the heat because only three cars remained running after the incident (Lee recovered from his involvement in the tangle to win the race), did not see much damage to his car and was planning to take a shot at transferring to the preliminary feature through a B-main.

Fifty-four of the 72 competitors pre-entered for Friday’s preliminary program have signed in for the second night of the sixth annual Castrol Gateway Dirt Nationals, putting the 2022 car count at an event-record 119. The previous high car count was 97 for the inaugural weekend in 2016. … Temperatures outside the Dome have risen to the low 50s and conditions remain dry but winds have picked up considerably. … After the surface of the Dome’s temporary fifth-mile oval turned out hard and much smoother than expected for Thursday’s preliminary card, observers noted before the start of Friday’s hot laps that it appeared the track-prep crew had added more water to the dirt in hopes of providing racers a speedway with more moisture and grip. … Two of the three winners of the Gateway Dirt Nationals finale — Scott Bloomquist of Mooresburg, Tenn. (2016) and Tyler Carpenter of Parkersburg, W.Va. (2019 and ’21) — are in Friday’s field. … Bloomquist experienced immediate trouble when he hit the track for hot laps; he limped into the infield due to a starter issue without completing a circuit at speed. … Hudson O’Neal of Martinsville, Ind., is bringing to end his two-year run as the driver of Roger Sellers’s Double Down Motorsports machine with his first Gateway Dirt Nationals appearance since 2017 when he won a preliminary feature and finished 17th in the finale. … Another high-profile driver returning to the Dome after a long absence is Devin Moran of Dresden, Ohio, who is piloting fellow Ohioan Rick Mardis’s Kryptonite No. 2 in his first event start since his 20th-place finish in the 2016 inaugural. … NASCAR Truck Series regular Carson Hocevar of Mooresville, N.C., is among Friday’s entrants. … Donald McIntosh of Dawsonville, Ga., is racing as a teammate to Joe Denby of Tullahoma, Tenn., in his first career Gateway Dirt Nationals start. … After watching his star son Brandon Sheppard finish seventh in Thursday’s preliminary feature, Steve Sheppard Jr. of New Berlin, Ill., is carrying the family’s mantle on Friday. The elder Sheppard, who plans a return to semi-regular competition in 2023, is competing at the Dome for the first time. … Nicky Pennington of Morehead, Ky., is making this Dome debut behind the wheel of a No. 95 machine sporting a Lightning McQueen-lookalike scheme.