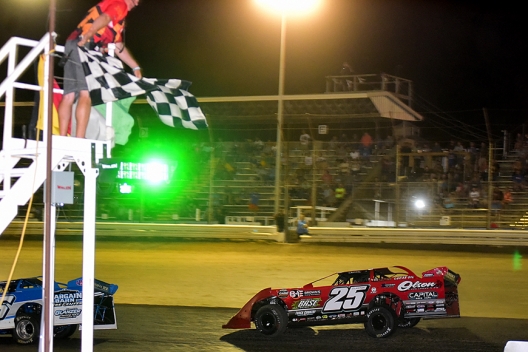 Because of safety concerns over tire blistering and overheating engines, XR officials late Monday night announced that Tuesday's finale would be held on the quarter-mile layout. It didn’t take Clanton, the 2015 World of Outlaws Case Late Model Series champion, very long to show why he’d been anxiously licking his chops.

The Georgia Bulldog had every right to be salivating.

Clanton, who started third in Tuesday’s feature after winning the third heat, grabbed the lead from Monday winner Jonathan Davenport of Blairsville, Ga., as they raced through traffic on lap 10 and led the final 41 laps for his first career victory with the upstart XR Super Series. He finished two seconds ahead of seventh-starting Chris Madden of Gray Court, S.C., while Davenport slipped to third after leading the first nine laps from his outside front row starting position.

Both Chris Ferguson of Mount Holly, N.C., who finished fourth, and Gordy Gundaker of St. Charles, Mo., who finished fifth, improved their starting positions by one spot in the event that drew 24 entries. Gundaker, who didn’t compete in Monday’s race, made the seven-hour haul overnight after hearing that the event had been switched to the quarter-mile.

While Gundaker and his crew were traveling west, Clanton and his team were still hard at work. Clanton tagged the wall hard in his heat race during Monday’s program, damaging the right front suspension of his Capital Race Car.

He finished eighth in Monday’s feature and then decided to overhaul his primary machine before Tuesday’s show. The work was worth it as he steered the newly-rebuilt Capital to the third-richest win of his career behind the $100,000-to-win Dream in 2012 and the $41,000-to-win World 100 in 2008, both at Eldora Speedway in Rossburg, Ohio.

Madden, runner-up for the second night in a row, said before the race that he’d prefer to run on the big track. He was pleasantly surprised however with how the small oval raced. After starting seventh, he joined the top five on lap eight and then bounced back and forth from fifth to fourth over the 14 laps before securing third on lap 22.

Madden finally wrestled second place away from Davenport on lap 38. Trailing by 2.204 seconds, Madden managed to trim Clanton’s lead down to just 0.610 of a second with five laps remaining. But Clanton was able to dispatch a lapped car and eased away again.

“Actually (the track) turned out better than what I thought it was going to,” Madden said. “It got supersonic slick and raced really well before it started taking on a little bit of grip at the end. We didn’t draw well these two races and it put us behind qualifying, but overall we had a super race car tonight.

“We had a good car. We caught a lapped car there and that (allowed) Shane to get away from us. There wasn’t but a few laps to go and we didn’t want to chance anything.”

Clanton had to squeeze by a couple of lapped cars on more than one occasion, but never seemed in jeopardy of losing the lead.

“We ain’t running fast enough to hurt somebody if you touch somebody, but it was definitely elbows up getting through lapped traffic there,” Clanton said.

Despite leading early and losing the lead when he got boxed in in traffic, Davenport conceded that both Clanton and Madden “were both a little better than we was.”

“I could have probably just held them off if we was running single file, but traffic seemed like every time I’d try to get under (a slower car) they would want to hug the bottom and then I’d try to go to the outside and they’d decide to move up,” said Davenport. “It is what it is. We made some changes and I couldn’t figure out how to drive it correctly and (we) were just off a little bit. But we still ran in the top three. Congratulations to Shane and Madden. They both did a good job.”

Notes: Polesitter Jimmy Owens of Newport, Tenn., lost several positions early after he slipped off the track in turn two. He had an off-track excursion in turn four later in the race and fell back to 12th at the finish, one lap down. … While 16 cars were running at the finish, nine of the 24 starters completed all 50 laps. … The race was slowed by two cautions. Joseph Gorby of Bartletsville, Okla., spun on lap 18 and Kyle Strickler of Mooresville, N.C., spun on lap 19. … Three drivers — Charlie McKenna of Ames, Iowa; Andrew Kosiski of Lavista, Neb.: and Tad Pospisil of Norfolk, Neb. — entered both the XRSS event and the $5,000-to-win Malvern Bank Series event. Pospisil’s seventh-place finish was tops among the three. … Gordy Gundaker, Jacob Magee, Dustin Walker and Adam Popp joined the program after not competing on Monday.