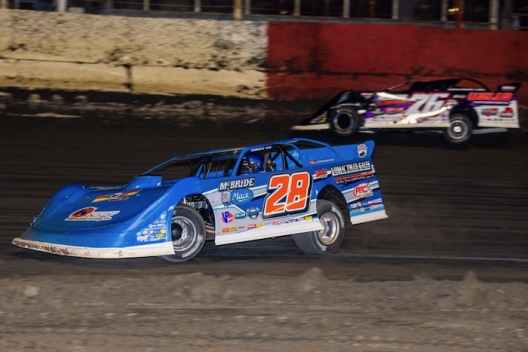 GIBSONTON, Fla. — There are drivers who stick with the low groove. And then there's Dennis Erb Jr.

So when the 49-year-old Carpentersville, Ill., driver was scheduled to start outside the front row Monday at East Bay Raceway Park — a night when the outside groove was tenuous at best — it didn't bode well.

Indeed a poor start dropped Erb to fourth after one lap, then back to the fifth position a lap later as pole-starting Brandon Overton streaked away from the field.

But settling into the low groove, Erb valiantly rallied back, grabbed second on the 11th lap and then wedged under Overton in turn one on the 19th lap and led the rest of the Wrisco Winternationals opener on a night when 70 Lucas Oil Late Model Dirt Series competitors packed the pits.

"It feels really good," Erb said following his seventh Winternationals victory and first since 2015. "We've struggled here in the past for a while, we've always had some good cars running up front. ... (We) fell back a little bit, but the car was working real good and we battled our way up there for the lead."

Overton, the Evans, Ga., driver who led the first 18 laps, fell back to fifth after losing the lead to Erb, but raced back to second on lap 25 in a last-ditch attempt to make the high groove pay off. He pulled within two-tenths of a second of Erb, but his Wells Motorsports entry slid into the turn-two wall, ending his race.

Erb kept his cool despite his poor start.

"I was a little worried there at first, getting stuck out there (in the outside groove) and falling back. The racetrack was a little dirty up there and I really couldn't get going," he said. "But once I got back in line and I started rolling back up there and watching them guys push out (in the corners) a little bit ... my car was really good around that bottom. I was able to get back up to second and, the same thing with (Overton) there, I watched him going into (turn) one there and he kind of shoved up a little bit, and I was able to get underneath him."

Erb impatiently endured the late cautions in waiting for the checkered flag.

"I was just trying to hit my marks there at the end," he said. "You know, I knew that we had a strong field behind us and the longer the race was, my car was better. I just really didn't want to see them cautions at the end, but we were at least able to hang on there."

He dedicated the victory to late Hall of Famer and legendary chassis builder C.J. Rayburn, whose cars he drove for many years, including his 2009 and '14 victories at East Bay.

"Not having him down here this year, it's hurts a lot," Erb said, "but this one here is for him."

O'Neal, who was just the 22nd quickest qualifier in his 35-car time trial group, was glad to salvage the night, even if he couldn't duplicate his opening-round Winternationals victory from 2021. He started inside the second row and was never worse than fourth, but he couldn't find a way to the front.

"We'll take a second from how our night started," said O'Neal, congratulating Erb and his crew chief Heather Lyne for the victory. "You know, we had a good race car and we were able to get up there to Dennis a couple of times and the caution would come out or lapped traffic or whatever. So we'll give her another shot tomorrow."

McCreadie scored his second straight podium finish in working his way forward, including a jump from 11th to eighth on the first lap.

"Restarts were tough. My car just had no instant grip, so the last little bit I just tried to do the best not to mess up," he said. "I messed up like three laps in a row and Devin (Moran) got by me and actually showed me what I should've been doing the whole time as far as getting through (turns) one and two."

Besides the lap-26 caution for Overton, the 30-lapper was slowed by three other yellow flags, the first one at halfway when 17th-running Tyler Bruening slowed with nosepiece damage. Two more appeared on laps 23 and 24 when Tanner English ended up facing the wrong direction in turn two and again in turn two when third-running Ashton Winger spun in the high groove.

Action returns Tuesday evening for the second round of Wrisco Winternationals and another $5,000-to-win program. Hot laps are scheduled for 5 p.m. with racing at 7 p.m.

Notes: Erb has nine career Lucas Oil Series victories, seven of them at East Bay. ... All but one his eight career Georgia-Florida Speedweeks victories have come at East Bay; he won at Volusia Speedway Park in Barberville, Fla., in 2012 on the World of Outlaws Late Model Series. ... Series points leader Devin Moran of Dresden, Ohio, was seventh for his worst finish of the season (the previous worst was fourth). He ran second early but faded in the second half of the race. ... Fourth-finishing Shane Clanton was the highest finishing driver who hasn't won at East Bay. ... Twenty-three drivers completed 30 laps.

Opening night of the Wrisco Winternationals comes on a day that saw skies turn sunny in the afternoon with temperatures reaching the high 60s. The weather should remain dry throughout the evening, but forecasts are calling for an extended period of rain beginning overnight and stretching most of Tuesday, threatening Night 2’s action. … Monday’s field numbers 70 entries, down a bit from last year’s 76-car opening-night turnout. … Several drivers are expected to join the action as the week progresses, including Frank Heckenast Jr. of Frankfort, Ill., whose hauler is in the pit area, and the Pennsylvania-based team of Boom Briggs and Josh Richards, who are expected to begin racing on Wednesday. … Teams that participated in Sunday night’s open practice reported an extremely slick East Bay surface. … Among first-time East Bay Winternationals competitors are Garrett Alberson of Las Cruces, N.M., Daulton Wilson of Fayetteville, N.C., Max Blair of Centerville, Pa., Cody Overton of Evans, Ga., and Dale Hollidge of Mechanicsville, Md. … Michael Lake of Uniontown, Pa., is making his first Winternationals appearance since 2018. The soon-to-be 21-year-old driver is behind the wheel of his grandfather Bobby Lake’s familiar No. 27. … Jimmy Mars of Menomonie, Wis., is spending the week turning wrenches for teenager Drake Troutman of Hyndman, Pa., who is climbing into his MB Customs Late Model after racing East Bay’s UMP modified Winternationals a couple weeks ago. … Freddie Carpenter of Parkersburg, W.Va., whose 2021 Winternationals assault was marred by a wild series of flips early in the week, is back at East Bay debuting a new Kryptonite machine. … World of Outlaws Late Model Series technical director Kenny Kenneda is in East Bay’s pit area collaborating with Lucas Oil Series tech head Steve Francis as the tours continue working to implement standardized Dirt Late Model rules, including the deck height/droop rule.