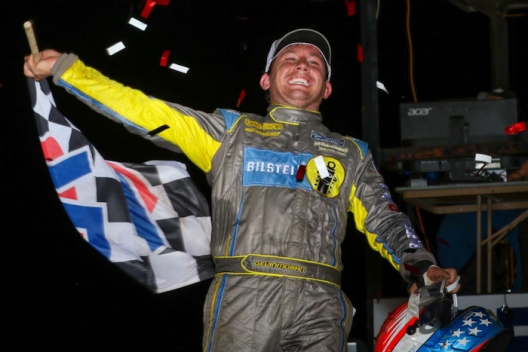 Turning back challenges from Brandon Sheppard early and Bobby Pierce late, the 26-year-old standout from Dresden, Ohio, led all but one circuit en route to matching his career-high payday with a $30,000 victory in Saturday night’s 70-lap Hoker Trucking Quad Cities 150 finale at Davenport Speedway.

After calmly controlling a final restart with five laps remaining, Moran beat Brian Shirley of Chatham, Ill., to the finish line by 1.162 seconds for his fourth World of Outlaws Morton Buildings Late Model Series triumph in limited appearances during his true breakthrough 2021 campaign.

“It’s just surreal,” said a beaming Moran, whose visit to the quarter-mile fairgrounds oval for the WoO tripleheader also included a $10,000 checkered flag in Thursday’s opener and a third-place finish in Friday’s A-main. “This is tied for the biggest paying win I’ve ever had (with his 2018 Prairie Dirt Classic victory at Illinois’s Fairbury Speedway). I guess I’ll count it bigger because we won 10 (grand) on Thursday as well.”

Shirley, 40, never threatened Moran after reaching second place from his 15th starting spot with a lap-67 pass of Oakwood, Ill.’s Pierce. WoO regular Boom Briggs of Bear Lake, Pa., finished third — his season-high placing on the national tour — after slipping into the position on the final circuit while New Berlin, Ill.’s Sheppard, who led lap five, settled for fourth place while battling a loss of brakes for the last 50 laps and Pierce lost two spots on the last lap to complete the top five.

Chris Madden of Gray Court, S.C., moved into second on lap 61 with hopes of making a last-ditch run at Moran, but he went spinning in turn three on the 65th circuit when Pierce made contact with him from behind. Madden’s wheels never stopped, however, as the caution flag was displayed so he restarted sixth — where he blended into the field upon getting his car pointed in the right direction — and finished there.

Moran, who started from the pole position, shot his Tye Twarog-owned Longhorn Chassis into the lead at the initial green flag but was dogged immediately by the second-starting Sheppard. The three-time and reigning WoO champion nosed ahead to lead lap five, but Moran regained the top spot the following circuit and was scored the leader of every lap over the remaining distance.

But while Sheppard, 28, never made another serious run at Moran, the eventual winner still had to fight off two especially stiff bids from the 24-year-old Pierce. After grabbing second from Sheppard on lap 38, Pierce came oh-so-close to surprising Moran on lap 39 with an aggressive slider through turns one and two that had him ahead of Moran on the backstretch.

Alas, Moran crossed over Pierce off turn four to remain in front as lap 40 was recorded. Moran executed an almost identical move on lap 60 to again repel Pierce, who slid ahead of Moran in turn four but didn’t have enough traction to stay there.

“The middle (of the track) was just so good, it was so wet,” said Moran, maintained a short-but-steady edge over the final 10 laps. “With these 40s (hard-compound Hoosier tires), I didn’t know if we’d be able to go through that (middle lane) so long, and I just kept running it, running it. Then Bobby slid me and I ran the slider line in one and two and I picked up way more speed it felt like. From then on out I had a little bit of a gap the rest of the race.”

Moran was certainly thankful to see the checkered flag fly. He might not have been able to physically handle too many more circuits without experiencing a drop-off in speed.

“We lost power steering as the race went on and this was not the place to do that,” Moran said, noting the evening’s fast surface conditions. “So I’m, like, toasted right now.”

Moran wasn’t too tired, however, to enjoy his latest victory lane celebration with his team, including Twarog, his younger brother/crew chief Wylie and his girlfriend Lakia Hedman. His 12th overall triumph of 2011 was his third worth $22,000 or more and pushed his total first-place earnings for the season to $155,004.

Shirley spoke after the race more about rebounding from frustrating outings on Thursday and Friday than falling one spot short of the race’s $30,000 top prize. He was in need of a pick-me-up for his Bob Cullen-owned effort.

“I know we didn’t get a win, but it was sure like a win for us right now,” Shirley said after piloting his XR1 Rocket car forward from mid-pack. “It’s nice to just put in a good run to keep the fight. The first two nights here my head was between my legs. My buddy Kyle kept calling me and calling me every day telling me to quit being a pussy and just keep driving, and we’re gonna keep up and keep digging. Sooner or later we gotta find what we need and we’ll get back to winning.

“We’re just out here grinding. We’re not really 100 percent where we need to be. I don’t really know where I need to be right now, but (crewman) Aaron’s been working his ass off, my buddy (and former driver) Randy Korte come up tonight and helped us out … we’re just trying to figure out what we need to be this year. We’ve been off all year, but Bob and Lisa Cullen have given me every opportunity in the world to keep digging, keep fighting, and we’re gonna fight until we find where we need to be and the speed and stuff.”

The 50-year-old Briggs provided a feel-good story with his strong run to a podium finish from the 10th starting spot.

“I was just hoping for a top-five, and we got dicing a little bit there (for third) with my buddies Madden and Sheppard and I hope nobody’s mad,” Briggs said. “But it was really good racing and tight.

“Mark Richards, Rocket Chassis, them guys have been helping me a ton. Hell, Sheppard was welding on my car today (and) that thing was in the earth tonight.”

Noting that he was “whupped” after a long, hot day in Iowa, Briggs wore a big smile during postrace ceremonies as he sipped from a bottle of Busch Light and gave a shout out to his mother.

“This really for my mom at home,” Briggs said. “This week would’ve been four years that my dad’s been gone (the elder Briggs, a former racer, died in 2017), and I’m fortunate enough to do this because of my family … and mom, I hope you’re watching. I love you.”

There caution flags slowed the race. The first came on lap 37 when Cade Dillard slowed. Ryan Gustin triggered another caution on lap 57 when he developed a flat tire and Madden’s lap-65 spin caused the final slowdown.

Garrett Alberson flipped wildly over the berm in turns one and two on lap 10, bringing out a red flag. He wasn’t injured, but his Roberts Motorsports car sustained heavy damage after twisting and turning high in the air and coming to rest off the track.

Notes: Moran tallied his eighth career WoO triumph. … Jimmy Mars was battling for fifth on lap 49 when he slid over the berm in turns three and four and drove straight into the pit area. … Dennis Erb Jr. finished 10th after pitting during the lap-57 caution period. … WoO regular Ricky Weiss of Headingly, Manitoba, who finished seventh, was among eight drivers penalized for missing Saturday’s mandatory pre-race autograph session. Each driver who missed the session was relegated to the back of their heat race; others penalized were Garrett Alberson, Jeremiah Hurst, Richie Gustin Jr., Todd Cooney, Michael Guldenpfennig, Chris Kratzer and Lance Matthees.

World of Outlaws Series regular Ricky Weiss of Headingly, Manitoba, was among eight drivers penalized Saturday for missing the mandatory autograph session. Each driver who missed the session was relegated to the back of their heat race. For Weiss, that means he’ll start seventh in the first heat rather than fourth.