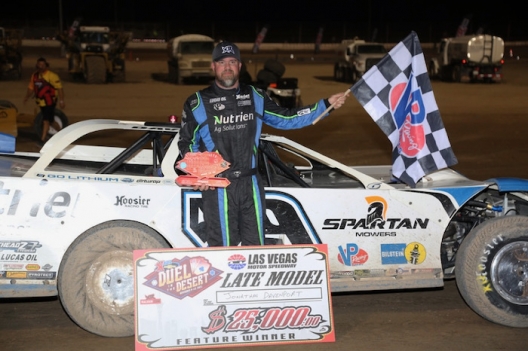 LAS VEGAS, Nev. — From one side of the country to the other, Jonathan Davenport has stretched his personal Super Late Model winning streak to three races in a row. It made the 2,224 miles between last weekend's World of Outlaws Morton Buildings Late Model Series events at the Dirt Track at Charlotte Motor Speedway and this weekend's Duel in the Desert at the Dirt Track at Las Vegas Motor Speedway a little more tolerable.

"It's a long trip out here," Davenport said Friday after his flag-to-flag 40-lap victory worth $25,000 in the Vegas opener. "But after the two wins at Charlotte, that made it a whole lot easier coming out here."

The pole-starting Davenport of Blairsville, Ga., dominated Friday's event, keeping multiple second-running drivers in check including eventual runner-up Brandon Overton of Evans, Ga., who was 2.089 seconds behind at the checkers.

Davenport will gun for a bigger payday Saturday — $50,000 is the winner's purse — in a 77-lap race that closes Duel in the Desert action.

In Friday's 40-lapper, Tim McCreadie of Watertown, N.Y., was third in giving Longhorn Chassis a sweep of the podium while Bobby Pierce of Oakwood, Ill., who pitted with a flat tire on the 12th lap, ended up fourth. Josh Richards of Shinnston, W.Va., who ran as high as second in his Boom Briggs-owned ride, settled for fifth.

Davenport got the jump on fellow front-row starter Billy Moyer and used the high groove to develop comfortable leads over Moyer (laps 1-9), then Pierce (10-12), then Overton (13-22), then Richards (23) and then Overton again (34-40) at the 4/10-mile oval. The frontrunner wasn't sure exactly what was going on behind him, but he was confident in his Double L Motorsports ride as he deftly maneuvered through traffic.

"I feel like I was pretty decent on a long run and I could slow up a little bit and try to save my tire in case somebody was closing in. I'm the first one to traffic, so then I've gotta pick my lines and go through 'em," Davenport said. "But, you know, (slower drivers) did a great job. They've must've been watching the flagman, because it seemed like just about every one of 'em moved out of the way once I got there. I appreciate the lapped cars racing me like that."

Things went smoothly in the 40-lapper, but with double the prize money on the line Saturday he'll keep a close eye on conditions.

"Obviously (the track surface) didn't rubber tonight, so that's what the main concern's been since we've been here all week. We'll just see," he said. "The track guys done an excellent job tonight — from where I was, it was really good. I don't know how (the rest of) the race went, but I'll go back and I'll watch the video of it and see areas we can improve on.

"I think we can get our car a little bit better. Obviously I think the cushion was the fastest way around, so that's where I stayed. I run the bottom a couple of times, but I just didn't feel like there was as much speed there. ... Once again, my guys gave me a great car, and I didn't screw it up too bad."

Overton never took a serious shot at the leader in starting third, slipping back to fifth early, then working his way back toward the front.

"I was just better down (lower) in the racetrack. I couldn't run the top as good as (Davenport) could," Overton said. "But it is what it is. I wasn't good enough to win. Congratulations to them, they did a great job. We'll give 'em hell tomorrow."

McCreadie said his car was "off a little," admitting that he "shouldn't have (chosen) the bottom on the one restart (that eventually dropped him to fifth), but I don't think it would've mattered. (Davenport) was way better than I was."

McCreadie did make up ground in the second half of the race, moving back into third against competitors "because once they started blocking me (it) kind of made them worse," he said. "At the end of the day, we've gotta get better. You drive all the way out here and third's pretty cool. But we just need to get better and we'll do our best tomorrow."

The 40-lapper was slowed by four cautions, none for serious incidents. Third-running Billy Moyer slid high in turn four with a flat tire to bring out the first yellow on the 12th lap (Pierce headed pitside after the yellow had appeared for Moyer).

On the 14th lap, Jeff Roth and Reid Millard tangled in the turn one with Millard requiring a tow truck.

Moyer slowed again on the 22nd lap with another flat tire and the fourth and final yellow appeared on lap 26, apparently for debris.

Notes: The Duel in the Desert is the third event of the Karl Chevrolet Double Down Triple Crown, which includes events at Bristol Motor Speedway and Texas Motor Speedway. … Four drivers in the Las Vegas field who also competed at Bristol and Texas — Brandon Overton, Bobby Pierce, Scott Bloomquist and Boom Briggs — will have their payoff doubled wherever they finish Saturday, raising the possibility of a $100,000 victory. … Josh Richards is piloting a second Boom Briggs car. ... Scott Bloomquist scratched after Friday's hot laps after experiencing terminal mechanical trouble. ... Late Models headlined a five-division card that includes modifieds.