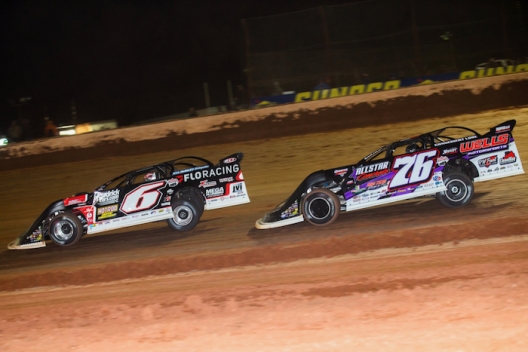 BRUNSWICK, Ga. — Just before Saturday's lone caution flag flew on lap 44 at Golden Isles Speedway, a showdown was brewing between the first two winners in the Super Clean Super Bowl of Racing presented by eBay Motors.

Brandon Overton of Evans, Ga., put a quick end to any such drama.

Overton saw a once-solid lead cut to nine-hundredths of a second by Devin Moran of Dresden, Ohio, on lap 43, but he pulled away on the restart and led the rest of the 50-lapper for a $15,000 payday and his 13th career Lucas Oil Late Model Dirt Series victory.

Overton took the checkers 3.018 seconds ahead of Moran in the Golden Isles finale with polesitter Kyle Larson of Elk Grove, Calif., finishing third after leading the first 27 laps.

"When you're in lapped traffic, if you do the wrong move, they can get you. The caution come out at the right time," Overton said in victory lane. "I seen (Moran) up top and I blasted through the middle right here on that restart and it didn't feel good, so I just got right back down (in the bottom groove). ... Two good race car drivers behind me. I'm just proud to stand up here with 'em."

Reigning Lucas Oil champion Tim McCreadie of Watertown, N.Y., was fourth while 15th-starting Tyler Bruening of Decorah, Iowa, charged into the top five for the second consecutive night at the 4/10-mile oval.

Overton couldn't help but note in victory lane that his back-to-back victories Friday and Saturday could've been preceded by a win in Thursday's opener, but he failed to make the starting lineup for that race after his fast qualifying time was disqualified for a deck-height violation — a rule newly added by the series for 2022.

"Man what a fun weekend," Overton said. "I just hate I didn't get it run the first night we were here, but it is what it is. We'll take all we can get."

Larson, the NASCAR Cup champion who moonlights for the K&L Rumley Enterprises Dirt Late Model, started strong from the pole. But before reaching the halfway mark, Larson had his hands full with Moran and Overton, who took the second spot on lap 19 and pulled alongside the leading Larson exiting turn two two laps later.

Overton slipped under Larson exiting turn two on lap 28 and blew by on the backstretch for the winning pass.

"I caught (Larson) there and I was just being patient," Overton said. "I didn't want to rough them up or hit him or anything. I know them guys wouldn't drive me that away. And I seen Devin and I said, 'Damn, I gotta go.' Devin was about to pass both of us.

"He cut me some slack (in turns three and four) and I just sent it off in there and there was a hole, Kyle (Larson) kind of hit it and washed up a little bit and I just got where I could go by him."

Overton kept Moran in check and led by nearly a full second on lap 40, but Moran chipped into the lead with a high-side run and was just .093 of a second behind the leader when a slowing Shane Clanton drew a lap-44 yellow, the race's only slowdown.

Moran's charge ended, however, as Overton checked out on the restart and cruised the rest of the way.

Moran's only hope? "I guess just no cautions, but that's the way it rolls," he said during his podium interview.

"(Overton) was (driving) the better race car. He could maneuver way better than I could. I was just kind of stuck (around) the top if I want to make up any speed, but to get two (runner-up finishes), damn, we'll take it," Thursday's winner Moran said. "Adjustments we made tonight weren't quite the right way, so we just got to go back and really think about a little bit and do something different."

Larson faded from contention for a time but regained the third spot from McCreadie in the final laps.

"(Overton) was really fast. I was out in the lead there and I knew my pace was way slow and didn't really exactly know what to do," Larson said. "I thought (the track) was cleaning off and getting OK around the bottom and I felt like if I just moved up in traffic, he was going to drive right by me.

"So I tried to hold them off as long as I could and they ate me up there. After that caution I felt a lot better. It was good to get a spot there on that restart and get to third and get another podium."

Notes: The series takes a day off before returning to action Monday at Bubba Raceway Park in Ocala, Fla., for the K&N Filters Winternationals presented by Optima Batteries. ... Nineteen of 28 starters completed 40 laps. ... During pace laps, cars ran in the missing man formation in honor of Scottsburg, Ind., resident Dewayne Ragland, who died Friday. Ragland was co-owner of the American Modified Series and an account representative with Motor State Distributing whose has a longtime presence in Dirt Late Model racing.

With Friday’s cloud cover gone, leaving little natural insulation to cover the southeast Georgia sky, it’s the chilliest night of the Super Clean Super Bowl of Racing presented by eBay Motors at Golden Isles Speedway, with the high of 46 degrees peaking the mercury at 3 p.m. … Reigning NASCAR Cup champion Kyle Larson of Elk Grove, Calif., was the overall fastest qualifier at 14.856 seconds. … Other heat race polesitters are Tim McCreadie, Jonathan Davenport, Devin Moran, Brandon Sheppard and Hudson O’Neal. … Brian Shirley of Chatham, Ill., spent some of his time leading to the start of Saturday’s action standing in front of his spring smasher. Still trying to get used to his new Longhorn, Shirley finished 13th in his consolation race Friday, well short of making the feature event. “It’s just the new car blues. I made a change that didn’t help the car,” said Shirley. He added that there’s no time like the present to start getting used to his new Longhorn. Anything he can learn during Georgia-Florida Speedweeks that can help him when he returns to the midwest will put him that much further ahead. “I was talking to Devin Moran and he said it took them a year and a half to learn exactly what they needed to do to their (Longhorn). You’ve gotta start somewhere,” said Shirley. … Hall of Fame chassis builder Barry Wright of Cowpens, S.C. was at Golden Isles this weekend helping customers. Wright said he was impressed with the turnout, but cautioned that an unstable economy could easily effect racing at the local level this summer. “You can have a (budget) for the season and this trip right here could use all of it before the season gets started. The season runs so long and starts so early, that the money a team does have (won’t) stretch as far.” … Mark Whitener of Middleburg, Fla., is one of a couple drivers pulling double duty this weekend. Whitener, who was forced to change an engine in his Big Frog Motorsports entry, said running both the Super Late Model and the Crate Late Model didn’t really give him an advantage this weekend because the cars — one a Rocket and one a Savage — drove so differently.