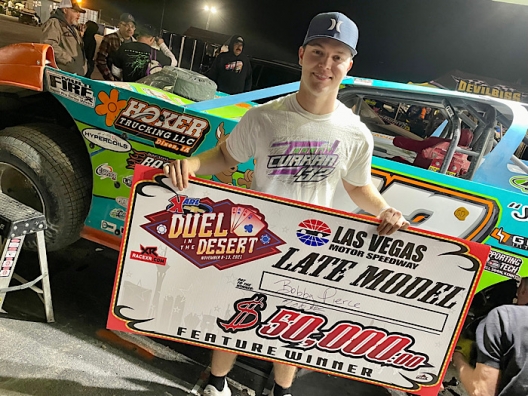 "Just don't get nervous," the Oakwood, Ill., driver told himself. "Don't think about that. Just run the race."

Dialing back the pressure, the 24-year-old standout Super Late Model racer pulled away in the final stages to grab a $50,000 winner's purse along with a $50,000 bonus from the Karl Chevrolet Double Down Triple Crown program, which doubled Las Vegas earnings for four drivers who had also competed in XR-promoted events at Bristol (Tenn.) Motor Speedway and Texas Motor Speedway in Fort Worth.

"This weekend I felt like were the fastest car. Whenever you have a really good car, the wins are going to come, and this year they definitely have," Pierce said. "This is my 21st win of the year. It's a crazy year. With those first two World of Outlaws victories and now this, this is awesome."

Josh Richards of Shinnston, W.Va., who piloted the second car of fellow Rocket Chassis driver Boom Briggs, rallied after changing tires to finish 2.337 seconds back in second place while Ricky Thornton Jr., who pitted for a lap-10 flat tire and lost a duel with Pierce for the lead after a lap-55 restart, settled for third.

Hall of Famer Billy Moyer of Batesville, Ark., was fourth and Johnny Scott of Las Cruces, N.M., was fifth in a race where two favorites — Friday's $25,000 winner Jonathan Davenport of Blairsville, Ga., and Friday's runner-up Brandon Overton of Evans, Ga. — weren't around at the finish.

Davenport led laps 2-54 but, after white smoke appeared from behind his car several laps earlier, he jumped the turn-three cushion and his No. 49 was towed off the track, robbing him the chance to complete a weekend sweep.

Overton's chances for a $100,000 payday — he was also eligible to double his earnings — were dealt a serious blow before the green flag fell. His left-front wheel came off during pace laps and he was required to give up his outside front-row spot and start on the tail. He reached the 11th spot but pitted with a flat right-front tire during a lap-26 caution and retired on lap 39.

While Thornton led the first lap, Davenport slipped past on the second lap and was fully in command for the next 53 laps, but signs of trouble wafted behind his Double L Motorsports car in the form of white smoke. Davenport's inglorious exit put Thornton out front for the lap-55 restart, but Pierce dove under Thornton in turns three and four and outdueled Thornton over the next several laps and was in control after another restart four laps later.

"Thornton really made me get up on the wheel. He was fast," Pierce said. "When I saw J.D. smoking, I kind of figured it was a matter of time. I was like, 'Man, if I can just pretend I'm in the lead right here and not worry about him and run my own race ...' And then I had a bad restart. Thornton got around me and from then on, it was a race."

Richards, who normally pilots a Clint Bowyer Racing entry, ended up wresting the second spot from Thornton on the 66th lap and earned $20,000 for his runner-up finish as he survived the tricky high groove.

"It was pretty treacherous up there. That was the only shot we had. I was trying to be conservative early and run a little bit, and I just felt like I had a left-rear tire going down, so we came in and put tires on and made a couple of adjustments there," Richards said. "The only shot I had was to get up on that top — and you saw (Davenport), it was so, so treacherous up there — but Bobby did a great job and we'll absolutely take it.

"I can't thank Boom Briggs enough for this opportunity. He's a good friend of mine and the guy doesn't get enough credit for as cool as he his and the good man that he is."

Thornton's car suffered minor right-rear damage when he made contact with Davenport's car after he'd jumped the cushion, causing "a little bit" of issue with his car's handling.

"I started getting a little (loose) there into (turn) one. But, you know, Bobby ran a good race. He slid me clean, so I wasn't doing to dirty-slide him," Thornton said. "So I left him a lane. He was a little better there at the end. I got that flat early, and I really had to charge hard to get back to the front. It didn't work out for us. We ran third and we'll take it and keep going.

"It kinda sucks J.D. got over the cushion there and that all happened. I was really hoping to get to race with him."

Pierce, among a handful of drivers who didn't pit, enjoyed his Las Vegas journey.

"Huge thanks for XR for letting us race out here and putting these events on. I can't say enough about this racetrack," he said. "I said it last night, the track was great, and it just provided such good racing for how big this track is. That's really hard to find for, you know, a half-mile to have this good of racing.

"So just hat's off to everybody at the speedway working the track and making the calls on souping up the track early. It made for a helluva feature."

The race was slowed by 11 cautions, first for a bad start and then on the seventh lap for a slowing Scott Bloomquist.

A lap-10 caution appeared when the third-running Thornton had a flat right-rear tire and fourth-running Chris Ferguson's right-rear flat drew a lap-26 yellow.

On the 33rd lap, Billy Moyer Jr. slowed after contact with Rusty Schlenk and puled to the pits for service and tow laps later, Bricen James stopped outside turn two for another caution flag.

Bloomquist brought out another caution when he slowed on lap 42 and five laps later Justin Duty slowed.

The ninth caution appeared for Davenport's demise on lap 54 and yet another caution flag dropped on lap 59 when Jason Papich had a flat right-rear tire.

The final caution flew on lap 63 when sixth-running Tim McCreadie, who held the second spot from laps 7-25, ended up facing the wrong direction in turn two.

Notes: Pierce's previous richest winner's purse was $53,000 in 2019's Silver Dollar Nationals at I-80 Speedway in Greenwood, Neb. ... His previous high this season was $30,000 in WoO action at Boone (Iowa) Speedway. ... Pierce's previous victory came Sept. 25 at Spoon River Speedway in Banner, Ill. on the MARS Racing Series. ... Ten drivers finished on the lead lap. ... Cody Laney, whose team had to swap transmissions before Saturday's action, retired just after halfway. ... Modified ace Bricen James was piloting Darren Coffell's No. 46 at Las Vegas; he retired after 33 laps. ... Next season's Duel in the Desert will cap the inaugural XR Super Series event, a new national tour with $25,000- and $50,000-to-win events.