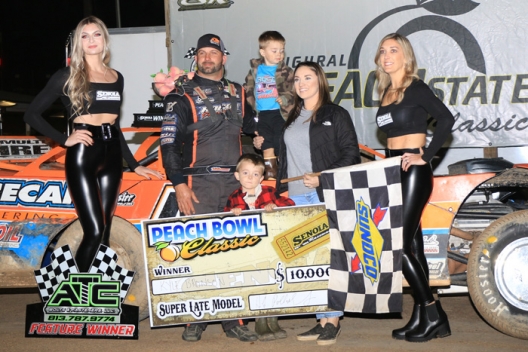 SENOIA, Ga. (Nov. 12) — When Kyle Bronson outran Hampton, Ga.’s Ashton Winger to win the fourth heat and gain a starting spot on the outside front row of Friday’s Peach Bowl at Senoia Raceway, Bronson served notice that Winger, who won all five special events he entered at the 3/8-mile oval just 40 miles south of Atlanta this season, was indeed beatable. Bronson, of Brandon, Fla., backed it up in the feature.

Edging ahead of polesitter Chris Madden of Gray Court, S.C., at the flagstand on the opening lap, Bronson went on to lead all 25 circuits for a $10,000 victory to kick off the weekend’s Peach State Classic, which features a 75-lap, $52,052-to-win finale on Saturday.

Bronson finished 2.308 seconds ahead of Madden, who was comfortably ahead of fourth-starting Mike Marlar of Winfield, Tenn., who improved one position to finish third in the caution-free main event. Spencer Hughes of Meridian, Miss., fell to fourth after starting third, while Winger completed the top five after starting eighth.

Bronson earned his first win and just his fifth top-five finish since winning the Lucas Oil Series-sanctioned $53,000-to-win Imperial Tile Silver Dollar Nationals at Nebraska’s I-80 Speedway on July 24. He won Friday’s race at Senoia in much the same way he did I-80’s crown jewel, with a masterful drive around the track’s top side. Bouncing off the concrete in a shower of sparks nearly every other lap, Bronson pulled away from Madden and was never seriously challenged. Thanks to two hair-raising moves in traffic, Bronson didn’t even give ground when he caught back markers.

“My car was pretty good there. I went through the middle the first part of the race and my guys told me to get up top,” said Bronson. “I got up top and I was really good. I was kinda just cruising there and trying to set the pace of the race. I kinda just hit my marks every lap and I felt like my car was really good, you know.”

His marks must have been tattooed on Senoia’s big yellow outside wall, because lap after lap, that’s where he ended up as he steadily increased his advantage over Madden. He stretched his lead to 1.202 seconds by lap 10. By lap 20, his lead reached its peak of 3.152 seconds.

“We set our car up to kinda run the middle of the racetrack. (The track) had that lip up there and Kyle, he’s one of the best when it comes to running the top,” said Madden. “He was able to lay it up there and get it done. It was a short race tonight and he had a good race car. We had a good race car ourself, we just couldn’t get to the lead there on the start.

“He did a good job of keeping his momentum up there and I just never could clear him so I could run up off the corner. Starting on the inside it’s tough to get the lead here. The outside guy’s definitely got the momentum advantage there.”

After getting by Hughes on lap two, Marlar seldom got within striking distance of the two frontrunners. He managed to close the gap to under a second only twice, drawing to within 0.598 of a second behind Madden on lap 20. But Madden began to ease away again on lap 21 and Marlar, who along with both Bronson and Madden praised the track prep, couldn’t get any closer.

“We were using all the racetrack that’s for sure,” said Marlar of Senoia’s slippery surface. “It was a good track. Congratulations to Kyle and Chris. It was fun racing with them.”

Neither Winger — the odds-on favorite to take Saturday’s gargantuan top prize — nor self-declared favorite Tyler Erb of New Waverly, Texas, were factors in Friday’s short-distance affair. Winger, who has five special-event victories at Senoia this season, including an Oct. 2 World of Outlaws win, was the overall fast qualifier before finishing second in his heat to Bronson to earn the eighth starting spot in the feature. Erb, who won the third heat and started fifth in the feature, traded spots with Winger four times over the first eight laps before finally giving way for good on lap nine. He ended up settling for sixth.

Notes: Fifteen of the 24 starters finished on the lead lap. … Bronson said winning on Friday guaranteed nothing on Saturday. “These deals are tough. These guys here are the best guys in the country,” he said. “You could be a hero today, a zero tomorrow. So we still gotta work, put our head down and go to work. Tomorrow’s a whole new day. Anything could happen.” … Madden said he felt good about his chances in Saturday’s 75-lapper. “We learned some stuff tonight,” Madden said. “We tried some stuff and we’re pretty good right where we’re at. Thanks to Bubba (Pollard) and them. They give us a great racetrack tonight. Hopefully they can give us this (Saturday) night and it won’t rubber up and we can have a great race.” … Shane Clanton of Zebulon, Ga., and Michael Page of Douglasville, Ga., both crashed in separate single-car incidents during the second heat and scratched from their consolation race. Clanton broke a driveshaft after jumping the cushion and Page suffered heavy right front damage after tagging the wall in turns three and four. ... Jimmy Owens of Newport, Tenn., debuted a new Longhorn Chassis in finishing 17th; his Ramirez Motorsports entry has been a Rocket Chassis in recent seasons.