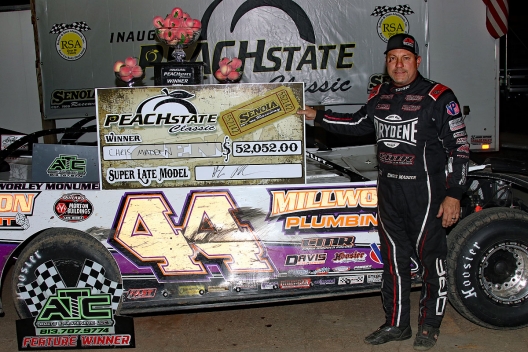 SENOIA, Ga. (Nov. 13) — There’s a 25-lap strategy and there’s a 75-lap strategy. Chris Madden’s long-distance strategy is clearly better than its short run counterpart. Madden, of Gray Court, S.C., knew getting the lead on the opening lap of Friday’s 25-lap race at Senoia Raceway would be critical. When he didn’t, he settled for a runner-up finish behind Kyle Bronson of Brandon, Fla.

Madden also knew that while taking an early lead in Saturday’s inaugural 75-lap Peach State Classic would be helpful, it wouldn’t be the end of the world if he didn’t. So Madden — who was scheduled to start sixth but rolled up to the fourth starting position when mechanical woes sideline Bronson just before pace laps began — bided his time waiting for the right moment to take the lead. The result: a one position improvement from Friday and a career-high payday.

Taking the lead on lap 32 from Mike Marlar of Winfield, Tenn., Madden led the rest of the way, finishing 1.841 seconds ahead of Marlar for a career-richest $52,052 triumph. Marlar, who started fifth in the unsanctioned event before surging ahead to lead laps four through 31, dropped to third on lap 68 but retook the spot from Ashton Winger with three laps remaining and held on for a runner-up finish. Winger, of Hampton, Ga., completed the top three after starting second, while Tyler Erb of New Waverly, Texas, dropped one position and finished fourth and Ryan Gustin of Marshalltown, Iowa, improved two spots to complete the top five.

Winger led the first three laps from his outside front row starting position, but couldn’t keep Marlar or Madden behind him in the early going.

“Mikey took off right there and he was extremely fast and I couldn’t keep up with him there,” said Madden, who grabbed second from Winger on lap six. “(Marlar) was able to stay in the grip down there and I really hadn’t made it down there to the grip yet. We got some green flag (laps) going and I started coming back to him. We had that one restart there and I found a little something down there in the middle and got to rolling pretty good and was able to get back to him and get the win.”

The race’s lone restart came on lap 20. By that time each of the top-five finishers had already maneuvered their way into the top-five running order. Madden, running second at the time, opted for the outside lane on the restart, which helped him find the drive he needed to maintain his spot. After that, he stayed close to the leader to take advantage when Marlar had to wait as his car drifted up the track exiting a turn.

“It was real wide and slick at that time, so I chose the top so I could use the banking and get me a good start and I was able to get back to second there,” said Madden. “Everything went our way tonight. We had an outstanding race car.”

Marlar knew once Madden got the lead, it would be difficult to wrestle the top spot away.

“Chris was just a little better,” said Marlar. “I was way too free on entry and I have been all weekend long. I was trying to correct it, but I gotta work on my car to get that fixed. Chris did a good job. I know he was faster. I could hear him, I felt him up under me two or three times there. I just was really loose in. I chased it up the track a little bit and he got under me. My only hope there at the end was when it rubbered and that 28 (Dennis Erb Jr.) was making it hard on him, as hard on him as he possibly could.”

After closing in on Erb Jr., it took Madden a handful of laps to get around the Carpentersville, Ill., driver. Before either could feel any pressure from Marlar, however, Madden cleared Erb Jr. to gain some breathing room. Marlar then surrendered the second spot as he and Erb Jr. made contact while Marlar attempted to go by in turn two.

“(Erb Jr.) was racing the fire out of Chris and then I felt like he was trying to wreck me or something coming off the corner, cutting into me,” said Marlar. “Anyway, I finally got clear of him and Ashton (Winger) passed me during that and I got by Ashton in the last couple laps luckily. It was definitely a really slick racetrack and there at the end it got kinda one lane around the bottom. But you know, it’s really cold weather and they can’t really do much watering or anything on it. They just give it to it the best they could, but, you know, it’s too cold to water it. It’d never dry up. But anyway, it was a fun race there, fun while it lasted.”

A disappointed Winger, who was trying to defend his home turf while chasing what would have been a career-best payday for himself, seemed less enthusiastic during his post-race interview. Entering the weekend, Winger was 5-for-5 at Senoia this season, winning every special event he’d entered at the 3/8-mile oval in 2021. But a fifth-place finish on Friday snapped the streak.

“Congrats to Mike and Chris. Chris was definitely probably the better car there,” said Winger. “We went a little wrong on tire and then, I don’t know, they tried to give me second there and I couldn’t hold on to it. I don’t know. It’s tough. Chris was really good and so was Mikey and I know Terbo (Tyler Erb) kept showing me a nose there. I really felt the racetrack was gonna be a little bit wider than it was and it never materialized. Really that’s you can say. The car was good. This is gonna be a hard pill to swallow, but it’s racing. It’s humbling and again, congrats to Chris.”

Notes: Madden’s $52,052 winner’s share of the purse was $2,052 better than his previous career-high victories. He had a pair of $50,000 crown jewel wins in 2019: the USA Nationals at Cedar Lake (Wis.) Speedway and the North/South 100 at Florence (Ky.) Speedway. … It was Madden’s sixth win of the season and first since winning three straight World of Outlaws races May 8 and May 21-22. … Madden has had at least six wins each year since 2004, winning only six just one the time (2010). “(This is) a great way to end the season. We struggled a little bit there from midway on,” Madden said. “We were real competitive, we just never could get back to where we needed to win races. We done some homework last week for Charlotte. We found some things. We were pretty decent over there and we went home and worked some more and we had an extremely good race car tonight.” … Madden made a point to thank sponsors Billy Franklin (Franklin Enterprises), Jamie Henderson (Henderson Amusement) and Mike Millwood (Millwood Plumbing), who were all in attendance on Saturday. ... Polesitter Payton Freeman of Commerce, Ga., finished 22nd after completing only 32 laps. The 2021 Southern All Stars champion never led a lap and was running fourth at the end of the first lap. … After mechanical gremlins struck Bronson before pace laps every driver from sixth on on back on the outside row — including Madden — moved up a row. … The race was slowed by one caution, a lap-20 yellow for Tyler Millwood, who slowed with a flat tire. The Kingston, Ga., driver returned to the back off the back, but retired on lap 61, finishing 18th. … Sixteen drivers finished the race, with 15 on the lead lap. … Dalton Cook of Columbus, Ga., joined the field as a track provisional. He finished 24th after completing 19 laps.