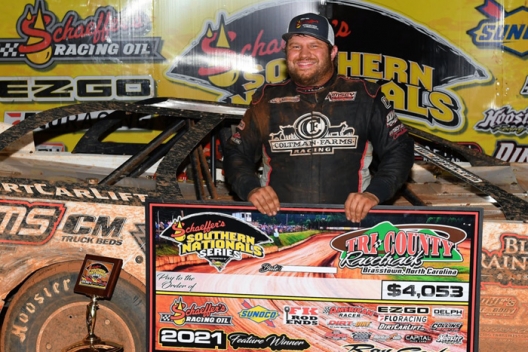 BRASSTOWN, N.C. — Grabbing the lead on the sixth lap after separate incidents knocked the front-row starters out of contention, Kenny Collins of Colbert Ga., raced to his first career Schaeffer's Southern Nationals victory Tuesday at Tri-County Racetrack. He earned $4,053 in taking the checkers 5.009 seconds ahead of series points leader Donald McIntosh

Collins became the sixth winner in six series races and thrust himself into title contention on the Ray Cook-promoted tour.

"It just feel awesome. I really don't know what to say. This is my favorite place to race in the world," said Collins, who fought brake problems. "I'm just glad I didn't give it away down there. I about scared myself to death, but I had to slow down and get back in rhythm. The race car's been awesome."

The race's two front-row starters were quickly out of contention.

Dale McDowell of Chickamauga, Ga., led the first five laps from outside the front row, but he got briefly hung up trying to lap Craig Greer, the cars disconnecting on the backstretch but not before several cars blew past McDowell. Officials placed him eighth on the restart.

Track record-holder Jensen Ford of Johnson City, Tenn., had the pole position for the 40-lap but spun in turn four on the second attempted start and had to fire from the tail.

The feature was slowed by seven cautions, the first two when full-field starts were called back. On the first one, Jamie Oliver briefly got out of shape and Benjamin Cranford spun exiting turn two. On the second one, polesitter Jensen Ford washed over the cushion in turn four after Dale McDowell's crossover move to edge ahead. Ford had to restart on the tail.

The third yellow appeared on the second lap for a backstretch scramble involved Jeff Neubert, Trevor Parker and Glenn Barnett, whose car was towed away.

The fourth caution appeared for the McDowell-Greer connection and fifth appeared on the ensuing restart when clint Hodges got the worst of a tangle between turns three and four that involved Tod Hernandez and Cranford.

The sixth yellow came out when Jamie Oliver slowed on the frontstretch on lap 33 and the seventh and final yellow was for a called-back restart.

"I was glad to see that (final) caution, because my brakes had completely quit," said Collins, who had a 3.2-second lead at halfway and a whopping 8.4-second lead before the lap-33 yellow. "(The brake pedal) just kind of went to the floor all of the sudden. I got down there and went to (push the brake) and I couldn't get the car to slow down, and I got the right rear up over that berm. Thankfully, I've done that here before, so I got it gathered up."

After a day off, the series concludes with four straight nights of action beginning Thursday at Boyd's Speedway in Ringgold, Ga. The final points events are Friday and Saturday at 411 Motor Speedway in Seymour, Tenn., and Tazewell (Tenn.) Speedway, each paying $10,053-to-win. Volunteer Speedway in Bulls Gap, Tenn., wraps up the tour Sunday with a non-points event, the makeup of the July 19 rainout.

Notes: Collins is the second first-time winner on the series after Josh Rice of Verona, Ky., who won the opener at Beckley (W.Va.) Motorsports Park. ... Ten drivers finished on the lead lap.

Correction: Shifts Ledford to Group A.